A Solvent Dries Up

Acetonitrile is in short supply, and chemists are concerned 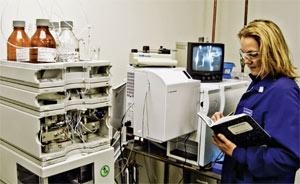 A SHORTAGE of acetonitrile is leaving chemists around the U.S. and beyond wondering how long their supplies will last and what their options will be if stocks run dry.

There are good reasons why the situation is making chemists feel vulnerable. Thousands of them use the polar solvent in high-performance liquid chromatography. It is also used in pharmaceutical synthesis and in the extraction of butadiene from streams of C4 hydrocarbons.

Laboratory chemical suppliers have been allocating acetonitrile to existing customers or not selling it at all. "The market is beyond short," says Jerry Richard of Purification Technologies, a Chester, Conn.-based firm that buys acetonitrile in bulk, purifies it, and sells it to laboratory chemical suppliers. "You have people scrambling around trying to get material. My phone is ringing off the hook."

Richard says the heart of the problem is that acetonitrile goes into applications that are healthy and growing. But its production is tied to another chemical, acrylonitrile, which is in decline.

And it is acetonitrile's status as a minor coproduct that has led to its present scarcity. Amin Dhalla, business director for Ineos Nitriles, says acrylonitrile production has been ebbing. Demand for ABS resins, used in cars, electronic housings, and small appliances, is slumping around the world because of the global economic slowdown. The acrylic fiber market is also on the decline, losing market share to polyester fibers. Operating rates at acrylonitrile plants are less than 60% globally.

COMPOUNDING the problem, Ineos has suffered from production outages over the past year. For example, its Green Lake plant was shut down in September in preparation for Hurricane Ike. Its Lima plant was down during the summer because of a lightning strike. Dhalla says the Texas plant will have more downtime early next year when the company brings a 20% expansion of its acrylonitrile capacity onstream.

John Radke, director of research essentials at lab chemical supplier Sigma-Aldrich, thinks the shortage will last through the second quarter of next year. He says his company prepared for the shortage by building up inventories and should be able to supply contract customers.

For Sigma-Aldrich and some other lab chemical suppliers, new customers are a different story. Radke says Aldrich is looking for acetonitrile supplies like anyone else is, and is paying six to eight times more than it did just in August. "New customers not under contract with Sigma-Aldrich will pay the fair market catalog list price," he says.

Chemists contacted by C&EN aren't panicking yet. Bruce S. Levison, a staffer with the Cleveland Clinic, uses about 1 L of acetonitrile per day for HPLC. He has about 20 L on hand and is awaiting word on an order he submitted with his lab chemical supplier for more. "I am not screaming that I can't do my work," he says.

David R. Liu, a chemistry professor at Harvard University, says his lab group planned ahead by stocking up. "I'm aware of the problem, but so far it hasn't had a major impact," he says. "If we go two months without being able to get any—that might be a problem."

If the acetonitrile shortage doesn't abate by early next year, chemists could adapt to alternative solvents like tetrahydrofuran or methanol. But Liu says for some applications, no solvent works quite like acetonitrile. "Unfortunately, substitution is not a viable option for some automated syntheses that are optimized to work in acetonitrile," he says.

Synthesis
Where has all the sparteine gone?
Business
Sellers Eye Upturn In Used Equipment Sales
Business
The Hunt Is On For Hydrochloric Acid
Share X
To send an e-mail to multiple recipients, separate e-mail addresses with a comma, semicolon, or both.
Title: A Solvent Dries Up
Author: Alexander H. Tullo
Chemical & Engineering News will not share your email address with any other person or company.