Custom manufacturer finds its footing through a focus on small molecules 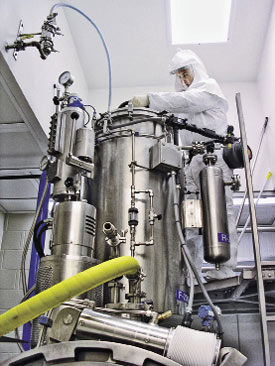 THE CASUAL OBSERVER of the fine chemicals industry can be forgiven for not knowing what to make of Cambrex these days. The custom manufacturer has overhauled itself considerably, adding and subtracting parts as the market changed, and it struggled to find the right course. Today, however, Cambrex appears to be settled into its own niche: developing, manufacturing, and delivering small-molecule pharmaceuticals.

Cambrex has taken a winding course to get there. After selling its Rutherford Chemicals business in 2003, the company said it would focus on serving the pharmaceutical industry. Then, in late 2004, Cambrex shifted gears and announced plans to transform into a drug company itself, only to abandon that strategy in early 2006.

The custom manufacturing industry is notoriously rocky, and the East Rutherford, N.J.-based firm can be pardoned for taking a somewhat schizophrenic path. Other players, notably Dow Chemical and DSM, also built and then abandoned their position in biologics manufacturing, and many companies simply left custom manufacturing altogether after finding the inherent sales fluctuations too much to take.

The leaner Cambrex now operates in its two traditional areas—custom development and manufacturing of new chemical entities and generic active pharmaceutical ingredients (APIs)—as well as two newer, high-growth ones: drug delivery technology and controlled-substance manufacturing. It operates out of four sites: Charles City, Iowa; Karlskoga, Sweden; Tallinn, Estonia; and Milan, Italy. Annual sales are around $265 million, a size that, according to Klosk, combines critical mass with the nimbleness to react to an evolving marketplace.

Like many of its competitors in custom development and manufacturing, Cambrex serves everyone from virtual biotech firms to big pharma, and it synthesizes molecules for preclinical testing through Phase III trials. But the company also acknowledges that it needs skills to set it apart.

For example, Cambrex has sunk money into its capacity to produce highly potent active ingredients, such as cytotoxics used to treat cancer. Partially because such molecules require careful handling, the segment has resisted some of the price erosion that plagues traditional API manufacturing.

Cambrex' custom development and manufacturing business still has room for improvement, industry observers say. Jim Bruno, director of the consulting firm Chemical & Pharmaceutical Solutions, gives Cambrex points for having the right-size reactors to manufacture today's more potent drugs. "But from a technology point of view, they still really could use some pizzazz. They don't have anything super hot that would really get people excited," he says.

Bruno suspects the company is eager to acquire technology that could remedy the problem. He also thinks Cambrex is well positioned to serve small- to medium-sized Western drug companies that are starting to seek manufacturing partners close to home rather than in China and India.

Meanwhile, Klosk is most excited about the prospects for Cambrex' burgeoning drug delivery and controlled-substances businesses. The drug delivery business is only about three years old, but it brought in roughly $20 million last year. And sales of controlled substances reached $10 million in the first half of 2008, compared with $15 million for all of 2007.

The drug delivery business is benefiting from a customer base that has grown beyond over-the-counter products into prescription drugs. Cambrex started out in the cough, cold, and allergy segment, helping customers launch five over-the-counter products that use its polymer-based system to improve drug stability, control active-ingredient release, or mask the bitter taste of drugs. The same system can be used to formulate orally dissolving tablets or films and has found its greatest success in smoking cessation products.

Klosk sees plenty of opportunity to apply the technology in the future. "I think we'll see oral dissolving tablets evolving into an oral thin-film market," he says. The company is also looking to expand its repertoire with transdermal and transmucosal delivery systems that would open up the pediatric and geriatric markets.

IN ADDITION, the drug delivery business has a nice synergy with Cambrex' other high-growth segment: manufacturing of controlled-substance APIs. At its Charles City plant, the company has Drug Enforcement Administration (DEA) licenses to make Schedule II-IV products, with a focus on pain management drugs. The holy grail of pain management is to better control the onset of relief, prevent abuse, and improve efficacy. These are problems that Klosk believes Cambrex' delivery technology can help solve.

And importantly, controlled-substance manufacturing is an exclusive club. Wary of narcotics falling into the wrong hands, DEA rarely hands out new manufacturing licenses. Cambrex has few competitors in the U.S. and none whatsoever in Asia. "I'm asked all the time, 'What about India? What about China?' " Klosk says. "Here, they're irrelevant."

Cambrex also finds promise in one of its newer investments: an R&D lab in Estonia it acquired early this year. Many of the firm's rivals have turned to China or India to gain a competitive edge, but Klosk believes Eastern Europe is a more attractive alternative.

The appeal, he says, is that as a member of the European Union, Estonia offers peace of mind around intellectual property. Moreover, it is in a time zone close to Cambrex' European customers, offers world-class scientists, and enjoys labor rates that are competitive with those in China and India. Although Klosk is keeping an eye on Asia, "I'm bullish on Eastern Europe," he says.

Bruno agrees that Eastern Europe is the right place to invest these days. "I might argue that working in Eastern Europe is cheaper than working in China," he says. Companies do need a position in China, Bruno cautions, whether it is through sourcing, a partnership, or a bricks-and-mortar investment. But "at the end of the day, you need to have representation in Europe as well, and Estonia gives Cambrex a nice low-cost center for development and, eventually, for manufacturing."

With its focus on small molecules and manufacturing in the U.S. and Europe, Bruno argues, Cambrex is finally on the right track to weather the ups and downs of the fine chemicals industry. "Their portfolio looks balanced, and I think they're in better shape from a size point of view," he says. "Overall, they're in a really nice position to do well."