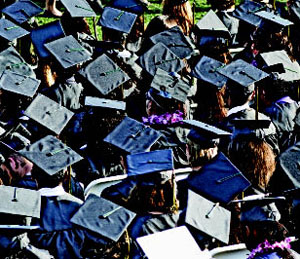 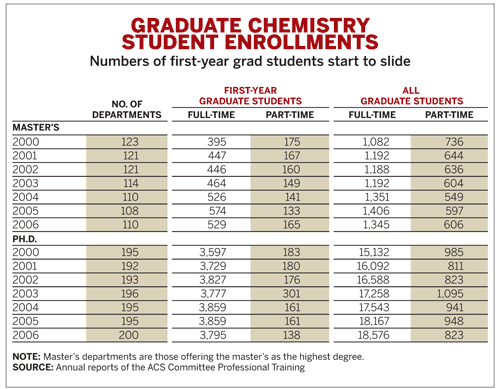 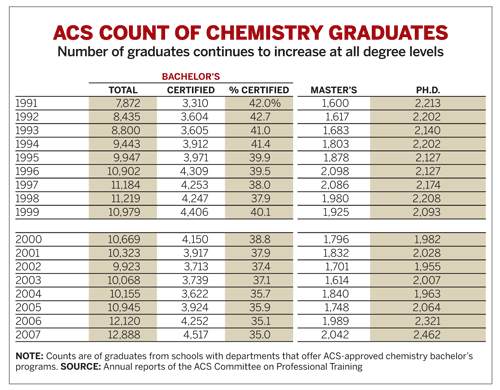 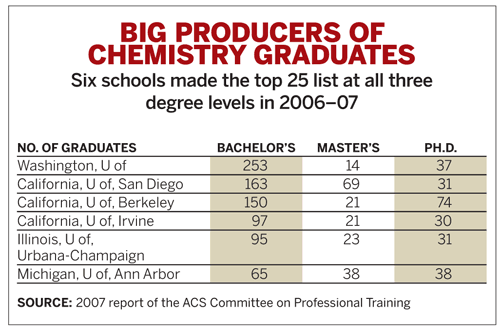 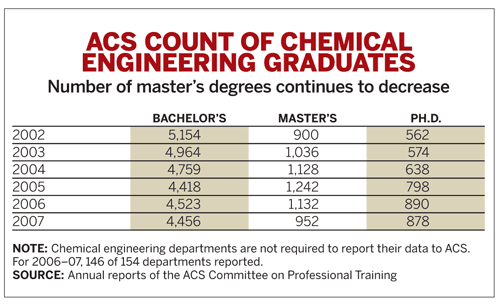 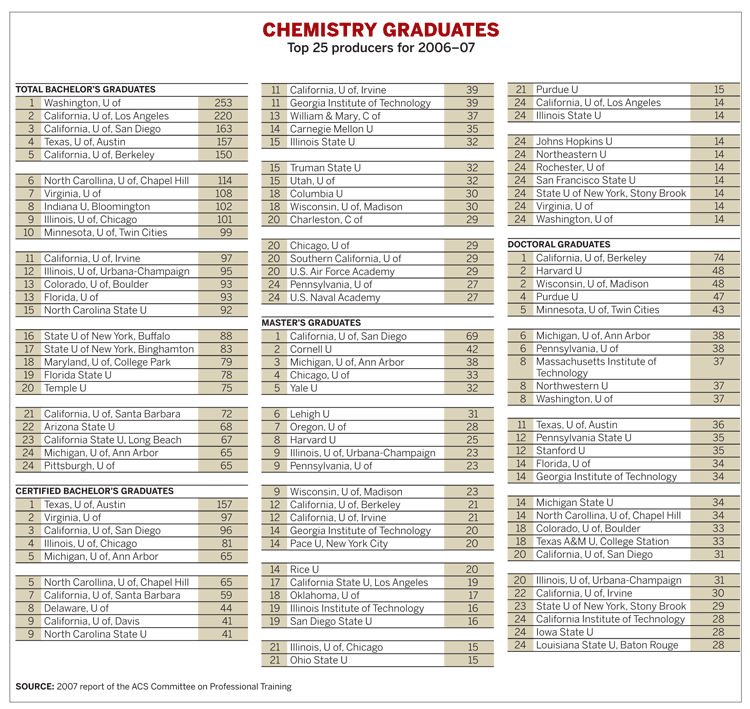 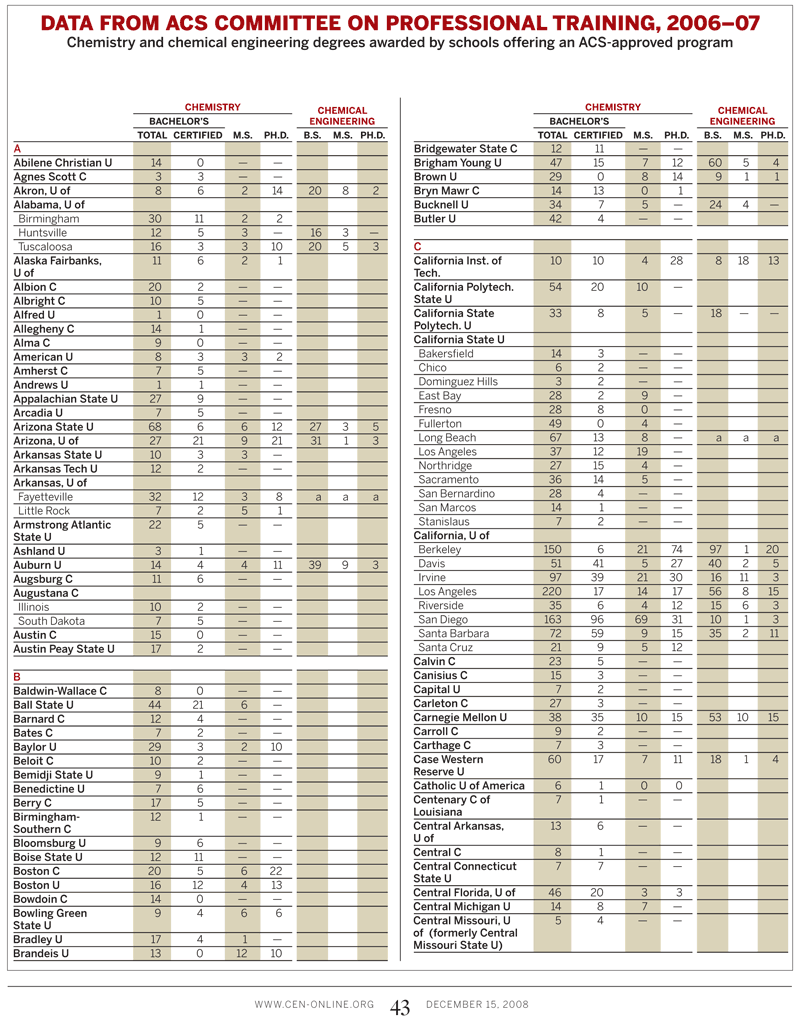 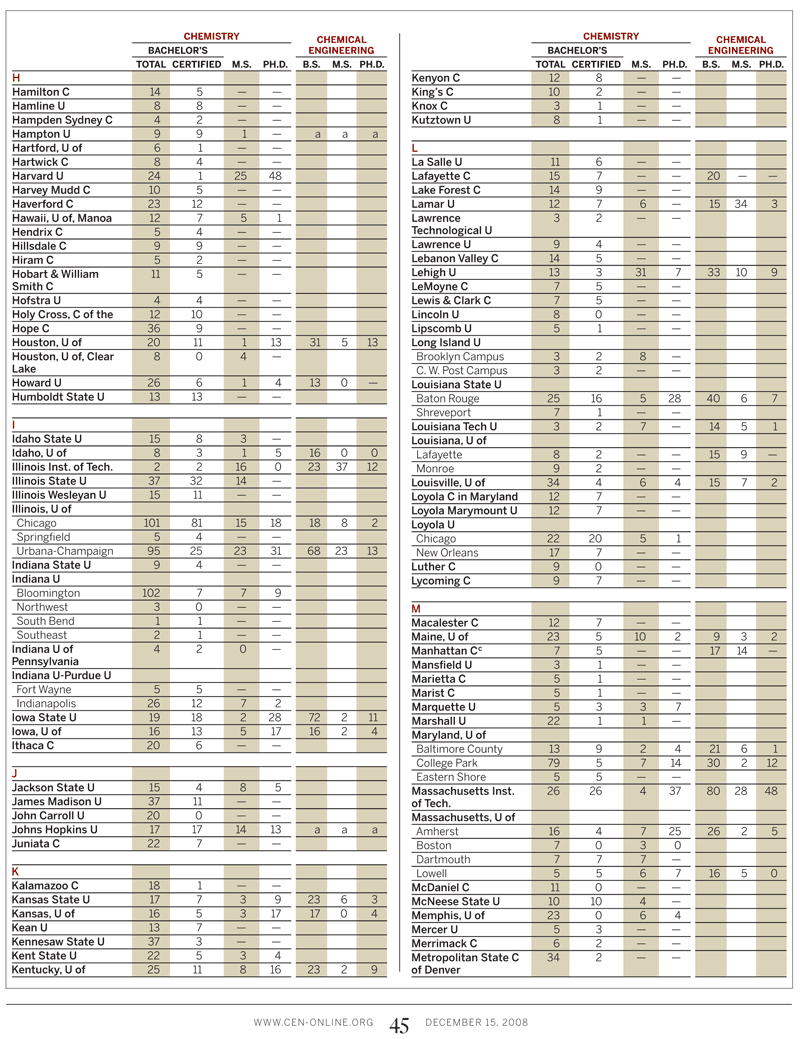 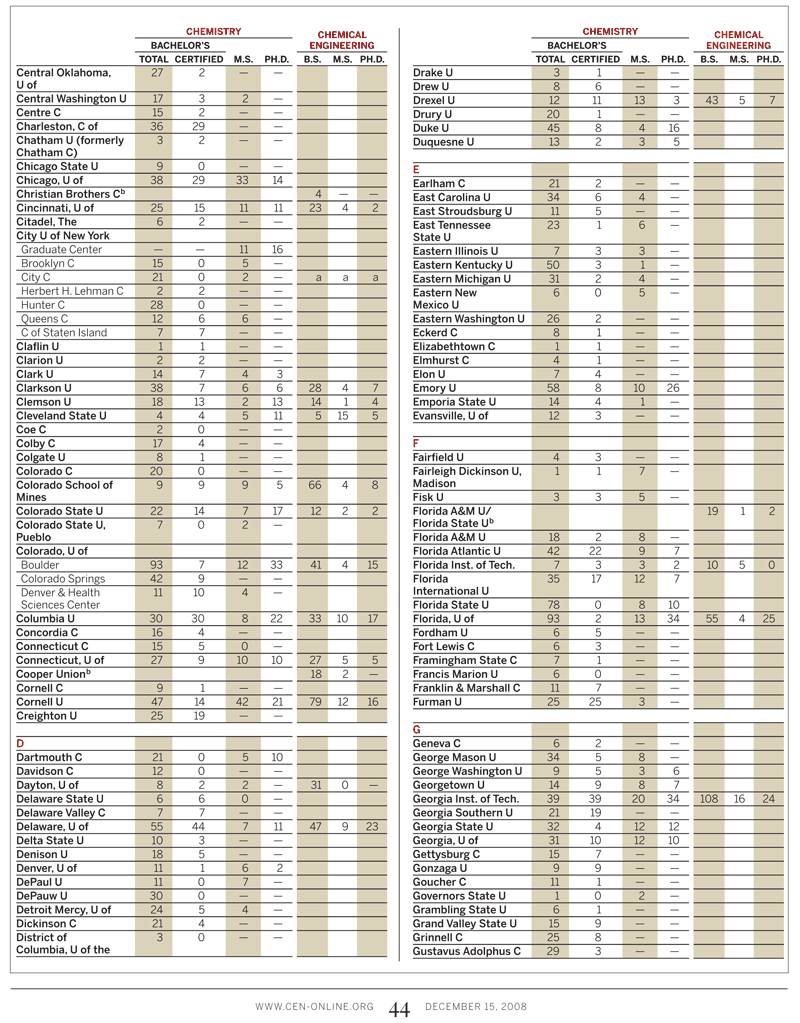 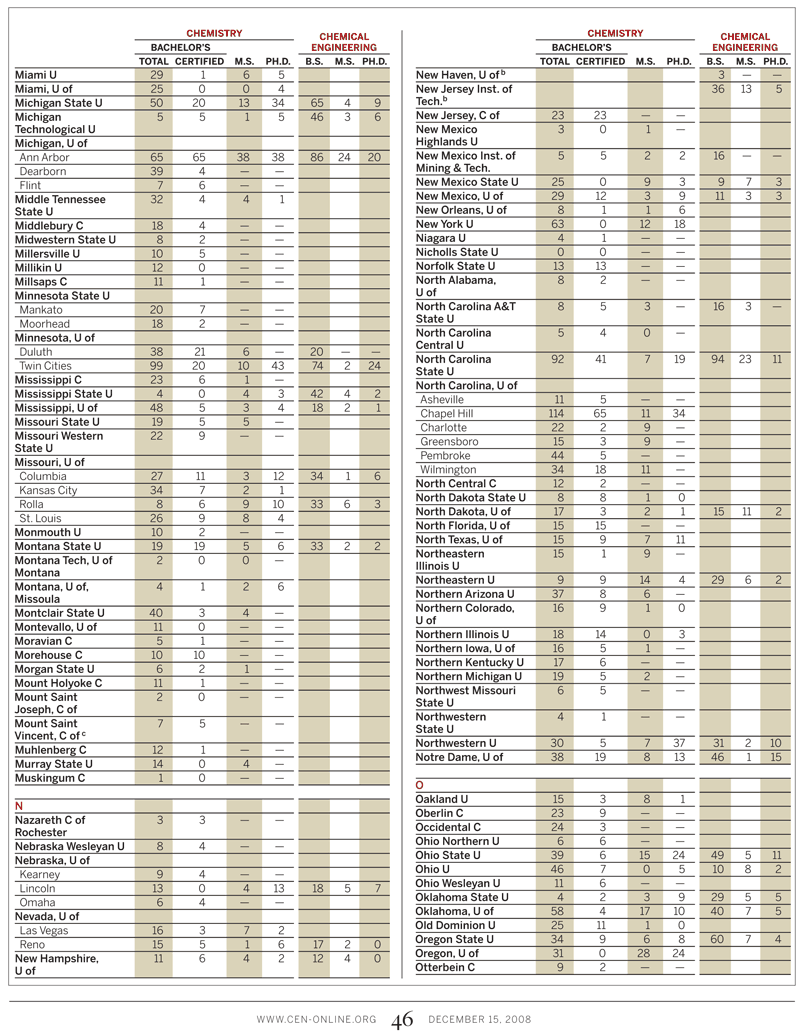 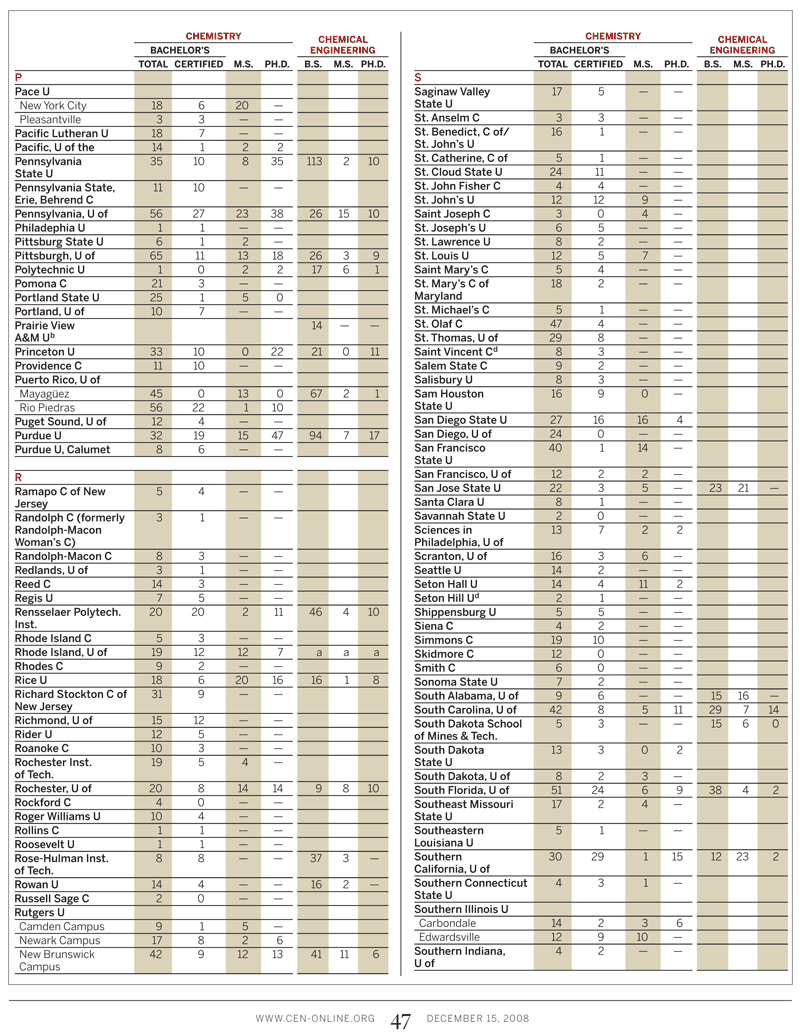 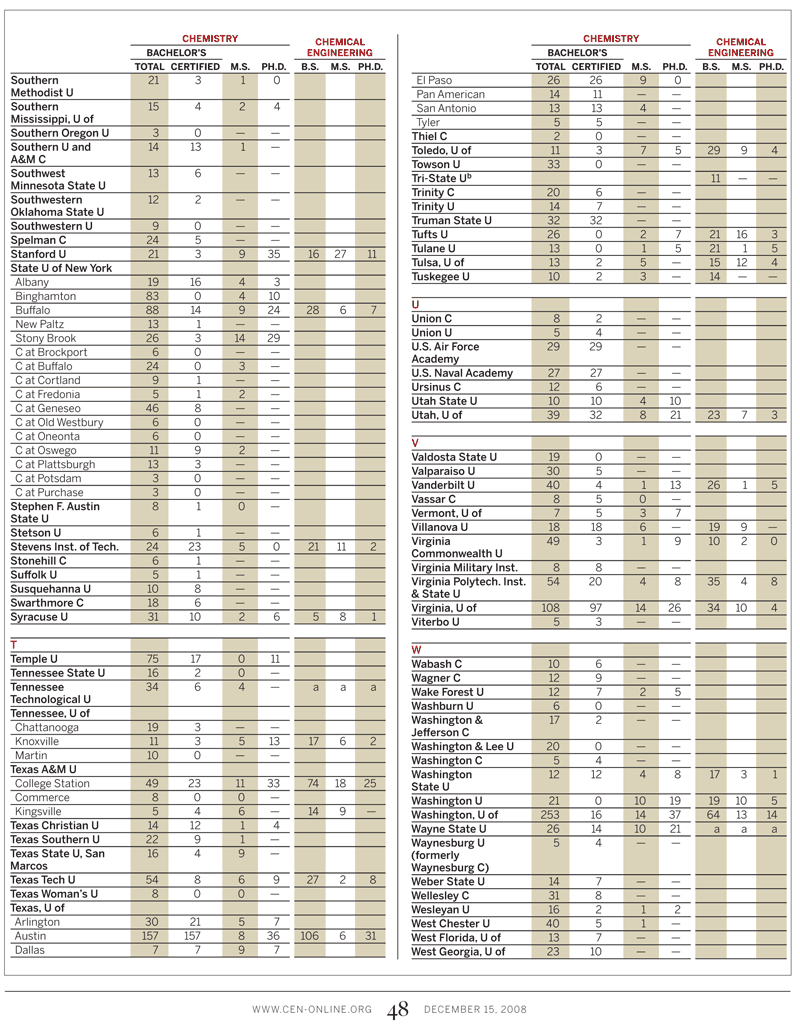 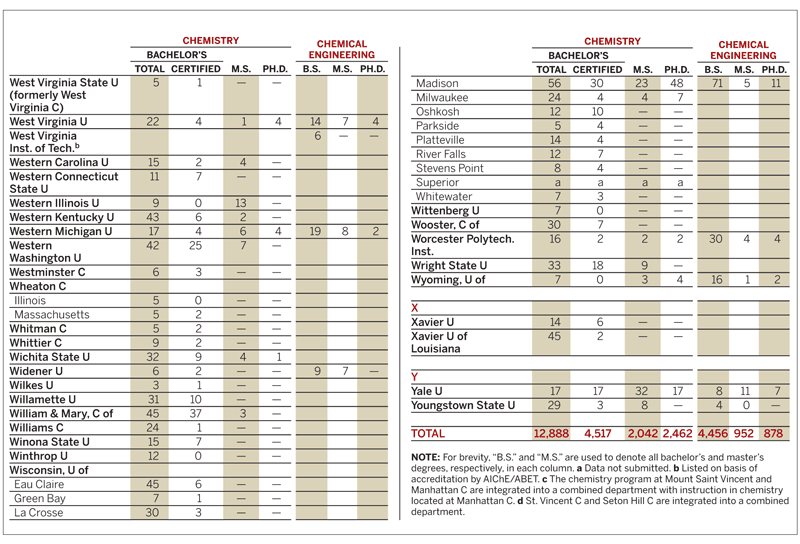 These are just a few of the findings in the latest report on graduate statistics in chemistry and chemical engineering from the ACS Committee on Professional Training (CPT). Under the direction of Cathy A. Nelson since 1992, the society's Office of Professional Training collects the reports. The office's technology specialist, Gary Woods, has compiled the data for the past several years.

Since 1941, CPT's primary function has been to assess, approve, and monitor undergraduate chemistry programs. ACS does not approve master's or doctoral programs. Colleges and universities apply to ACS for the society's approval and then must report annually to CPT all the degrees they award at all three degree levels. For the 2006–07 reporting year, 642 departments have ACS-approved bachelor's degree programs. Of course, some schools with chemistry departments have not applied for ACS approval, but CPT estimates that more than 90% of bachelor's degrees in chemistry come from colleges and universities that offer programs approved by ACS.

The school-by-school data for the 2006–07 chemistry and chemical engineering graduates are listed in a table beginning on page 43. The CPT data are also available at www.acs.org/cpt.

The bachelor's degrees that CPT reports are of two types: certified and noncertified. This is a determination made by the head of an ACS-approved department and not by ACS. However, graduates awarded certified bachelor's degrees are qualified for immediate full membership in ACS, whereas those with noncertified degrees are eligible for full society membership only after three years of professional experience or acquisition of a higher degree in chemical science. The requirements will change in January 2009 (C&EN, Nov. 17, page 7).

Policies on certification of degrees vary considerably among chemistry departments. For instance, all 157 degrees from the University of Texas, Austin, in 2006–07 were certified. In contrast, top-producer University of Washington awarded 253 bachelor's degrees, but only 16 of them were certified.

Enrollment of students in chemistry graduate programs remained high last year, but CPT recorded a slight drop in both first-year master's and doctoral students. For master's programs, full-time enrollment fell about 4% to 1,345 students, while part-time master's students rose 1.5% to 606 students. Part-time graduate enrollment has been down generally over the past several years.

the number of women getting chemistry degrees at all levels continues to rise, as it has for most of the past decade. Bachelor's degrees awarded to women in 2006–07 rose 2% compared with the previous year to 6,416 and master's degrees rose 2% to total 984. The biggest jump was in the number of doctorates awarded, a more than 9% increase to 908 degrees. Women received just under 37% of all chemistry doctorates awarded last year.

UC San Diego awarded the most chemistry master's degrees for 2006–07, with 69 degrees. That is far above the number two school, Cornell University, which reported 42.

UC Berkeley gave the greatest number of chemistry Ph.D.s in 2006–07, with 74 degrees. Other top producers of Ph.D.s shifted a lot from their positions in previous years. Harvard University and the University of Wisconsin, Madison, tied for second with 48 doctorates each, and Purdue University ranked fourth with 47. The biggest drop in number of Ph.D. graduates came from the University of Illinois, Urbana-Champaign, which ranked 20th with 31 doctorates, compared with 55 doctorates in 2005–06 and a number two ranking.

Graduate Education
By the numbers: Who’s going to chemistry and chemical engineering graduate school in the US
Careers
By the numbers: Who's going to grad school in chemistry and chemical engineering in the US 2006–16
Careers
Science Doctoral Degrees Trend Up
Share X
To send an e-mail to multiple recipients, separate e-mail addresses with a comma, semicolon, or both.
Title: Chemistry Grads Continue Gains
Author: David J. Hanson
Chemical & Engineering News will not share your email address with any other person or company.