Cause Of Heparin Woes Unclear 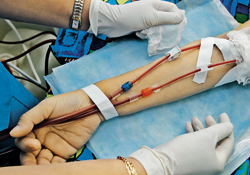 FDA AND BAXTER HEALTHCARE are searching, so far fruitlessly, for the cause of about 350 adverse reactions to Baxter's heparin drug, a blood thinner used, for example, by patients undergoing kidney dialysis. Four patients have died after receiving heparin.

Under scrutiny as possible contributors to the heparin problem are Baxter, its Chinese drug ingredient supplier, and FDA itself. Meanwhile, supplies of the critical anticoagulant could be in jeopardy.

Last week, FDA officials said agency inspectors were on their way to Changzhou SPL, a Chinese facility owned by Scientific Protein Laboratories, a Wisconsin-based firm that has been Baxter's main active ingredient supplier. Earlier, FDA started investigations at facilities run by Baxter in Cherry Hill, N.J., and by SPL in Waunakee, Wis., to find the source of the problem.

The Changzhou plant was never evaluated the way it should have been as a supplier of materials to the U.S., acknowledged Joseph Famulare, deputy director of FDA's Office of Compliance, during a conference call last week. "The wrong firm was put into the FDA database, and therefore [Changzhou SPL] was not evaluated or scheduled for inspection," he explained. Instead, a firm with a similar-sounding name was looked at by FDA's compliance office; this firm had recently been inspected and found in compliance, so no further action was taken. China's State FDA did not inspect the Changzhou plant because it makes export products only.

The lapse in oversight is particularly embarrassing for FDA since it has been under fire for its spotty record in conducting foreign inspections (C&EN, Nov. 26, 2007, page 38). "The problem was discovered within the past month," Famulare added. "To date, this is an isolated situation."

Meanwhile, FDA and Baxter are acting to protect public health. On Feb. 11, FDA issued an advisory to increase awareness of serious events that occurred in patients, particularly those receiving bolus, or large-quantity, injections of Baxter's heparin. The events include severe allergic or hypersensitivity-type reactions. Baxter, which supplies about half of the heparin sold in the U.S., has temporarily suspended production.

In use for nearly 70 years, heparin is isolated from animal organ tissues, generally from pigs. It is a complex glycosaminoglycan with a heterogeneous chemical composition and is thus difficult to synthesize. Researchers have been working on chemical or enzymatic synthetic routes, and low-molecular-weight heparins are available but may have different therapeutic effects.

Because the medical consequences of a shortage would be serious, FDA and Baxter have not issued a total recall, but chose instead to issue cautions around its use. Meanwhile, FDA is working with other manufacturers, including APP Pharmaceuticals of Schaumburg, Ill., to increase production. APP, which also supplies about half the U.S. market, uses multiple active ingredient providers, including one in China that Famulare says has passed FDA inspection.