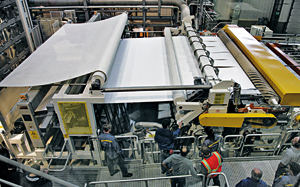 AS KEMIRA'S brand-new Chief Executive Officer Harri Kerminen sees it, his company put on a pretty good performance last year and is ready to meet any turbulence that 2008 might bring. That sums up the assessment he offered reporters at his first press conference, held in Helsinki last month to report the company's 2007 results.

Kurkilahti, who has a wide background in general industrial management, has a reputation in the Finnish industry as a tough, no-nonsense troubleshooter. He had been brought in as CEO in May 2004 with a simple assignment: restructure Kemira. He spent those years revitalizing what had become a rather dozy company in a country on the northern edges of Europe. He remains a senior adviser to the board until the end of this month, when his contract comes to an end.

"Kemira has made rapid progress in recent years, and numerous corporate acquisitions and disposals have shaped Kemira into a dynamic international group," said Chairman Pekka Paasikivi, when Kerminen was named as new CEO. "We are well-satisfied with the progress that has been made in Kemira under the leadership of CEO Kurkilahti."

In a marked contrast to Kurkilahti, Kerminen is an affable Kemira veteran who most recently was president of Kemira's pulp and paper division, the company's largest business unit. Although the company's December results fell far short of expectations, causing full-year 2007 operating profits to fall below earlier guidance, Kerminen's assessment of the company as a whole is encouraging. "Fundamentally, Kemira has a healthy business, considering that the world economy is not doing the best," he says.

"We have many programs and projects under way to increase sales and increase profitability," Kerminen continues. This year, he adds, "will be a challenging year for everybody in this kind of chemical industry. And it will measure who is capable of performing. When it is just a growth economy, managing is easy for everybody."

The company is starting to show the results of the restructuring that Kurkilahti led, Kerminen says. Helping the revamped company will be a revamped management team, roughly 70% of whom are new, he points out. "This is the biggest change we have ever had, that I can recall," Kerminen adds. "We need to do things better."

Kurkilahti, in an interview when he was still CEO, told C&EN that "the most important force driving the shift in the industry is globalization." Twenty years ago, he explained, Kemira was effectively living in a closed society. It was responsible for producing materials such as fertilizers and explosives at the request of the Finnish government to ensure national security.

"But that story ended about 15 years ago," he emphasized. And the changing social expectations in turn created opportunities for Kemira.

OF THE COMPANY'S assets 20 years ago, almost nothing has been retained, except its Tikkurila paints operations. "As a Finnish company, coming from a small country, we have to pick our niches," Kurkilahti said. And although the company's chosen businesses may not be in the fashionable life sciences or fine chemicals areas, they are solid and growing, he contended.

For example, he pointed out that Kemira is the largest producer in the global pulp and paper chemicals market, which is estimated at $33 billion and growing at more than $1 billion a year. In this industry, Kurkilahti said, the five biggest companies have about 25% of the world market. In five years, he predicted, those five will hold a much larger share.

In water treatment, Kemira Water Solutions is a major player in a $12 billion global business that is growing at about $900 million per year. Kemira focuses on coagulants but is also expanding its business in polymers for sludge management—an unglamorous but critical activity for cities big and small.

The specialty chemicals sectors in which Kemira competes are worth about $2 billion per year worldwide and growing at $300 million per year. Kemira's businesses include titanium dioxide—a business it considered selling last year but decided to retain—and organic salts and derivatives.

Only Kemira's eurocentric paints and coatings operations are a geographically defined regional business. The company values the region's overall paint sales at slightly more than $6 billion and figures they are growing at about $375 million per year.

Kurkilahti's revamping efforts depended heavily on acquisitions, particularly in the water treatment business. Among other deals, the company acquired businesses from Cytec Industries in October 2006 and Lanxess in April 2006. It purchased an 80% stake in China's Chongqing Lanjie Tap Water Materials in April 2007 and Brazil's Nheel Química in October 2007.

Kurkilahti was a good choice for CEO at the time, says Timo Jaakkola, a financial analyst with Öhman Group, in Helsinki, as the company went through about 30 divestitures and acquisitions. "It's a miracle the company hasn't messed up the results," he says. "There has been a lot of integration work going on in the company.

"I think that strategy-wise, they've done a great job," Jaakkola continues. "But the fourth quarter was really poor. Apparently, it was because Kemira's costs ran ahead of their price plans at this point."

Kemira At A Glance

DESPITE THE rapid activity, Kurkilahti maintained that he set tough criteria for acquisitions. "Acquisitions must give a strategic fit," he said, a common enough goal. But more important, they also "must increase earnings per share from year one. We had been growing so fast in the past, we could not deliver a better earnings-per-share early on. Now we must."

The company's owners, he said, had told him: "We want more from Kemira. Please make it a global business." At one time owned by the Finnish government, Kemira is slowly transferring to private hands. In April 2006, for example, the government's stake was about 49%, down from 55% a year earlier; following the sale of a major shareholding in August 2007 to Oras Invest, a private Finnish investment group, its stake is now about 17%. Major shareholders today are international investors, which hold just over 15% of Kemira, and Oras, which owns an 18% stake.

With less government oversight, the company has been able to engage in the kind of job and plant cutting needed to compete globally. One thing that Kurkilahti did not trim, however, was Kemira's R&D budget, set at about 2.2% of sales. That rate has continued throughout his term, and even edged up slightly, to 2.3% of sales, in 2007.

Kurkilahti also spurred the company's geographic expansion. In pulp and paper, the company is targeting new mills being built in China, Brazil, Mexico, and other—for Kemira—nontraditional countries. For example, it recently opened a paper chemicals plant in Fray Bentos, Uruguay, to supply a new pulp mill built there by the Finnish firm Metsä-Botnia.

And once Chinese producers start replacing their old paper machines with Western-standard equipment, "there will be competition" that Kemira intends to play a part in, Kurkilahti said. "You don't just go to an area and build a paper chemicals plant and start supplying," he pointed out. "You have to have opportunities in supplying customers. It's a big investment. You have to go to the customer."

And when a company goes to the customer, he added, it must be able to provide deep technical know-how. "Otherwise those new producers will go elsewhere. You keep them by putting more and more special knowledge together for their plant."

Kurkilahti's acquisitions and investments have taken the company's gearing ratio of net debt to equity to an eyebrow-raising 92%, significantly above what the company's executives say is a "comfort zone" between 40 to 80%. Yet, following its decision to retain the titanium dioxide business, the company has no divestment projects currently under way, executives say.

The company can live with this high gearing ratio, says Öhman's Jaakkola, "but it is above their comfort limit. It just does not give them much headroom for maneuvering." He adds that if Kemira cannot sell its titanium dioxide business-its sodium percarbonate business is also for sale but is too small to significantly change its financial situation-the company might consider divesting its organic acids business.

The company could even think about splitting off its Tikkurila coatings operations by floating the business on the stock exchange. Tikkurila, Jaakkola says, is the single most valuable part of Kemira-a consumer business growing rapidly in Russia and Eastern Europe, with little synergy with the rest of Kemira's businesses. "But I have been predicting this would happen for several years now, and it hasn't happened yet," Jaakkola concedes.

Kerminen, the new CEO, is happy with the company Kurkilahti left him but isn't content to let it coast along as it might have in the past. "The reshaping of Kemira is an opportunity for us to improve," he says. "The restructuring is not really completed. We still have a lot of work to do."