Fantastic chemistry is never far away, especially when you're in the dentist's chair ON A FRIGID SUNDAY morning last month, Simon, my 13-year-old son, combined his fearlessness of physical challenges with that sort of teenage judgment that leaves adults wide-eyed and speechless. For the record, I love my son madly and believe he is on a trajectory to greatness, but that pathway surely will have its bumps. And the particular bump suffered over a holiday weekend deflected Simon into a dental adventure. What followed over the next several days was a mouth-opening, wallet-numbing reminder of chemistry's intimate presence in our lives.

Here's how it began. Instead of pulling off a way-cool sledding feat, Simon executed what X Games enthusiasts call a "face plant." With the indifferent help of a snow-hidden protrusion on the grounds of our rental getaway in western Maryland, Simon sheared off the top halves of his two bottom, front-and-center teeth. Though suddenly sporting a hockey-player smile, Simon seemed okay. There wasn't much pain or swelling and, remarkably, almost no blood. Given the holiday timing, we were two days away from our regular dentist, so we visited an emergency room doctor who prescribed an antibiotic regimen to prevent infection.

Two days later, when our family dentist, Dr. Vincent Greco, got a look at the pink dots in the cross sections of Simon's sheared teeth, he instantly knew how the plot would unfold. The dots meant the nerves had been exposed and were goners. The injury rendered the nerves nonfunctional, which is why Simon felt so little pain, Dr. Greco told Simon and me. He also told us that the nerve's job is essentially done once the tooth is grown, which Simon's teeth were. It was good news; it meant that the demise of these nerves did not entail loss of the teeth.

The bad news was that before Dr. Greco could restore the crowns of Simon's broken pearly whites, the nerve and pulp of the damaged teeth had to be extracted. Otherwise, this tissue could become infected, a result that surely would make us all curse the torturous turns that flesh can take. And so, not an hour after Dr. Greco had seen those pink dots, Simon was reclining in a chair of Dr. Julian Moiseiwitsch, a nearby endodontist who has done, by his own estimate, some 15,000 root canal treatments. I asked to be present during the procedure to lend support to Simon, who was holding up just fine, but also because I wanted to see the specialized tools, chemistries, and materials that Dr. Moiseiwitsch would summon to the cause.

As my son lay there silent and thoroughly numbed in the mouth, I was enthralled by the show. To extract the pulp, Dr. Moiseiwitsch used tiny files made of a superflexible nickel titanium alloy and shaped like archimedean screws. Such a file conforms even to severely curved nerve canals, and as it plunges toward the root's end, it shunts loosened pulp tissue upward and out of the tooth. The procedure also included squirts of sodium hypochlorite to dissolve tissue antiseptically, the chelating agent ethylenediaminetetraacetic acid (EDTA) to sop up, in Dr. Moiseiwitsch's phrasing, the "smear layer formed by mechanical debridement of the canals," and ethanol to dry the canal and prepare it for the second part of the root canal treatment—filling the new voids within Simon's teeth. 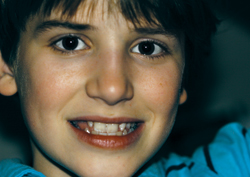 For that, Dr. Moiseiwitsch used a set of "points" shaped like tiny tapered conductor's batons. Their cores are zinc oxide, an antibacterial mineral, and the cores are wrapped with gutta percha, a natural latex rubber that 19th-century engineers used to insulate the first trans-atlantic communications cable. A sealer made of zinc oxide and eugenol, a clove oil component, ensured that everything was securely set in place and that the canals were free of voids. After the endodontist slathered a temporary layer of water-absorbent calcium hydroxide atop Simon's pulp-free, gutta-percha-filled tooth stumps, Simon was ready for the reconstructive phase back in Dr. Greco's office.

THAT WAS ANOTHER FEAST of materials. First, Dr. Greco sanded away the calcium hydroxide overlayer with an abrasive disk made, in part, of calcium carbonate derived from a cuttlefish's cuttlebone. Then, after some skillful preparation of the uppermost canal portion of the tooth stumps, including the use of a 37% phosphoric acid etchant, he inserted a composite cement, into which he anchored white pegs of carbon fiber (which has a coefficient of thermal expansion matching that of a tooth). With the posts in place, he then worked like a fine sculptor with a light-curable copolymer composite system based on bisphenol A diglycidylether methacrylate and a quartz filler component. From a handy capsule, he extruded beads of the composite's precursors along with a catalyst, and the mixture completely cured when exposed to a 500-nm beam of light for 40 seconds. At the end of the hour-long procedure, it was as though Simon had never planted his face.

Amazed as I was that highly trained and good-humored dental professionals could so deftly restore Simon's handsome smile by way of a wondrous menagerie of chemical and material innovations, I couldn't help but be reminded that the best dental materials were the ones Simon left behind on a small patch of snow in western Maryland.