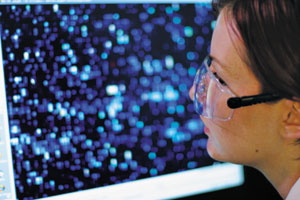 When describing their company, Almac Group managers like to employ the color-coded map of London's Underground as a visual aid. It is an apt metaphor for a firm with five drug development service lines that diverge, cross, and interconnect. The idea is that customers can access any or all of the lines in succession or in parallel in order to map a drug candidate's quickest route through clinical trials and market launch.

Like the Underground map, the Almac business scheme is also a little confusing at first glance. But upon study of its corporate map, an organizing principle can be discerned.

With the exception of Almac Diagnostics, which was recently spun off from Queen's University, Belfast, in Northern Ireland, the businesses were originally part of Galen Holdings. Galen was founded in 1968 in Craigavon, Northern Ireland, by Almac's current owner, Sir Allen McClay, to provide support services to the pharmaceutical industry.

McClay left Galen in 2001, shortly after the firm went public and took steps to acquire Warner Chilcott Pharmaceuticals. He then watched as Galen started to veer toward becoming a U.S.-focused pharmaceutical firm and away from the Northern Ireland-based services provider he had envisioned. At the age of 70, McClay began buying back the service components of Galen to form a new company. He launched Almac Group in 2003.

The Almac story over the past five years has been about putting together the pieces, some of which have operated since the 1960s.

"Five years ago, we had five divisions," says Rosaleen McGuckin, vice president for business development at Almac Sciences. Over the ensuing years, she explains, the spaces between them have closed in to leave a single organization serving pharmaceutical and biotechnology companies, primarily in clinical-stage drug development.

"We have a very strong integrated offering," she says. "If Almac Sciences can make the early supply of API or new chemical entity, Pharma Services can do the formulation and the drug product manufacturing for the investigational medicinal product. Almac Clinical Services can do packaging, labeling, and worldwide distribution of clinical trial supply. Almac Clinical Technologies can handle voice response or Web response for management of clinical trials."

Paul Harkin, president of Almac Diagnostics, agrees, noting that this seemingly straightforward alignment is only now emerging. "All the divisions have operated in their niches and have supported different parts of drug discovery," he says. "But we are now coalescing."

Many of Almac's customers are particularly in need of a broad raft of services, adds Jonathan Calderwood, marketing manager for Almac Clinical Services. "Virtual pharmaceutical companies and the biotech sector are coming to us for a development service package," he says, providing the impetus for Almac's divisions to work together. "These customers want a one-stop-shop type of approach to ease their clinical trials."

The company is also guided by the emerging field of personalized medicine. The practice puts the spotlight on the diagnostics division, given its focus on biomarker-based diagnostics and patient stratification strategies for clinical trials. For that strategy, subgroups of patients who are distinguishable by genetics and other biological traits are tracked independently in trials in an effort to determine who will be served best or least by new drug candidates. Through a partnership with Affymetrix, Almac Diagnostics has developed diagnostic screening arrays for colorectal, breast, and lung cancer, and it is developing similar tools for ovarian and prostate cancer.

Almac Sciences, formerly Chemical Synthesis Services, weathered the downturn in the fine chemicals market with a business focused on chiral molecule synthesis and high-potency APIs—materials that need to be manufactured in highly contained environments to maintain purity and safety. It has looked to partnerships such as the chiral chemistry consortium it formed in 2004 with Chiral Quest and the German enzymes specialist IEP.

Almac has also branched out into cytotoxic chemistry and peptides, spending approximately $1 million to scale up operations near Edinburgh, Scotland, and Craigavon. According to McGuckin, Almac uses solid-phase synthesis to manufacture pharmaceutical-grade peptides of up to 150 amino acids. "Growth has been excellent," she says. "And we fully expect to see that continue for a few years."

In fact, the group as a whole has been growing steadily, with sales up from $229 million in 2005 to $295 million last year. The firm is projecting 20% sales growth in 2008. Almac is financed entirely by McClay, who spent $456 million to buy the businesses and has invested another $300 million since 2003.

Currently, the company is putting $12 million into an analytical laboratory expansion in Craigavon for the Pharma Services division. "Pharma Services wants to support clinical material manufacture but also provide commercial support and packaging services," says Jim McGibbon, director of business development for the new unit. "The new analytical capability is vital to us for commercial work."

McGibbon promises that Pharma Services will go global through partnerships. "This is a work in progress," he says. "There is an increased need for us to have a global reach." Partnerships will also play a vital role for Almac Sciences, which arranges large-scale manufacturing in India and elsewhere through partnerships, according to McGuckin.

Although it's still rooted in Northern Ireland, Almac is extending its international presence with a $100 million U.S. headquarters, which is under construction in Lansdale, Pa., and due to open next year. The 240,000-sq-ft facility will create 400 jobs and consolidate Clinical Technologies and Clinical Services operations that are already up and running in Pennsylvania. Formulation, analytical services, and chemistry process development and manufacturing operations for Almac Sciences and Pharma Services will follow, according to Chief Executive Officer Alan Armstrong.

"Our vision has always been to be strong in the U.K., Europe, and the U.S.," Armstrong says. Almac wants to have a U.S. headquarters that reflects the integration of services seen in Craigavon. "API to formulation to clinical service to manufacturing to distribution: We want the U.S. site to evolve this way," he says.

According to James Bruno, president of the consulting firm Chemical & Pharmaceutical Solutions, Almac is succeeding in assembling a coherent set of services centered on drug development, clinical trials, and product launch. "They are presenting more of a single front when you talk to people there," he says. "You don't feel like you have to talk to five different people like you used to."

In the contract manufacturing market in particular, Bruno says, Almac Sciences has staked out a unique niche. "There are not a lot of companies out there that fit that niche—doing process development and commercial-scale high-potency and high-containment production, but not necessarily large-scale chemistry," he says.

The company's main vulnerability, Bruno says, will be advances from India and elsewhere in producing high-potency and high-containment APIs. Almac claims that it maintains a technical advantage over any low-cost competition.

As Almac's managers tie their five businesses together, Armstrong is looking ahead to the growth of personalized medicine and to serving the emerging companies that will offer it.

"We finally have a full complement of services at the foundation, and now we are in the process of pulling it together into one company," Armstrong adds. "As we move forward over the next few years, we may find that the Almac Sciences, Clinical Technology, and Clinical Services divisions all disappear into one Almac organization."

More on this topic