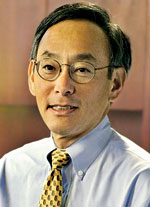 STEVEN CHU, President-Elect Barack Obama's choice for energy secretary, has a crystal clear stance on climate change: It's a big problem that needs to be addressed now. This sentiment, which he has expressed in interviews, speeches, and reports, has made him a popular pick to lead the Department of Energy.

His Senate confirmation is expected to come fast and easily. Sen. Jeff Bingaman (D-N.M.), chair of the Energy & Natural Resource Committee, has set Chu's confirmation hearing for Jan. 13. Pointing to Chu's DOE lab experience, Bingaman predicts "Chu will know how to maximize the labs' capability in their current core missions and tap into their expertise to tackle newer, critical missions—such as climate change and energy security."

Chu, 60, is director of the DOE Lawrence Berkeley National Laboratory (LBNL) and a Nobel Laureate in physics. He is inheriting a multifaceted operation at DOE and a $25 billion annual budget. About $5 billion is specifically directed to science, but research and development components are sprinkled throughout the department.

Observers see this respected lab director as someone who can make an impact on this large agency. They point to Chu's positions on climate change and his support for basic energy research.

In speeches and on the lab's website, Chu argues: "The ominous signs of climate change we see today are a warning of dire economic and social consequences for us all, but especially for the poor of the world. The path to finding solutions is to bring together the finest, most passionate minds to work on the problem in a coordinated effort and to give these researchers the resources commensurate with the challenge."

His views mesh with those of his new boss. Obama, after a Dec. 9 meeting with former vice president Al Gore, reiterated his campaign theme that the time for global-warming denial is long past. But for Obama, global warming is an "opportunity"—as well as a global problem and "a matter of urgency and national security."

"We have the opportunity now to create jobs all across this country," Obama said after the meeting, "and to repower America, to redesign how we use energy and think about how we are increasing efficiency to make our economy stronger, make us more safe, reduce our dependence on foreign oil, and make us competitive for decades to come—even as we save the planet."

The president-elect says he will commit some $150 billion over 10 years for clean energy projects and for green jobs. Chu also ties clean energy technologies to new green jobs, agreeing that there is a silver lining in global warming and alternative energy. This funding, which is likely to be part of the economic stimulus package, will greatly affect what Chu and DOE can achieve and how fast they can achieve it.

"Aggressive support of energy, science, and technology, coupled with incentives to accelerate development and deployment of innovative solutions," Chu has said, "can transform the entire landscape of energy demand and supply. What the world does in the coming decade will have enormous consequences that will last for centuries. It's imperative that we begin without further delay."

Collaborators
[+]Enlarge
Credit: Roy Kaltschmidt/LBNL
Chu credits collaboration with students for some of his most important research. 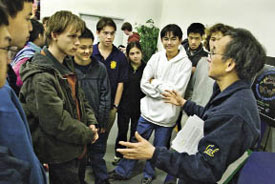 Credit: Roy Kaltschmidt/LBNL
Chu credits collaboration with students for some of his most important research.

THE VIEWS of Obama and Chu are a 180?? twist from those of the Bush Administration. For most of the past eight years, President George W. Bush questioned if global warming was real, and top Administration officials didn't???until recently???tie energy technologies to greenhouse gas emissions.

For example, Energy Secretary Samuel W. Bodman, a chemical engineer by training, has found himself frequently in the awkward position of backing growing funding for renewable energy, carbon capture and sequestration, nuclear energy, and other technologies that would limit carbon dioxide emission without explicitly emphasizing their connection to global warming.

Bodman applauded Chu's nomination, pointing particularly to his experience as the Berkeley lab director. Chu, Bodman said, "understands the significance of our energy and environmental challenges, and more importantly, understands the technical solutions necessary to address them."

Chu has also spoken on the need to increase government spending for basic energy research. "The great industrial research institutes, such as Bell Labs, are mere shadows of their former glory," he said at a September press conference. (Chu once worked at Bell Laboratories.) "Government support of research at universities and national labs is our only hope to supply the science required to create transformative energy solutions."

He has underscored the importance of "transformative technologies," which may not see commercialization for a decade or more. He says they are particularly needed in the energy area, where, he notes, a growing number of scientists are turning their attention to energy problems, pointing to several programs at his own LBNL.

For example, his lab has tightened its focus on energy and climate-change R&D by seeking to produce new fuels and electricity from renewable energy sources—in this case, growing nonfood plant materials for energy and making artificial photosynthesis practical.

In another effort, Chu was instrumental in bringing to the San Francisco Bay Area the Joint BioEnergy Institute, a scientific consortium led by his lab. The institute won a $135 million DOE grant to develop biofuels from renewable energy sources and is one of three department-funded bioenergy research centers announced in 2007.

He also played a major role in the creation of the Energy Biosciences Institute at the University of California, Berkeley, funded with a $500 million grant from the oil company BP. It too is a consortium—this time with UC Berkeley, the University of Illinois, and BP, as well as LBNL.

Chu's background as a Nobel Prize-winning lab scientist and an R&D lab director is a sharp departure from most past energy secretaries, who include lawyers, an ex-governor, an ambassador, a smattering of past Congress members, an admiral, an electric utility executive, and a mayor. Only a few brought energy and engineering experience to the Cabinet post.

With Chinese roots, Chu might bring a deeper understanding of the energy needs of the developing world. In 2007, he cochaired a study and report commissioned by the governments of China and Brazil to examine global energy development.

The report recommended immediate worldwide action on energy efficiency and a reduction of carbon emissions, development of technologies to capture and sequester carbon from coal-fired power plants, and accelerated deployment of renewable energy technologies. In interviews with reporters, Chu urged that a firm global price be set for CO2 emissions to encourage energy efficiency and a shift to energy sources that emit less carbon. He stressed the need to address coal, noting its importance to China, India, and the U.S. The developing world, he said, must deal with climate change.

AT THE TIME the report was released, when quizzed by C&EN over what role the developed world should play in aiding developing countries, Chu gave the example of China and noted that 300 million people, the equivalent of the U.S. population, will be born or move into Chinese cities over the next few decades.

"What the world does in the coming decade will have enormous consequences that will last for centuries."

This massive growth and movement, Chu said, presents an opportunity for China to "super-leapfrog" over the path of the U.S. and other developed countries, allowing it—and other fast-growing countries like India—to apply new technologies and more advanced sustainable approaches than those used in the West. Unlike the U.S. with its sprawling cities, old technologies, and established infrastructure, these countries have an opportunity to add efficient new technologies with less resistance. They have more choices.

"You build into these cities renewable energy sources, like solar and wind," he told reporters. "You recycle water; you design the buildings so you have very efficient power generation.

"I think China and India can easily see that this is in their best interest," Chu continued. "It is an incorporation of technologies that exist today and are cost-effective. There is a financial incentive too. The developed world can talk with them and help the design, and we can actually bring these applications back to the U.S. or to other parts of the developed world."

Chu's parents immigrated to the U.S. from China in the early 1940s. His father earned a chemical engineering degree from Massachusetts Institute of Technology and taught at various U.S. universities. His mother studied economics. Education, he said in his autobiography, was his family's "raison d'Être."

"Virtually all our aunts and uncles had Ph.D.s in science or engineering," he said, adding that his two brothers and four cousins hold between them three M.D.s, four Ph.D.s, and a law degree.

After what he called a "lackluster A??? average" in high school, he attended the University of Rochester and then went on to UC Berkeley, where he intended to become a theoretical physicist. The "Feynman Lectures on Physics" were a strong influence at the time, he noted.

At UC Berkeley, he began a slow shift to experimental physics. After earning a Ph.D., he became an assistant professor there in 1978. Chu jumped at the opportunity to join Bell Labs on a part-time basis in 1978 and eventually left UC Berkeley to do unfettered research at the institution, which he called, quoting Mary Poppins, "practically perfect in every way."

However, after nine years at Bell Labs, he returned to academia, joining the faculty at Stanford University, where he taught and also broadened his work to include polymer physics and biology.

Over the course of his research career, Chu and two other physicists developed methods of cooling and trapping atoms with laser light, for which they received a Nobel Prize in 1997.

In 2004, Chu returned to Berkeley, this time to lead LBNL. Chu's replacement will be selected by UC Berkeley, which manages the lab.

Sustainability
US Senate passes sustainable chemistry legislation
Environment
P2 and ADM pair up for renewable products
Recycling
Coca-Cola bottler invests in recycling
Share X
To send an e-mail to multiple recipients, separate e-mail addresses with a comma, semicolon, or both.
Title: Steven Chu To Lead Energy Department
Author: Jeff Johnson
Chemical & Engineering News will not share your email address with any other person or company.