U Of Michigan Buys Pfizer Site 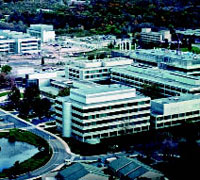 THE UNIVERSITY OF MICHIGAN has acquired Pfizer's Ann Arbor, Mich., research facility for approximately $108 million. The 174-acre site, with nearly 2 million sq ft of laboratory and administrative space in 30 buildings, will be used for a broad range of research activities and is expected to create at least 2,000 jobs over the next 10 years.

A comparable number of jobs were lost in Ann Arbor after Pfizer's decision two years ago to close the facility as part of a broad restructuring plan by the company. University President Mary Sue Coleman sees the acquisition as a revitalizing force for research in the region.

"These facilities will help attract more research funding to the area," Coleman says, "allowing us not only to broaden our contributions as one of the nation's premier research universities but also to strengthen the region's ability to stimulate new business."

The acquisition will be funded primarily from the University of Michigan Health System reserves, funds set aside from university-related health care operations for strategic investments. The university says it intends to provide opportunities for industrial partners.

Decades ago, the university sold the land that the research center is built on to Parke-Davis, which, through a series of acquisitions, eventually became part of Pfizer. Joseph Serwach, a spokesman for U of Michigan, says the original deal afforded the university first right of refusal for any subsequent sale of the property.

The economic downturn also played in the university's favor in buying the laboratories, according to Serwach. "We actually purchased it for less than $60 per sq ft," he says. "You can't buy a house for that, let alone high-quality labs with fume hoods."

U of Michigan is the fifth-largest research university in the U.S. It had nearly $876 million in research activity under way in 2008, including $342 million in grants to medical school researchers. According to Serwach, the university has established a hiring fund of $3 million and has already hired 13 former Pfizer researchers.

In 2007, Yale University made a similar investment in an abandoned pharmaceutical lab. It purchased a 550,000-sq-ft chemistry and R&D center from Bayer in West Haven, Conn., for a reported $109 million.