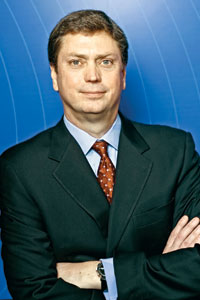 EVEN INSIDERS at Chemtura have to be wondering whether Craig A. Rogerson, who came on board in early December 2008 as chairman and chief executive officer, can extricate the firm from the mess it is in.

Last year, while he was the CEO of specialty chemical maker Hercules, Rogerson succeeded in tidying up and selling the firm to Ashland. But Chemtura will take more than tidying up. The company announced late last month that it could soon run out of cash to fund operations, even as it faces a mid-July deadline to pay a $374 million bond. Plant-capacity utilization in most businesses is less than 50%. Many factory workers are on furlough. The firm is also in the process of eliminating 500 jobs globally—about 20% of its administrative population.

The question is: Can Rogerson keep Chemtura out of bankruptcy?

In the midst of a credit crunch and economic slowdown, Chemtura reported respectable 2008 sales of $3.5 billion, down 5% from the year before. Worse, though, the firm reported a net loss of $1 billion in 2008, including unusual items such as a $986 million write-down in the value of assets. The firm recorded a net loss of $3 million in 2007.

Like most chemical firms, Chemtura's fourth quarter was dismal. Customers in the construction, electronics, and automotive sectors slashed their orders for plastic additives, flame retardants, and petroleum additives. Sales for the quarter dropped 23% to $690 million, compared with a year ago. The firm recorded a net loss of $737 million, including a $665 million asset impairment charge, compared with no profit or loss in the previous year.

The outlook for 2009 isn't much better. "I see 2009 as significantly weaker than 2008, both from an overall market perspective and from Chemtura's perspective," Rogerson says. At $60 million, the firm's capital spending plans this year are about half what they were in 2008. It is trying to keep R&D at roughly the same $51 million level as in 2008.

Rogerson, 52, a chemical engineer with a B.S. from Michigan State University, knows the difficulties he faces at Chemtura. Last month, the firm revealed it was trying to sell businesses to pay the $374 million note. And with the company's shares trading at about 37 cents, "I would say people are not betting that we're going to be able to get a sale done," Rogerson tells C&EN. "The stock is clearly not trading on the value of Chemtura's business," he adds. Shares traded as high as $8.81 within the past year.

"Maybe Rogerson was brought in too late," says Dmitry Silversteyn, a chemical stock analyst with Longbow Research. The effort to sell businesses to pay back the loan should have been undertaken a year and a half ago, he explains. But, he adds, "if anyone can get this done, Rogerson can."

Rogerson says he knows he has to arrange and then close an asset deal pretty quickly. He won't say what Chemtura hopes to sell, although Silversteyn suggests it will have to be one or more of the firm's more profitable businesses such as crop protection or pool chemicals. And Chemtura will have to get at least $500 million from asset sales if the firm is to clear $374 million after taxes, Silversteyn adds.

Chemtura At A Glance

NOTE: Figures and business structure are for 2008. a Includes unusual items

Chemtura wouldn't comment on market rumors that bidders for the firm's businesses include Sinopec, which is China's largest oil refiner and chemical maker, and China National Chemical, a state-owned firm. Rogerson needs to keep his cards close to his vest. "When buyers know that the proceeds are needed on a timetable like we've given, we lose some leverage," he admits.

As part of the bidding process, Rogerson says, Chemtura and its advisers have screened potential buyers "for their ability to close a deal. They have to have either the cash on hand or the financing lined up." Buyers, therefore, are more likely to be "major strategic buyers than private equity buyers, especially in this market," he notes.

If a deal doesn't come through, Rogerson says he has options, although he admits they aren't ideal. They include negotiating an extension or refinancing with bondholders; finding an outside investor; or, as a last resort, declaring bankruptcy. "Those are the options and probably in that order," he says. "With a near-term liquidity issue and a July 15 note maturity, we need to explore all options. And so we are doing that in parallel and not in sequence."

Refinancing will be difficult, if not impossible, notes John Roberts, a stock analyst at Buckingham Research. He cites the recently announced sale of Nova Chemicals to International Petroleum Investment Co., owned by the government of Abu Dhabi, United Arab Emirates (C&EN, March 2, page 13). Nova had been trolling the financial markets for cash to meet its own debt obligations. In the end, however, it saw no option other than to sell to cash-rich IPIC.

But Rogerson has been in tight situations before. In late 2002, he was running Hercules' BetzDearborn water treatment business when then-CEO William M. Joyce sold it to GE to stave off bankruptcy for Hercules. When Joyce left to head Nalco in 2003, Rogerson took over. He continued to cope with debt left over from the 1998 purchase of Betz and with asbestos and pension liabilities.

Hercules and Chemtura, however, aren't in identical straits. Just before the BetzDearborn sale, "Hercules was much more highly leveraged than Chemtura is now," Rogerson points out. "Hercules was in a much more difficult debt position. On the other hand, the banking markets then weren't in disarray like they are now, and near-term liquidity wasn't a major issue at Hercules."

However, just as was the case at Hercules, Rogerson believes Chemtura will avoid bankruptcy and continue on to another day. "My intent is to grow the company one way or another after getting over these relatively short-term issues," he says.

Chemtura put itself up for sale back in December 2007 but didn't find any takers. Rogerson says he didn't come to Chemtura only to spruce it up for sale at a later date. "Selling the company has not been my charge from the Chemtura board. If that was the charge, I wouldn't have come," he explains.

Rogerson says he is convinced that being frank with banks, bondholders, and shareholders will help Chemtura through the current cash squeeze. "We hadn't always been that way at Hercules," he recalls. But after the sale of BetzDearborn, "we made the effort to be very transparent, and that leads to credibility."

At Chemtura, "we are going to make commitments, and it will be important for our shareholders and Wall Street that we do what we say we are going to do," Rogerson notes. "We can't over-promise and under-deliver. There has been some history of that here," he adds, referring to the failure of former CEO Robert L. Wood to achieve pledged increases in earnings.

Rogerson says he hasn't been at Chemtura long enough—less than 90 days—to make any specific commitments. At Hercules, he vowed to deliver double-digit earnings per share growth and 15% operating cash flow growth—measures of profitability and liquidity. "We talked about consistently delivering results like that for five years and achieved them every year but one," he says.

"We can't over-promise and under-deliver. There has been some history of that here."

IT WILL BE important for Chemtura to have defined, well-understood metrics like those he used at Hercules, Rogerson says. "Your tactics can change, but you have to set a path and you have to stick to that path," he adds. But not just yet. "We are in thick smoke here. We can't even tell where we are," he says.

Rogerson says he is confident he can establish a direction and position Chemtura for growth once the smoke does clear. As it stands today, he admits, the firm is an amalgamation of disparate businesses drawn from once-separate entities such as Crompton & Knowles, Uniroyal Chemical, Witco, and Great Lakes Chemical. An internal reorganization that Rogerson outlined in January seeks to establish heads of discrete businesses who have overall responsibility for their operations. Some firms may refer to this organization as a strategic business unit structure.

Formerly, such responsibilities lay with the leaders of Chemtura's four divisions—performance specialties, polymer additives, consumer products, and crop protection—rather than the heads of individual businesses under them. The result, Rogerson says, was that some businesses didn't get the attention they needed. "If you are running the plastic additives division and the fire retardants business is your big money maker, the polyvinyl chloride (PVC) additives business can be an afterthought," he notes.

Within those new divisions each business "will have a general manager who is responsible for profit and loss and has the authority to make the right moves and turn the right knobs," Rogerson says. The new setup will put Chemtura in a better position to "make decisions on which businesses fit our long-range strategy and which ones don't," he adds.

Right now, Rogerson explains, "everything is tough, and you have to make all these difficult decisions. You have to do things you really don't want to do, but you know you have to do them out of necessity." If Chemtura survives the downturn and takes to heart the lessons it is learning, "we will be in a much stronger position. I think that is the opportunity here. You have to look at it that way," he says.