In a boost for tissue engineering, single-stranded DNA acts as a glue to allow two cell types that normally don't interact to adhere to each other

[+]Enlarge
Credit: Courtesy of Zev Gartner
DNA hybridization directs how cells connect to one another. In this image red-labeled cells surround green-labeled cells; blue-labeled DNA coats all the cells. 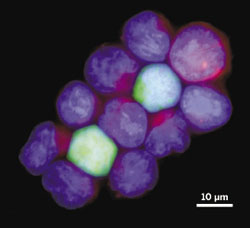 Credit: Courtesy of Zev Gartner
DNA hybridization directs how cells connect to one another. In this image red-labeled cells surround green-labeled cells; blue-labeled DNA coats all the cells.

The behavior of cells in multicellular organs is influenced by their three-dimensional environment, including cell-to-cell contacts. But controlling those contacts between cells remains a challenge when it comes to tissue engineering to make artificial tissues and organs. Carolyn R. Bertozzi of the University of California, Berkeley, and Zev J. Gartner, now of UC San Francisco, describe a method for using DNA to control the assembly of cells in 3-D microtissues (Proc. Natl. Acad. Sci. USA, DOI: 10.1073/pnas.0900717106). The researchers control the adhesive properties of the cells by coating different types of cells with complementary single-stranded DNA. If the DNA-coated cells are mixed at dilute ratios in the range of 1:50, the cells form individual clusters with a defined architecture. The researchers used the method to build 3-D structures with functioning cell-to-cell signaling networks. "This new method will allow specific adhesions between two cell types, even if they do not normally adhere to each other," comments David J. Odde of the University of Minnesota, Twin Cities. "This will allow greater flexibility in programming of 3-D cellular arrays."