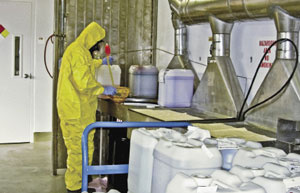 GONE ARE THE DAYS when one could run even the smallest of reactions and dump the waste down the sink without a second thought. Increasing awareness of the safety and environmental hazards of dumping waste, along with national and state hazardous waste legislation, now means that laboratory waste must generally be packaged, labeled, and picked up by environmental health and safety (EH&S) specialists. But what happens after that is often a mystery to the very people who generated the waste in the first place.

On college campuses, the waste generally gets transported to a central waste-handling location, where it is packed or combined for transport to a hazardous-waste incinerator. Before EH&S workers will touch it, however, they have to know what it is.

To lab workers, identifying the waste can seem like a burden. After all, there are plenty of questions that need to be answered: Does the label need a chemical name or common name? Do I really need to know everything that might be in the bottle and the exact concentrations? Is the waste flammable, corrosive, air or water reactive, toxic, an oxidizer, or explosive?

When it comes to handling hazardous waste, nailing down this information is the most critical step. Chemicals are handled, transported, and stored according to their waste category, and the safety of the people involved and the potential for environmental contamination depend on knowing exactly what is in the waste. "You can't put oxidizers and flammable liquids in the same container because that could be a bomb," says Scott Stroebel, manager of technical services for Heritage-WTI , a hazardous-waste contractor and incinerator operator in East Liverpool, Ohio.

Many schools are now working with Web-based waste-labeling and waste-pick-up-request forms with required fields to identify the waste components. "If the answers to the questions don't match, then we don't pick it up" until the discrepancies are worked out with the researcher, says Woody G. Wright, hazardous-waste manager for the University of Nevada, Reno.

"We do not do chemistry in waste containers."

In the case of a complete unknown that might have been sitting around in an unmarked container for a while, an EH&S specialist will assess the material on the spot, evaluating things such as its pH, flammability, oxidizing potential, and metal content to determine the waste category before disposal. It's a time-consuming and expensive process, and universities typically will do everything they can to identify the waste, including consulting with researchers who have left, rather than deal with something as an unknown, says Lawrence M. Gibbs, associate vice provost for EH&S at Stanford University.

AFTER WASTE is gathered from various sites on campus—Stanford EH&S workers pick up from about 800 unique locations, some on a weekly schedule and some by request—and brought to a central location, small containers of waste in the same category or class are packed together into "lab packs." These are Department of Transportation-approved shipping containers, typically drums or boxes of various sizes. The smaller waste containers are put into the drum or box along with a packing material such as vermiculite, which serves as a cushion and an absorbent in case of a leak. EH&S workers create a detailed chemical inventory of the drum contents, and whoever receives the waste—usually an incinerator operator—reviews the packing manifest before the drum is transported.

Campuses that generate large amounts of waste, especially organic solvents, may choose to "bulk" or combine the waste rather than package up smaller containers. Correct waste identification is critical for bulking, notes Craig Barney, Stanford's environmental programs manager, because whoever is doing the bulking wants the waste to be compatible, not a brew of components that react with each other. "We do not do chemistry in waste containers," Barney says emphatically. For health and safety reasons, bulking of organic solvents necessitates specialized equipment to pump waste from smaller containers into drums, as well as a ventilated area akin to a walk-in fume hood. Bulking saves Stanford about $8.00 per gal to dispose of the drum compared to a lab pack, Barney says.

Incinerating
[+]Enlarge
Credit: Heritage-WTI
A drum is poised to enter the kiln at Heritage-WTI. 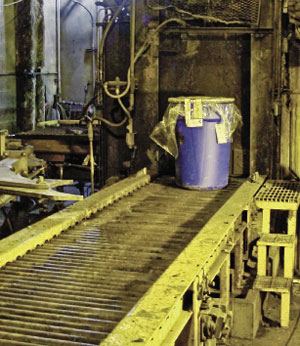 How much lab packing and bulking is done by university employees depends on the size of the campus. Large institutions such as Stanford and the University of California, Berkeley, generate enough waste that it's cost-effective to handle the waste and paperwork in-house. Smaller schools are more likely to hire a contractor. Even when contractors do the work, however, liability remains with whoever originates the waste. For that reason, "at Berkeley we like the control and assurance that all the i's are dotted and t's are crossed," says Patrick T. Goff, associate director for hazardous materials and radiation safety at UC Berkeley.

After drums are prepared and shipping manifests are approved, the waste is trucked to an incinerator site, unloaded, and stored until it can be burned. Incinerator operators closely manage which chemicals are fed into their kilns and when, for several reasons, Heritage-WTI's Stroebel says. One is to maintain the 980 ºC temperature of the kiln. Although a kiln is first fired up with natural gas and fuel oil, once it reaches that temperature, it is maintained by feeding it high-energy waste, such as solvents and flammable solids.

Other factors that play into how waste is fed into an incinerator include material compatibilities—oxidizers, for example, tend not to incinerate well with other materials, Stroebel says. Also, large amounts of aqueous waste require a lot of fuel to maintain the kiln temperature. Highly chlorinated waste creates a lot of ash, so Heritage-WTI burns such waste with other materials that might counteract ash production. And some materials, such as carbamates, which include pesticides and urethanes in their ranks, require extra analytical testing of the incinerator ash to ensure environmental compliance, so Heritage-WTI burns those together in batches to reduce the need for testing.

Annual waste disposal budgets can range from about $100,000 at a school such as UC Santa Cruz or UN Reno, which generate about 50,000 to 100,000 lb of research and academic waste per year, to $800,000 at Stanford, which handles about 340,000 lb/year (other sources of hazardous waste on campuses include utilities, construction, and hospitals). Schools take two approaches to paying for waste disposal: One camp favors having a single pool of money without direct charges to labs that generate waste, on the supposition that the approach will encourage researchers to work with EH&S departments to dispose of waste properly. The other camp favors a charge-back approach, with individual research labs billed directly for the waste they generate. The benefit here is that labs are likely to try harder to reduce the amount of waste they generate if they have to pay the bill for disposal.

OTHER EFFORTS to reduce laboratory waste include developing good chemical inventory programs so that labs don't order chemicals they already have in stock. In some cases researchers can even check to see if another lab has a material for a trial run before ordering a separate supply. Stanford and UC Berkeley also have chemical exchange programs, in which unused, unwanted chemicals are collected, stored, and made available for free to others on campus.

Stanford takes things one step further and recycles some chemical waste. At the moment, the program is limited to distilling methanol waste from dye lasers in chemistry professor Richard N. Zare's lab. After distillation, the purified methanol is then reused by Zare's lab, as well as by labs in the medical school for staining gels. Stanford's EH&S department is currently trying to work out a distillation protocol to expand the program to acetonitrile, of which there is currently a worldwide shortage (C&EN, Nov. 24, 2008, page 27).

Overall, academic EH&S waste managers say it's easier working with people now than it was a decade or two ago. "People are very positive about doing the right thing for the environment," says Kevin Kinast, Stanford's chemical waste program supervisor. EH&S staff all emphasize the need for good communication with laboratory researchers and the need for researchers to be up-front and as clear as possible about the waste they generate. "We can deal with anything, as long as we know what it is," Kinast says.

Sustainability
Can laboratories move away from single-use plastic?
Lab Safety
How to instill a robust safety ethic
Awards
Lab Safety At The University Of California
Share X
To send an e-mail to multiple recipients, separate e-mail addresses with a comma, semicolon, or both.
Title: Where Lab Waste Goes
Author: Jyllian N. Kemsley
Chemical & Engineering News will not share your email address with any other person or company.