NEW DATABASE
[+]Enlarge
The entry for creatine in Chemical Abstracts Service's new Common Chemistry database includes the compound's CAS Registry Number, its formula and chemical structure, synonyms for its chemical name, and a link to further data on Wikipedia. 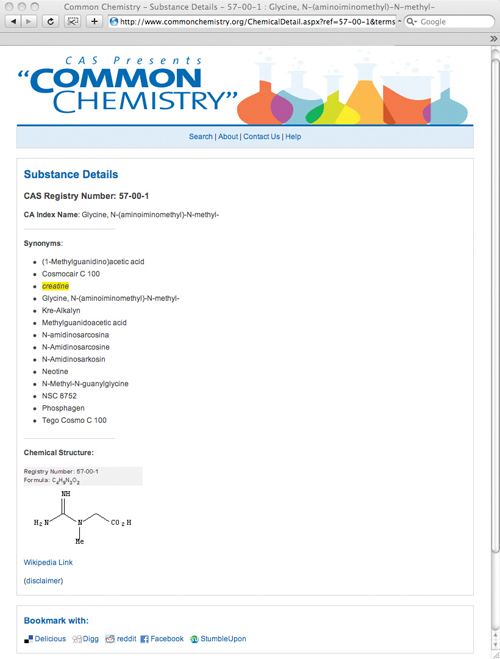 The entry for creatine in Chemical Abstracts Service's new Common Chemistry database includes the compound's CAS Registry Number, its formula and chemical structure, synonyms for its chemical name, and a link to further data on Wikipedia.

Chemical Abstracts Service (CAS), a division of the American Chemical Society, last week officially launched Common Chemistry, a free online database containing information on 7,800 chemicals of widespread and general interest as well as all 118 elements from the periodic table. CAS had previously introduced a test version of the site during the ACS national meeting in March.

Common Chemistry is primarily intended for the general public, including students, teachers, and the media, says Christine McCue, CAS vice president for marketing. Apart from some of the elements, the substances in Common Chemistry were selected because they had been cited 1,000 or more times in CAS databases. Common Chemistry compounds include, to take a few examples, creatine, a controversial muscle-building supplement; bisphenol A, an endocrine-disrupting monomer used for making food and beverage containers; benzoyl peroxide, an acne treatment; and resveratrol, a constituent of grapes and wine that is reputed to have beneficial health effects.

The Common Chemistry web site is the result of a collaboration between Wikipedia and CAS that began in 2008, after representatives of the online encyclopedia asked CAS for assistance in validating CAS Registry Numbers listed on Wikipedia's Chemistry Portal, McCue notes. "This collaboration is CAS' gesture to provide accurate chemical information and CAS Registry Numbers to the public, which is also in line with CAS' mission as a division of the American Chemical Society," she says.