Angst Over Cap And Trade

BASIC CHEMICALS
[+]Enlarge
Credit: Shutterstock
Energy-intensive industries in global competition may get breathing space in the first years of a proposed climate-change bill. 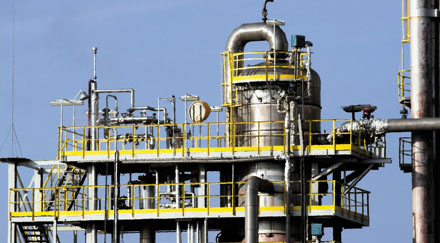 Credit: Shutterstock
Energy-intensive industries in global competition may get breathing space in the first years of a proposed climate-change bill.

Climate-change legislation that cleared the House Energy & Commerce Committee last month contains a key provision intended to help chemical companies and other energy-intensive industries that are operating in a globally competitive environment. The provision is likely to allow these industries to emit greenhouse gases without penalty during the first years the bill would go into effect.

The chemical industry is unsatisfied with the bill's new provision, however, and is gearing up to try to get a better deal as climate-change legislation wends its way through Congress in the months ahead, according to officials with the American Chemistry Council (ACC), the industry's trade association. Other observers say the assistance is generous, maybe too generous, and the provision is likely to be the best deal industry can expect.

The complex, 950-page bill establishes a cap-and-trade system that slowly reduces the amount of carbon dioxide a company can emit under a schedule spelled out in the bill. A company must buy permits or "allowances" for every ton of CO2 it emits. The cap declines each year, putting more pressure on companies to cut their emissions.

The bill provides several incentives to cut emissions. Obviously, the less pollution a company generates, the smaller the number of allowances it must buy. And if companies improve their performance and emit less than the cap, they can sell or "trade" these unneeded allowances to other companies for a negotiated price. The profits from beating the cap are intended to motivate companies to continue making and exceeding pollution reduction targets.

However, in the bill's latest version, its sponsors, Reps. Henry A. Waxman (D-Calif.) and Edward J. Markey (D-Mass.), provided free allowances sufficient to meet some 85% of CO2 emissions requirements during the first 10 years or so after the bill goes into effect. About 15% of these allowances are earmarked for high-energy industries that are in tight global competition, such as the chemical industry.

But this provision was modified three times in the last week of negotiations, says Owen Kean, ACC's director of energy policy, who calls the bill "the most complicated piece of legislation I have ever seen."

The final change was not what ACC wanted, and Kean estimates it cost energy-intensive industries up to $5 billion in free allowances they thought they would receive during the decades before the provision phases out. But House staff and several economists think these industries and chemical companies did pretty well and as a result are likely to have to do little during the early years to comply with climate-change legislation, which, if signed into law, would take effect in 2014.

Win or lose, chemical companies will be but one of many interests lining up with power companies, energy providers, energy consumers, and a host of other affected businesses and interest groups to lobby hard to get what they want in upcoming battles to pass a climate-change law.

Written by Reps. Jay Inslee (D-Wash.) and Michael F. Doyle (D-Pa.), the industrial provision gives these industries a cushion in what they will pay to continue emitting greenhouse gases in the first years of the law while they try to meet declining carbon dioxide caps. The provision's goal is to encourage these companies to stay in the U.S. rather than move offshore to countries without carbon dioxide constraints, taking jobs, profits, and emissions with them.

The Doyle-Inslee provision allocates the 15% free allowances to some 40 basic industry sectors, such as steel, paper, and chemicals, which make and sell primary materials to global markets. About 10 of the sectors are in basic chemical production, a House staff member explains to C&EN. The aim, the staffer continues, is that in 2014, companies in these sectors will not have to buy any allowances.

[+]Enlarge
Credit: 2 emissions but it still accounted for one-fifth of CO2 emissions in 2007

Credit: 2 emissions but it still accounted for one-fifth of CO2 emissions in 2007

In the first version of the provision, these industries would have received only enough free allowances to cover 85% of their projected emissions, the House aide says, but ACC and other companies successfully persuaded Doyle to raise the level to 100% of all of the industries' emissions, Kean notes. The 15% level of free allowances going to the basic industry sector would remain until 2025, with the total number of allowances declining along with the cap, and in 2025, the President would decide whether the freebies are still needed.

However, another last-minute change in the bill, added just before it cleared the committee, did not go so well for ACC. The amendment slightly increased the rate by which the reduction in the basic industry sector's free allowances tapers off. The effect was to cut the free allowances from 15% to 11.3% by 2025.

The change seems small, but it is worth billions of dollars to the affected industries, Kean notes.

In practice, however, 15% of the free allowances in the first years may prove to be more than the industries need, but having these allowances might help all U.S. companies.

These basic industries produce materials that are key to many downstream manufacturing processes, notes Robert Heilmayr, an energy analyst with World Resources Institute. Hence, the free allowances would benefit the entirety of U.S. manufacturing because they would result in lower costs for all basic raw materials, he adds.

Dallas Burtraw, a senior fellow with the economic think tank Resources for the Future, says the provision is "way too generous" and unlikely to encourage CO2 reductions. "Foreign competition has to be addressed for these industries," Burtraw continues, "but 10 or 11% of free allowances would have been enough."

Heilmayr and Burtraw say providing free allowances worth 100% of emissions obscures incentives for companies to cut CO2 emissions and become more efficient and productive. In fact, if a company has been particularly efficient, Heilmayr notes, it could be allocated more free allowances than it needs and quickly wind up with excess allowances to sell.

On the other hand, Heilmayr acknowledges that if the goal is to protect jobs, the generous allowances may have been necessary to sell the bill to Congress in a "politically contentious debate."

Exactly how these allowances will be divided up would be left to the Environmental Protection Agency to determine, according to the bill. As the provision goes into effect in 2014, EPA will both consider company requests to be included in the program and calculate what the level of free allowances should be. Burtraw and Heilmayr think that between 11 and 13% of free allowances would be sufficient to meet the needs of the sector.

But Kean predicts that the competition will be great. "When EPA opens the door for comments on who should qualify for free allowances, it is going to look like the shopping day after Thanksgiving. Everybody is going to try to break in," he says.

"We don't expect to have more allowances than we need," Kean continues, "but we don't want to be prematurely cut short either and have to eat the difference. We'd rather err on the side of too many allowances."

Kean notes that the issue concerns more than direct pollution allowances and points out that electricity prices are also likely to rise as generators buy CO2 allowances or institute new measures to lower their emissions. In addition, natural gas producers are likely to raise their prices, affecting chemical companies that depend on this gas for fuel and feedstock.

The economists note, however, that local electric distribution companies would get 30% of the free allowances, and natural gas distribution companies would receive 9% of the free allowances. Both are expected to sell these allowances and are required to use the revenues to cut what they charge consumers for energy. Although this aid could help consumers such as chemical companies, Burtraw and Heilmayr worry that without consumers seeing an increase in electricity and natural gas prices, they will have little incentive to consume less energy and increase efficiency. If energy demand stays high, it might have the effect of making it harder to reach the overall decline in greenhouse gases spelled out in the bill.

Kean counters, however, that efficiency and production improvements are already taking place in the chemical sector. He notes that the industry has reduced its CO2 emissions by 16% since 1990 while increasing production. And he adds that some chemical companies don't buy electricity or natural gas through distribution companies and may not profit from the free allowances.

The congressional debate is far from locked up. In the House, staff tell C&EN, some members are reexamining the impact of the last-minute industrial provision changes.

"Industry's basic argument has been that we grossly underestimated how much they are going to need," the House aide points out. "They say their problems are unique. My argument to them is this is the best deal the industry has seen in any climate bill, but we are in the second inning in a nine-inning, seventh game of the World Series. Now, these guys can go out and play in the House Ways & Means Committee when it gets the bill and in the Senate later on. If they can get a better deal, go to it."