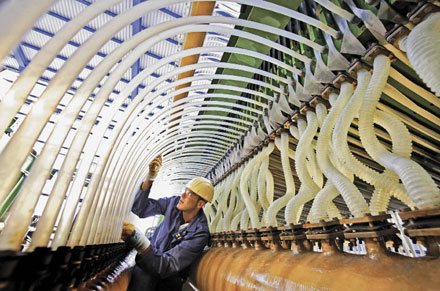 For the chemical industry, 2008 played out like a Shakespearean tragedy. Most of the year was fine—profitable, in fact. Then, “the slings and arrows of outrageous fortune” ensured things would end badly, leaving many industry players, like poor Hamlet, contemplating their very existence.

C&EN’s ranking of the global Top 50 chemical companies is based on full-year 2008 results from the world’s largest chemical makers. The numbers encompass a relatively strong first three quarters of the year—and then a fourth quarter that was among the worst the industry has ever experienced.

Some results were positive. For instance, sales for the 50 companies rose 9.6% to $892 billion. But the year also saw oil prices spike to historically high levels of nearly $150 per barrel, which forced companies to raise chemical prices just to stay afloat.

Sales also jumped at fertilizer companies, which had a banner year in 2008. Four fertilizer makers—Yara, PotashCorp of Saskatchewan, Mosaic, and Israel Chemicals—saw sales increase by more than 50%. The latter three companies didn’t even appear in C&EN’s ranking last year.

Corporate profits show the advent of the economic downturn more clearly, declining by nearly 27% to $60 billion. And for the 47 companies providing comparable year-over-year information, the average profit margin—chemical operating profits divided by sales—was 7.5%, a sharp decline from the 10.3% recorded in last year’s survey. In fact, the last time profits were lower was in 2003, when the industry posted a 5.5% margin while climbing out of the last cyclical trough.

In the fourth quarter, chemical companies and their customers throttled back on manufacturing and instead sold from inventory, according to Gregg Goodnight of Pearland, Texas-based consulting firm Chem­Analysis. “As it became obvious that 2009 demand was going to be down, people started drawing down inventories immensely all the way through the chain,” Goodnight says, “and November and December crashed.”

BASF Chairman Jürgen Hambrecht admitted as much in his annual letter to shareholders. The year 2008 “brought dramatic change to the world economy and to BASF: a global financial crisis, massive downturns in economies around the world, and enormous fluctuations in raw materials prices. After a very good start to 2008, consumer demand declined drastically, particularly in the fourth quarter,” he wrote.

With its $70.5 billion in chemical sales, BASF topped the ranking for the sixth year in a row. Its sales were up less than 1% from the previous survey, and its profits declined about 40% to $3.9 billion. And most of the profits BASF did earn came not from chemicals but from its Wintershall oil and gas exploration business.

Dow Chemical is once again the second-largest chemical company in the world, with almost $58 billion in sales, a 7.5% increase. Its profits, however, tumbled a precipitous 44.1% to $2.2 billion.

BASF and Dow will probably head the list again next year because they both completed large acquisitions in April. BASF purchased the specialty chemical maker Ciba, which, with 2008 sales of $5.5 billion, wasn’t quite large enough to make the Top 50 ranking. Dow bought Rohm and Haas, ranked number 42 globally with $8.4 billion in sales.

The largest mover at the top of the ranking was LyondellBasell. Last year, C&EN had separate entries for Lyondell and Basell. With a full year of results under its belt, the combined firm ranked fourth on the list. Basell would have been number 12, on the basis of 2007 sales.

C&EN has restated last year’s rankings because of changes in methodology. The biggest impact is on number 11, Royal Dutch/Shell, which appeared as the third-largest chemical company last year. This year, C&EN is not including some nonchemical revenues at Shell that it counted in previous years.

One trend evident in this year’s Top 50 ranking is the rise of the Middle East. In addition to SABIC’s 17.8% sales growth, National Petrochemical Co. (NPC) of Iran debuts on the list at number 45 with $7.8 billion in sales.

NPC is one of many Middle Eastern firms in the midst of massive expansions of petrochemical capacity. Five ethylene cracker projects are starting up this year in the Middle East alone, Goodnight says. Projects are coming onstream in Asia as well. Even if economies begin to recover later this year, Goodnight says, commodity chemicals will still suffer from overcapacity. “I think the worst is yet to come because of the supply shock,” he says. “You’ll have trough conditions in commodities in 2010 and 2011.”

The supply overhang might explain the low price that the International Petroleum Investment Co. (IPIC) of Abu Dhabi, United Arab Emirates, paid earlier this year for Nova Chemicals, Goodnight says. The $2.3 billion purchase was such a bargain given the strategic value of Nova’s petrochemical complex in Alberta, he explains, that he half expected a higher bid to come in before the deal closed. One never did, and that’s understandable, he says, given the poor outlook for petrochemicals in the coming years. “If you look at the next two years, it may be some fairly rough conditions for the industry,” he adds.

IPIC’s takeover of Nova is the only major chemical deal announced since last summer. Prior to 2008, deal-making had become increasingly ambitious. Ineos purchased BP’s Innovene olefins and derivatives business in late 2005 for $9 billion. Linde bought industrial gas firm BOC in 2006 for $15.5 billion. And Basell got Lyondell in 2007 in a deal valued at $20 billion. That same year, private equity firms and the Omani government allegedly considered a $50 billion takeover of Dow.

The go-go days of chemical megadeals seem to be over. LyondellBasell has filed for bankruptcy in the U.S., in part because of its large debt load. Ineos recently hammered out a plan with its banks to stay intact after servicing its debt proved a problem.

Hexion Specialty Chemicals, backed by the private equity firm Apollo Management, tried to purchase Huntsman Corp. for $10.6 billion in 2007, but the deal fell apart last year after Hexion and its banks got cold feet. Dow’s plans to sell half of its commodity chemicals business to Petrochemical Industries Co. of Kuwait fell through. Dow’s purchase of Rohm and Haas, announced after Hexion sued to get out of the Huntsman deal, was also headed for a courtroom before the parties came to terms.

Alasdair Nisbet, global head of chemicals at the investment bank Lazard, has seen a combination of tragic flaw and bad luck, particularly for the private equity firms that have driven a lot of deals in recent years. “The private equity funds for much of the past 10 years have been enormously successful with investments in the chemical industry,” he says, but that changed in 2008. “They have all learned that investing at the top of the cycle in chemicals has meant that they have had a very rough two years. The level of leverage we reached in these last two years was unsustainable in a cyclical business when you get to the bottom of the cycle,” he adds.

The recession has been worse than anybody could have planned for, Nisbet points out. “The severity of the downturn was unprecedented in anybody’s recollection of the chemical industry,” he says. “Companies have been quite shocked. I don’t think that anybody suspected that there would be a volume decline on the order of 30%.”

The chemical industry is back to the beginning of its merger and acquisition cycle, Nisbet observes. The deals occurring now are small transactions in which the seller is looking to get rid of a troublesome business that might be better off in another company’s hands. Then, “we will gradually start seeing some mergers, but we will not see the return of megadeals for around three to five years,” he says. Credit is starting to become available for deal-making, Nisbet adds, but banks are still willing to lend an amount that is only two to three times the before-tax earnings of a target company.

If Nisbet and other observers are right, it might be a while before there are transactions big enough to have much impact on future C&EN global Top 50 rankings.