Mining The Sea Of Plastic 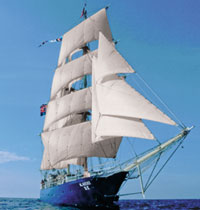 Earlier this month, two ships sailed from California to study a large patch of the Pacific Ocean, known as the “plastic vortex,” where maritime currents are causing plastic litter to congregate. Scientists aboard will try to determine how much plastic is in the vortex and its impact on marine life. They will also consider whether it can be economically recovered.

One of the ships is a sailboat named Kaisei; it has a crew of seven people. Kaisei belongs to the Ocean Voyages Institute, a nongovernmental organization that is backing Project Kaisei, another California-based NGO dedicated to studying the plastic vortex and cleaning it up. The other ship, the New Horizon , belongs to Scripps Institution of Oceanography and has a crew of 17. Its trip is sponsored by the University of California’s Ship Funds and Project Kaisei.

“Two boats will mean twice the data,” says Doug Woodring, a Hong Kong-based entrepreneur and water-sport enthusiast who is a cofounder of Project Kaisei. His group and Scripps independently developed plans to study the vortex and later decided to team up.

Despite being about the size of France, the plastic garbage patch isn’t well understood. Located northwest of Hawaii, the gyre is not crossed by shipping routes. Cruise ships don’t go there, and sailors avoid it because it’s not windy, Woodring says.

One of the main financial backers of Project Kaisei is the Bureau of International Recycling, a Brussels-based trade group. It’s unacceptable that so much waste material is just floating in the ocean, Francis Veys, director general of BIR, tells C&EN. “The materials have to go back in the recycling cycle,” he says. BIR managers decided to support Project Kaisei as soon as they heard of it, he recalls. “There’s a need for materials worldwide, and these debris are wasted,” he points out.

One of Project Kaisei’s missions is to study the concentration of the plastic in the vortex, the condition it’s in, and possible methods for recovering it. Much of the plastic has been floating for decades and has degraded into small pieces. Under these conditions, Veys says, it’s unlikely that the plastic can be sorted and recycled. “I’m not a scientist, but I think it’s more promising to recover it for energy,” he says.

A major motivation to remove the plastic from the ocean is that it’s likely to become coated with pesticides over years at sea, says Edward Kosior, a technical adviser to Project Kaisei and the founder of Nextek, a company that develops waste recovery technology. Plastics and most pesticides attract each other because they are hydrophobic, he explains. The pesticide enters the human food chain when fish eat bits of plastics, and humans in turn eat the fish.

If the plastic can be collected in an economical manner, Kosior reasons, it can be transformed into diesel through pyrolysis, likely in an oceangoing plastic-to-diesel plant. Unused fishing boats could trawl the vortex for plastics to feed to the mother ship, he envisions. Facilities that transform plastic into diesel exist on land, he notes, but having one at sea would be a first.

It’s more economical to burn the plastic for energy than transform it into diesel, counters Ian Boustead, head of U.K.-based Boustead Consulting, who has studied product life cycles for three decades. “It takes too much energy to turn it back into fuel,” he insists. And under any set of circumstances, it will be hard to economically recover plastic from the ocean. “Even if you take land-based postconsumer-waste plastic, it’s marginally economical to recover that,” he says.

Project Kaisei’s Woodring does not minimize the many challenges in cleaning up the vortex, but he remains optimistic that they will be overcome. “Very few people know of this problem; that means that not many great minds have had a chance to find solutions,” he says. The main problem he foresees will be to extract the plastic from the ocean. But, he says, “we made the problem, we should be able to solve it.”

If the scientific missions now under way demonstrate that the plastic vortex is a serious environmental problem, it’s possible that international agencies will subsidize a cleanup, BIR’s Veys figures. But echoing Woodring, he points out that at this stage a bigger issue is the low public awareness of the vortex.

It’s so low, Veys says, that the chemical industry, which produces the bulk resins used to make the products now floating in the ocean, has not had a chance to get involved. “The petrochemical industry is a strong industry, so it will react,” Veys predicts. “Once it’s aware, it will be more active in designing solutions for recovery, prevention, and recycling.”