EQUAL ACCESS
[+]Enlarge
Credit: World Vision
From providing education to treating disease, scientists have a role in protecting human rights around the world. Shown here are children at a refugee camp in the Democratic Republic of Congo. 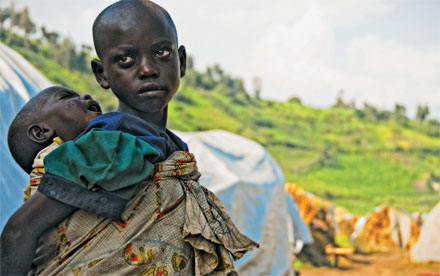 Credit: World Vision
From providing education to treating disease, scientists have a role in protecting human rights around the world. Shown here are children at a refugee camp in the Democratic Republic of Congo.

Scientific organizations have a common goal of improving people’s lives. Yet only a few have organized efforts in the form of committees, sections, or working groups dedicated to promoting and protecting human rights.

“We have a lot of work to do in getting more scientific organizations to become engaged in human rights,” says Mona Younis, former director of the Science & Human Rights Program at the American Association for the Advancement of Science (AAAS). “For so long, people have imagined that human rights work is for lawyers and legal experts. The notion that scientists are vital for human rights efforts is relatively new.”

The role scientists play in human rights can be powerful. For example, through actions like letter-writing campaigns, scientists can aid colleagues who have been imprisoned, tortured, exiled, silenced, or barred from travel because of their research. Scientists can also point out research-based solutions to problems such as water shortages.

Coalition members at the meeting expressed a variety of reasons for participating. For Lee Herring, director of public affairs and public information for the American Sociological Association, a member organization, it is a strong sense of responsibility. “Science is getting to the point where it can’t in good conscience sit by while things are going on that science has the capability of addressing in ways to ameliorate the situation,” he said. “If you have all these highly capable technologies, it seems almost immoral to not apply them or use them in ways that would assist the goals and objectives of human rights.”

Chemist Jeffrey H. Toney, representing coalition member Sigma Xi, said he was gathering information on human rights to bring back to his organization, which he said is doing work related to human rights but has no formal programs in it. “The goal is to get more Sigma Xi members involved in the initiatives,” he said.

The American Chemical Society, through its Committee on International Activities, also participated in the July meeting as an observer, said Bradley D. Miller, director of the ACS Office of International Activities and cochair of the coalition’s Welfare of Scientists working group. The ACS committee is monitoring the coalition’s progress and will decide whether to recommend that ACS join as a full member, he noted.

During a session titled “Human Rights 101 for Scientists,” Margaret Huang, executive director of the human rights organization Rights Working Group, provided an overview of human rights and where it intersects with science. “Human rights are the basic protections and entitlement needed to safeguard every person’s dignity and promote the realization of each person’s full potential,” she said. And scientific organizations can help hold governments accountable for respecting, protecting, and fulfilling human rights laws, she added. For example, scientists can work with governments to make science education accessible to all children and adults without discrimination.

In other sessions, representatives from several organizations described their past work in protecting human rights. For example, Miller talked about international scientific mobility and ACS’s efforts to improve visa application processing for foreign scientists coming to the U.S. And Eric Rosenthal, founder of Mental Disability Rights International, detailed the abuse of electroshock treatment without anesthesia on patients in Turkish psychiatric hospitals. The practice, which causes excruciating pain and long-term damage, was being used out of convenience rather than proven effectiveness. Rosenthal urged the scientific community to not sit by and let bad science like this continue to happen. 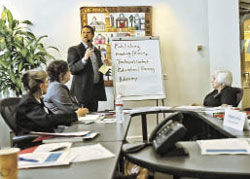 Credit: Linda Wang/CE&N
Miller leads a discussion during a working group meeting of the coalition.

In addition to finding out how Sigma Xi can become more involved in human rights issues, Toney was also interested in learning new ways to incorporate human rights into the undergraduate courses at Kean University, in Union, N.J., where he is dean of the College of Natural, Applied & Health Sciences.

“I’m always looking for new ways to connect with the students,” he said. “When you think about human rights, whether it’s droughts or water-safety issues, this is something many of our students can relate to. It really instills motivation in them if they see they’re making a real contribution to benefiting humanity.”

The meeting also provided an opportunity for human rights groups to learn how scientific societies could further their cause. Maureen Lynch, senior advocate for statelessness initiatives at the nonprofit organization Refugees International, says she came to the meeting hoping to see what science and scientists have to offer organizations like hers.

“I have ideas on projects that could really use the support of the scientific community, but the range of ideas is very limited because I really don’t know what kind of expertise is available,” Lynch said. “If I can become better acquainted with professionals who are working in the scientific community, perhaps I can more fully I appreciate what they can bring to the table.”

Lynch said she was disappointed to see that there wasn’t more representation at the meeting by human rights groups. Of the 112 registered participants, Lynch was among a handful representing human rights organizations. “I had hoped that there would be a little more movement in advancing the dialogue,” she said. “A great deal more effort has to be put into bringing the two communities together.”

But according to Jessica Wyndham, acting coordinator of the coalition and project director of the AAAS Science & Human Rights Program, the coalition needs to first mobilize the scientific community. “If we bring the human rights community on board immediately, then we lose what’s unique about the group, and we lose the opportunity to engage scientists, many of whom are still skeptical about human rights and unsure about what they can do to contribute,” Wyndham said. The coalition will be reaching out to human rights organizations through its working groups, she added.

But when dealing with human rights issues, there’s no time to waste, Lynch stressed. “People are dying every day from human rights violations, and if there’s something the science community can do right now to help, let’s find those places where the overlap exists and start working on those things now.”

Like Lynch, Zafra Lerman is not convinced that the coalition can move swiftly enough on human rights issues. Lerman chairs the Subcommittee on Scientific Freedom & Human Rights for the ACS Committee on International Activities and has been fighting for the rights of chemical scientists around the world since 1987. She noted that AAAS used to have an effective system of alerting scientific organizations to human rights cases involving scientists. The AAAS Human Rights Action Network, which began in 1993, provided details of a given case, along with the relevant human rights standards that were being violated; recommended actions; and supplied addresses of government officials to whom letters of protest should be sent.

For example, an alert dated May 24, 2004, described the case of five Bulgarian nurses and a Palestinian doctor working at a hospital in Benghazi, Libya. A Libyan court had sentenced the health care professionals to death by firing squad for deliberately infecting 400 children with HIV despite the lack of scientific evidence linking the health workers to the infections. After a lengthy letter-writing campaign by ACS and other scientific organizations, Libya released the group in 2007.

Letter-writing, particularly by large organizations such as ACS, continues to be a powerful tool to protest against human rights violations. “When we write a letter, it’s not just a letter,” Miller said. “When the ACS president is putting his or her signature to that, they’re adding the weight of more than 154,000 people to it. We’ve had cases where our voice being added to this larger discourse has resulted in the freedom of a scientist, and if not their freedom then certainly better treatment while they’re in prison.”

Take the high-profile case of Russian environmentalist Aleksandr Nikitin, who was imprisoned in 1996 and charged with treason for contributing to a report that exposed Russia’s illegal dumping of nuclear waste. With the support of ACS in the form of letters and other diplomacy, Nikitin was freed in 2000.

Notwithstanding the action network’s usefulness to scientific organizations like ACS, AAAS terminated the service in 2006.

“AAAS for many, many years was the leader in the fight for human rights,” said Lerman, who heads the Institute for Science Education & Science Communication at Columbia College Chicago. “I would like AAAS again to take the leadership role, to have an office that informs all the societies of all the cases and suggests action. Every minute that you don’t take action to help somebody in trouble, this person is ­suffering.”

But it’s not just societies that make a difference in human rights cases—individual scientists can also play a role in promoting human rights.

“I think the first step that any scientist can take is to become familiar with some of the human rights issues of today,” Lynch said. “Start reading background material on the issues. As you’re reading those materials, read it through the filter of your knowledge base and how you might solve the problems. Look for ways that your skills can be brought to the table to help.” Then, she said, take action.