An Eye On Cancer, A Smiling Death 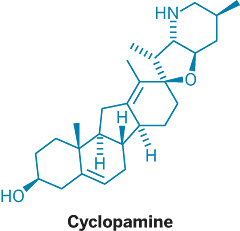 For pioneering sheep ranchers in central Idaho, it must have seemed like a curse. Pregnant sheep in their herds sometimes would birth lambs with a single eye in the middle of their foreheads. Just after World War II, at the behest of distressed sheepherders who were losing up to 40% of their flocks to the cyclopean defect, researchers at the U.S. Department of Agriculture's Poisonous Plant Research Laboratory, in Logan, Utah, embarked on an extensive investigation. The defect was a good bet, they found, if pregnant sheep grazed on Veratrum californicum, the California corn lily, on day 14 of gestation. Ingestion during later days of gestation induced limb and tracheal malformations. These discoveries led to grazing practices that mostly solved the problem.

Cyclopamine's ability to vandalize development has been well documented in many animals, and the compound has become a research tool for developmental biologists. But it also grabs cancer researchers' attention. In adults, "aberrant activation of the Hh pathway leads to malignancies," among them basal cell carcinoma, as well as prostate, pancreatic, breast, and other cancers, write organic chemist Athanassios Giannis of the University of Leipzig, in Germany, and his colleagues there and at the University of Thessaloniki, in Greece (Angew. Chem. Int. Ed., DOI: 10.1002/anie.200902520). Inhibitors of the Hh pathway, "like cyclopamine, could provide novel therapeutic approaches for treatment of hard-to-cure cancer types," Giannis tells C&EN.

For their part, he and his colleagues developed a 20-step synthesis of cylopamine, starting from a commercially available steroid. They hope their procedure will help make more of the compound and its analogs available to biomedical researchers.

The moral of the story: If a newborn creature has one eye less than it should, find out why the other eye is missing.

Another facial glitch with a chemistry backstory is the "SARDONIC SMILE," and new details have come to light.

In pre-Roman Sardinia, according to ancient historians, elderly citizens unable to pay their way in society were first intoxicated with an herb and then beaten to death or thrown from a cliff. Talk about cutting back on health care costs! The herb, long presumed to be of the Oenanthe (wine flower) genus, causes the facial muscles to lock into a strained smile, a trait referred to in ancient literature as risus sardonicus. The doomed seniors, it would seem, went to their deaths with a forced smile of sorts.

In a recent issue of the Journal of Natural Products (2009, 72, 962), an international team of chemists, molecular biologists, and neuroscientists reports on its investigation of Oenanthe plants, arguing that their data point to a particular species common in Sardinia, O. crocata, as the elder-intoxicating plant. In a close relative of this plant, the researchers found 17-carbon polyacetylenic alcohols with a neurotoxic mode of action that jibes with historical descriptions of the symptoms.

The researchers first extracted several compounds from the plant's roots and seeds and determined the absolute configuration of three of them, a small chemical advance over previous work with these compounds. They then showed in neuronal cell cultures that two of these toxins—oenanthotoxin and dihydrooenanthotoxin—potently block receptors to the neurotransmitter gamma-aminobutyric acid (GABA). These observations, the researchers contend, point to a molecular mechanism that can account for the sardonic smile ancient authors had described.