Hypervision:
[+]Enlarge
Credit: U of Washington
This prototype is a step toward enhanced contact lenses. 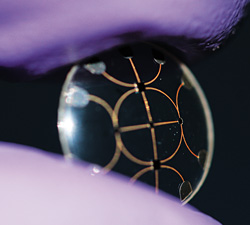 Credit: U of Washington
This prototype is a step toward enhanced contact lenses.

The visionary gadgets that electrical engineer Babak A. Parviz has in his sights are definitely not Ye Olde Contact Lenses. He imagines slivers of plastic that clarify vision while also projecting weather maps, driving directions, and even subtitles for foreign films directly onto a wearer's retinas. By adding semitransparent control and communication circuits, light-emitting diodes, and mini-antennas to the polymer lenses, he and his students at the University of Washington, Seattle, have already taken the first steps toward such ON-EYE REALITY ENHANCERS.

"It will be possible to, say, transmit to the hearing impaired that a fire alarm is in progress if an indicator lights up," Parviz says. He also suspects that these next-generation lenses could add new dimensions for video and computer gamers.

Parviz sees big market potential in the health arena. For example, glucose-monitoring lenses could be useful to diabetics. And lenses with sensors that keep tabs on cholesterol, sodium, and potassium levels in eye cells could have wide application. A wireless data transmitter on the lens could instantly send these data to medics.

But you can't order hypervision contact lenses at your local For Eyes just yet. The components need to be miniaturized further, and the compatibility and safety of the materials have to be certified. Moreover, Parviz notes, getting projected images from the lenses to focus on the retina is no easy task. There are also worries about what such display systems might do to wearers' eyesight. Parviz acknowledges that his research team has no prior experience with such technology, so "the user interface experience design will be a big part of developing these devices." 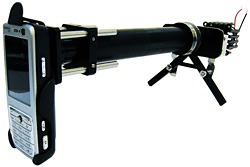 Meanwhile, another group of researchers is aiming to integrate optics into innovative DIAGNOSTIC TOOLS. Driven by the idea of tracking diseases such as malaria and tuberculosis in places that might be underserved by doctors, bioengineering professor Daniel Fletcher of the University of California, Berkeley, and colleagues have attached a smart phone to the end of a fluorescence microscope.

In its latest evolution, the device, dubbed the CellScope, allows easy viewing of parasites in blood or spit samples tagged with special dyes that illuminate pathogenic agents under fluorescent light. The phone's camera can then take a picture of the slide from the end of the microscope for on-the-spot analysis or for sending via cell network to a remote medic.

In the case of the tuberculosis indicator, the inexpensive dye auramine, which binds selectively to TB microbes (Mycobacterium tuberculosis), fluoresces green under LED light, making the bacteria easily detectable. The bacteria can be identified by size and shape, thus requiring less training to interpret than standard tests that demand cell identification. Furthermore, the researchers have developed a cell-phone-based algorithm that can calculate how bad a TB infection is from the number of green signals put out by spots on the slide.

Cell phones are often ubiquitous in developing countries, where medical resources are scarce. So as developers continue to reduce the size of the CellScope and make it less expensive, they hope it will prove useful around the world as well as in the U.S. health care system.