Board, Council Meet In Washington 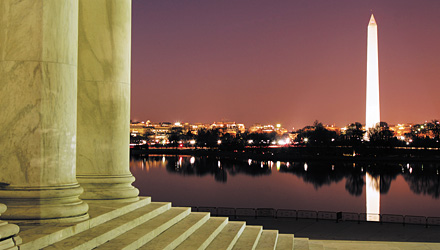 Meetings of the ACS Council and Board of Directors are important governance actions at every ACS national meeting. At their meetings last month in Washington, D.C., the groups met to hear reports from ACS committee chairs and to take actions that will determine the society's future.

At its meeting on Aug. 19, the ACS Council heard a multitude of reports, selected members of three of its committees, and debated but ultimately declined to make changes to the ACS constitution and bylaws that would affect national elections.

Early in the council meeting, the Committee on Budget & Finance gave its semiannual update on the society's financial situation. The committee reported that ACS is expected to end the year with a net contribution from operations of $11.2 million, or $528,000 favorable to the 2009 approved budget. The positive projection is largely the result of expense management initiatives that included a staff reduction implemented in early 2009. With the exception of the guideline regarding the amount of money the society has in its reserves, all board financial guidelines are now being met.

The first petition considered by councilors was the "Petition on Candidate Selection by Member Petition." Members bringing this petition to the attention of councilors aimed to make it explicit within the ACS constitution that members can, if they receive enough member signatures, have their names placed directly on ballots for national election without having to be selected by the Committee on Nominations & Elections (N&E) and be approved by the council. Ballot access by petition is already present in the bylaws.

This petition came to the council with a request for urgent action. Such a request requires three-quarters of councilors voting to agree that the issue is sufficiently urgent that the normal procedures for petition consideration should be bypassed. After considerable discussion, the urgency request failed, gathering slightly more than half of the votes. Consequently, the petition will be ready for action on a normal schedule and will be considered at the council meeting in San Francisco next March. Its provisions are discussed in more detail in the Aug. 3 issue of C&EN (page 41) and will be revisited before the meeting in San Francisco.

Next, the council discussed the "Petition on Election Timelines & Procedures 2009." This petition proposed to shorten certain election timelines and to change petition candidates (who go directly on the ballot if they obtain enough signatures) to petition nominees (who need to be screened by the council along with other nominees chosen by N&E). Councilors ended up asking the petitioners to separate their request into two petitions—one dealing with timelines and one dealing with election procedures—and to then resubmit their petitions for later action.

The Committee on Meetings & Expositions reported that as of Aug. 19, the ACS fall national meeting had attracted 14,319 registrants—the largest Washington, D.C., meeting in history. There were 8,575 regular attendees, 3,159 students, 462 guests, 676 exhibit-only registrants, and 1,447 exhibitors. In keeping with the objective of the National Meeting Long-Range Financial Plan, previously approved by the board and council, the committee recommended to the board an increase of $10 for the 2010 national meeting registration fee. 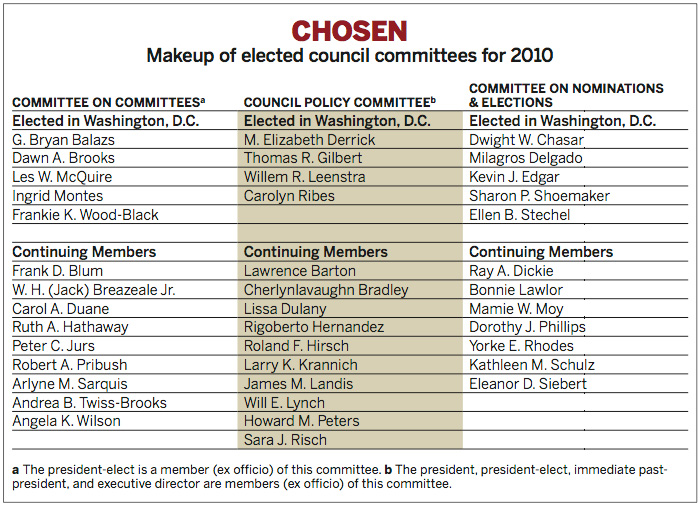 At the Division of Chemical Technicians' request, the council voted to disband the division effective Dec. 31. The Divisional Activities Committee agreed that TECH had, since its founding in 1991, accomplished its mission of enhancing the status of technicians in ACS and integrating them into other technical divisions.

The Committee on Economic & Professional Affairs reported that 43 employers posted 326 jobs for the Washington, D.C., Career Fair, attracting 983 applicants. The showing by employers in Washington was better than the historically low number set at the spring 2009 ACS national meeting in Salt Lake City but is still very low, reflecting the current job market in the U.S.

At its meetings, the ACS Board of Directors approved nominees for the 2010 Perkin Medal and the Alan T. Waterman Award. The Perkin Medal, awarded by the American Section of the Society of Chemical Industry to a scientist residing in the U.S., recognizes innovation in applied chemistry resulting in outstanding commercial development. The Alan T. Waterman Award, presented by the National Science Foundation, recognizes an outstanding young researcher in any field of science or engineering.

Also at the board meetings:

• The Committee on Professional & Member Relations announced the designation of "Dip-and-Read Tests for Blood & Urine Glucose" (the work of Alfred H. and Helen Free) as a National Historic Chemical Landmark. The committee also reported on its approval of a new health care policy statement, received from the Committee on Economic & Professional Affairs.

• On the recommendation of the Committee on Public Affairs & Public Relations, the board accepted the key terms in a draft memorandum of understanding between ACS and the Royal Society of Chemistry. The memorandum discusses plans for ACS and RSC to develop and distribute a primer, along with a series of joint seminars, on sustainability. It also calls for training scientists in communicating the global challenges of sustainability to nontechnical audiences.

• On the recommendation of the Committee on Budget & Finance, the board voted to fund a new program, called Science Coaches, and to reauthorize the Green Chemistry Institute in the 2010 budget.

• The board received a briefing on a new program to equip ACS members to be more effective representatives for chemistry. It is called the Chemistry Ambassadors program, and information may be found at www.acs.org/chemistryambassadors.

Policy
ACS Board Elects Chair, Executive Committee Members
Policy
Official Reports From The Salt Lake City Meeting
Policy
Official Reports from the Philadelphia Meeting
Share X
To send an e-mail to multiple recipients, separate e-mail addresses with a comma, semicolon, or both.
Title: Board, Council Meet In Washington
Author: Linda R. Raber
Chemical & Engineering News will not share your email address with any other person or company.