LOOKING FOR EYE DRUGS
[+]Enlarge
Credit: Sirion
Sirion scientists are trying to dampen vitamin A delivery to the eye. 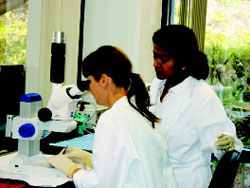 Credit: Sirion
Sirion scientists are trying to dampen vitamin A delivery to the eye.

After years of ignoring the field, drug companies are starting to focus on treating serious eye diseases. A cadre of small-molecule drugs to treat dry age-related macular degeneration (AMD) is making its way into the clinic, offering patients hope that the first real treatment for the disease could soon be available.

Upward of 15 million Americans have some type of macular degeneration, an eye disease that comes in two forms: a dry form in which vision slowly deteriorates and a wet form that aggressively knocks out eyesight when new blood vessels proliferate under the retina. Most sufferers have the dry form of the disease, although for some people it can evolve into the wet form.

Dry AMD is caused by the breakdown of light-sensitive cells in the macula, a yellow spot at the center of the retina, the tissue responsible for converting light into electrical impulses that get sent to the brain. When those light-sensitive cells start to degrade, the initial result is slightly blurred vision. Over time, however, vision loss can occur; people with severe dry AMD commonly have a blind spot in the center of their field of vision.

Today, the only treatment for dry AMD is high doses of antioxidant vitamins and zinc, a regimen that has been shown to lower the risk of the disease progressing by 20–30%, says Paul Sternberg Jr., a retina specialist at Vanderbilt Eye Institute. “But that still means the majority will progress,” Sternberg says. “It’s an enormous market for industry and also an enormous cause of vision loss in this country.”

Yet until recently, Sternberg notes, the pharmaceutical industry had little interest in drugs that treat AMD. That all changed when Genentech developed the wet AMD treatment Lucentis, an antibody fragment that blocks the VEGF receptor, thus preventing new blood vessels from growing in the back of the eye. As the first nonsurgical treatment for wet AMD, the drug has been hugely successful; sales reached $875 million in 2008.

Suddenly, industry sees big potential in treating AMD. At least six drugs are in clinical trials to treat dry AMD; most of them are small molecules that can be taken as a pill or administered as an eye drop.

For patients, a treatment can’t come fast enough. “Most patients know this is a diagnosis that carries some grim consequences,” Sternberg says.

Several companies are developing small molecules designed to intercede in the processing of vitamin A into key light-absorbing pigments required for the visual cycle. When light is sensed, a cis-aldehyde derivative of vitamin A called 11-cis-retinal changes to the trans orientation. That transformation acts as a molecular switch, setting off a cascade of cellular signaling that results in the formation of an image within the visual cortex of the brain. The trans-retinal is then converted back into the cis form to start the process over again.

But over a lifetime, the eye can experience too much light exposure. As a result, a toxic retinal-lipid conjugate called  A2E starts to form within the eye, explains Ryo Kubota, chief executive officer of Bothell, Wash.-based Acucela. A2E and other toxic by-products can build up, triggering a range of damaging events, including the inflammation, cell death, and eventual vision loss associated with dry AMD.

Tampa, Fla.-based Sirion Therapeutics is arguably furthest along in developing a small molecule to interrupt the formation of A2E and other toxic by-products. While a postdoc at Jules Stein Eye Institute of the University of California, Los Angeles, Nathan L. Mata, Sirion’s chief scientific officer, had helped to identify the toxic by-products responsible for eye deterioration. The company was founded to develop compounds that prevent their formation.

Mata first considered 13-cis-retinoic acid, the active ingredient in the acne drug Accutane. Retinoic acid is known to antagonize the RPE65 enzyme, which is critical to the formation of A2E; indeed, the scientist found that the level of the harmful by-products was lower in the eyes of mice given the drug. But Accutane is also known to be toxic, and scientists at Sytera, a firm where Mata worked that has since merged with Sirion, set out to make other, safer compounds that might stop the formation of A2E.

None of the compounds they designed was working, Mata recalls, and the Sytera scientists suddenly hit on a new idea: reducing the flow of vitamin A to the eye altogether.

The company seized on fenretinide, a retinoid derivative now in Phase II trials as a dry AMD treatment. The molecule had been studied for years as a potential cancer drug but was never potent enough. But a curious side effect of the cancer trials—night blindness, which is a delay in how well the eye adapts to the dark—caught the scientists’ attention. It turned out the drug was binding to vitamin A and keeping it from reaching its target in the eye.

There was so much data from the cancer trials demonstrating fenretinide’s safety that Sirion was able to jump straight into a Phase II study of the drug. Interim results of that study presented at an ophthalmology conference this spring showed that eye lesions in patients given the drug grow slower than in those given a placebo. Interestingly, the study indicated that the drug also helps prevent a condition where vessels in the eye start to leak blood into the retina, meaning it might also treat wet AMD.

Acucela, meanwhile, was formed to develop visual cycle modulators of the sort Sytera had originally pursued. A lengthy medicinal chemistry program led the company to its lead drug candidate, ACU-4429, a nonretinoid inhibitor of RPE65. Because the enzyme exists only in the eye, the company believes oral delivery of the drug is a safe way to get it to the back of the eye to do its work.

Currently in Phase I trials, ACU-4429 is expected to begin Phase II studies later this year or in early 2010, Kubota notes. Acucela has partnered with Japan’s Otsuka Pharmaceuticals, which will fund clinical testing of the drug through Phase II.

In addition to addressing the formation of the toxic by-product, the company has also conducted a small study in collaboration with Harvard University that shows slowing down the visual cycle itself can have other benefits. Running the cycle is a major source of energy consumption in the eye. Letting the retina relax a bit can improve the longevity of the light-sensitive cells and help prevent new blood vessels from forming, Kubota explains. This side benefit means ACU-4429 could also prove useful in wet AMD, he notes.

The one pronounced side effect in both the Acucela and Sirion compounds, as observed in the cancer trials of fenretinide, is a delay in how long it takes the eye to adapt to the dark.

Another biotech firm is trying to take a more sophisticated approach to the current use of antioxidants to help the eye guard itself against toxins. Othera Pharmaceuticals’ OT-551 is a powerful antioxidant that protects retinal pigment epithelial cells.

The idea for the drug originated at the National Eye Institute, which tried to use a stable nitroxide radical called tempol to reduce the progression of cataracts, explains Vanderbilt’s Sternberg, who also acts as a consultant to Othera and as an investigator in a clinical trial of OT-551. Tempol didn’t prove useful in cataracts, but Othera thought it could have value in AMD, where light overexposure is the main culprit.

However, the molecule couldn’t get past the cornea when administered as an eye drop and needed some tweaking. Othera licensed tempol and subsequently developed a derivative that, once in the eye, undergoes an enzymatic conversion to tempol.

The small-molecule drug, administered as an eye drop, is currently in the second half of a two-year Phase II trial, and industry watchers think it may prove most effective in early forms of the disease. Sirion’s Mata believes the technique could prove complementary to drugs working on vitamin A processing, thus linking two of the new approaches to treating a serious eye disease.

Drug Discovery
A small molecule in the gut could explain bariatric surgery’s anti-diabetic effects
Vaccines
What will it take to make an effective vaccine for COVID-19?
Oncology
AstraZeneca licenses another Daiichi cancer drug
Share X
To send an e-mail to multiple recipients, separate e-mail addresses with a comma, semicolon, or both.
Title: Gaining Focus
Author: Lisa M. Jarvis
Chemical & Engineering News will not share your email address with any other person or company.