An accumulation of airborne sugar dust led to a 2008 explosion and fire that killed 14 and injured 36 workers at the Imperial Sugar plant outside Savannah, Ga., says the Chemical Safety & Hazard Investigation Board (CSB) in a report released this week. 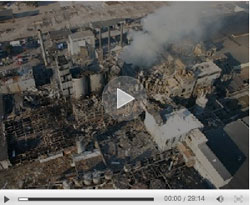 On the circumstances leading to the Feb. 7, 2008, accident, there is little disagreement between CSB and its frequent ally—labor unions that represent plant workers. But the two are deeply split over what should be done to avoid similar accidents.

The accident's cause was ignition of airborne sugar dust that had accumulated for years due to lousy maintenance and inadequate equipment design. A spark from an overheated conveyor bearing likely triggered the primary blast, which was quickly followed by more powerful secondary explosions and fires that ripped through the plant.

Looking at company documents, the board finds a 40-year failure by Imperial to address dust problems, despite management's knowledge that they posed a threat. The board recommends that Imperial and various trade associations implement better training and housekeeping programs.

The tragedy of industrial dust explosions is not new to the board. In 2006, a CSB study discovered 281 industrial dust accidents—many in chemical plants—over a 25-year period, resulting in 119 worker deaths and 718 injuries. Consequently, CSB recommended that year that the Occupational Safety & Health Administration develop a comprehensive dust regulatory standard.

Three years passed, and last April, OSHA announced it would develop the regulation. However, it has yet to take the first step: an advanced notice of proposed rule-making.

Labor unions say the regulatory process will take years, and they want OSHA to implement a dust standard quickly, on an emergency basis, while it draws up a regulation. They had wanted CSB's support in that recommendation. Because of the lack of support, Jackie Nowell, director of occupational safety and health at United Food & Commercial Workers, the union that represents chemical, sugar, and food workers, is now calling for new leadership at the board.

For its part, CSB Chairman John Bresland says, "The board decided that the best way was to allow OSHA to continue and develop a regulatory program." He says he was "disappointed" in the three-year delay, "but my hope is that OSHA will give the regulation priority and develop it as soon as possible."

Industrial Safety
The chemistry behind the Beirut explosion
Consumer Safety
Do we know enough about the safety of quat disinfectants?
Lab Safety
Adapting hijabs for lab safety
Share X
To send an e-mail to multiple recipients, separate e-mail addresses with a comma, semicolon, or both.
Title: Heads Butt Over Deadly Explosion
Author: Jeff Johnson
Chemical & Engineering News will not share your email address with any other person or company.