Investment flows into the U.S. as drugmakers reassess their supply chains

SCALING UP
[+]Enlarge
Credit: SAFC
A researcher at SAFC’s Madison, Wis., high-potency API plant, where capacity will be expanded. 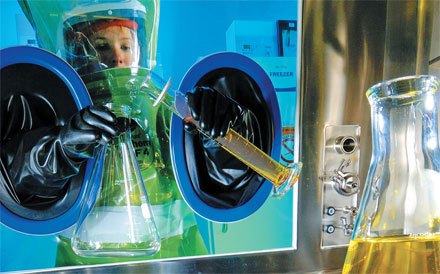 Credit: SAFC
A researcher at SAFC’s Madison, Wis., high-potency API plant, where capacity will be expanded.

Ground-breaking for a $30 million pharmaceutical chemical plant last year in Germantown, Wis., was hailed as a bold move on the part of Michael W. Major, the entrepreneur behind the project. Speaking at the event, Joseph Acker, president of the Society of Chemical Manufacturers & Affiliates (SOCMA), a trade organization representing custom chemical manufacturers, applauded Major for placing a bet on U.S. manufacturing in a sector that had been trending for years toward India and China.

Major’s company, Cambridge Major Laboratories, however, is not alone in investing stateside.

A reassessment of the competitive advantage of U.S. active pharmaceutical ingredient (API) sourcing has been under way for some time as drugmakers weigh the full cost of doing business in Asia. Talk of the pharmaceutical outsourcing balance tilting back to the U.S was heard as far back as the 2007 ChemSpec custom chemical conference in Amsterdam, with several companies citing concerns (C&EN, July 16, 2007, page 18). Casualties from a purposely contaminated pharmaceutical ingredient, heparin, last year may result in a more marked shift back to the U.S.

Drugmakers are finding that the cost advantages of outsourcing to China are not as clear-cut as they might be in other industries, largely because of the costs of regulatory compliance and quality assurance, notes Michael A. Santoro, an associate professor at Rutgers Business School who specializes in business ethics.

In the pharmaceutical industry, Santoro says, quality control constitutes nearly 30% of the cost of manufacturing. This cost is part of what makes U.S. manufacturing so expensive. Taxes and labor costs are also big contributors. When drug ingredients are imported, however, drugmakers have to add the cost of conducting their own quality inspections overseas to what they spend on imported pharmaceutical chemicals.

The relationship between manufacturing and innovation is another important consideration, Santoro says. “Think about what a company like Cambridge Major does, working with customers at very early stages of drug development, working closely with engineers and scientists from pharma companies when they are trying to develop compounds.” Such a relationship demands world-class chemistry skills and proximity to API suppliers, both of which favor U.S. producers, he contends.

Having Asian manufacturing assets is still an advantage, however, given that growth in pharmaceutical markets in India and China will far outstrip growth in the U.S. and Europe in the years ahead. Still, producers ranging from California-based Nanosyn, a small discovery services firm that is making a foray into API production, to Saltigo, the German custom chemicals maker, have been investing in new U.S. capacity.

The site also positions Saltigo for growth with large drug companies that typically acquire the types of emerging pharmaceutical and biotech firms Saltigo is pursuing, notes Timothy D. Fitzpatrick, manager of the Redmond plant. Saltigo would be able to transfer projects to Germany for clinical and commercial supply.

SAFC, the fine chemicals division of Sigma-Aldrich, is currently investing about $40 million to upgrade its U.S. operations. It is adding viral products manufacturing at a new site in Carlsbad, Calif., and high-potency API capacity at its Madison, Wis., plant. The firm operates about 60% of its manufacturing in the U.S. and the rest in Europe and is also building a cGMP fermentation plant in Israel.

SAFC’s investments are directed at developing existing areas of strength, says Trevor Calkins, director of process development at the Madison facility. Such a strategy will not result in manufacturing on the ground in Asian growth markets, he notes, but increasing customer interest in U.S. and European production more than compensates for the disadvantage.

“Companies want to take control of their supply chains, and they are looking for suppliers with a strong track record with FDA,” Calkins says.

Ash Stevens, a contract research and manufacturing firm in Detroit, has all of its assets in the U.S., and it is adding more. The company invested $13.5 million building its API business between 2000 and 2003, and it has spent another $5 million since, according to Chief Executive Officer Stephen A. Munk. Ash Stevens is spending an additional $6 million on improvements including a new hydrogenation cell due on-line next year.

Munk notes that Ash Stevens currently manufactures the active ingredient in Velcade, a multiple-myeloma treatment codeveloped by Johnson & Johnson and Millennium Pharmaceuticals, which is now owned by Japan’s Takeda Pharmaceutical. “We anticipate an inspection from Mexico in October,” he says. “We sell internationally.”

In contrast, at PCI Synthesis, generic APIs make up as much as 40% of sales. The company does all its manufacturing in the Boston area, according to CEO Ed Price. Most of the firm’s work is with small and emerging drug companies and biotechs, although it does have big pharma customers, he notes.

Originally called Polycarbon Industries, the firm became PCI in 2005 when it purchased Borregaard Synthesis’ plant in Newburyport, Mass., after an explosion at a PCI plant in Leominster, Mass. The acquisition effectively doubled PCI’s sales and increased manufacturing capacity 10-fold. The firm also operates a plant in Devens, Mass.

PCI has invested nearly $2 million in the two plants over the past two years, Price says. He expects sales of approximately $14 million this year, compared with $10 million in 2008.

The French fine chemicals producer PCAS, meanwhile, used a partnership as a port of entry to the U.S. It recently formed a kilo-scale API manufacturing joint venture with Nanosyn. For PCAS, the deal marks a significant step up in pursuing business with U.S. biotechs. For Nanosyn, the new venture coincides with the acquisition of the API-manufacturing assets of Seres Laboratories in Santa Rosa, Calif.

“Our idea is to offer discovery, process development, and API production with as little technology transfer as possible,” says Olga Issakova, executive vice president of Nanosyn and CEO of the joint venture.

The question of where to source cGMP intermediates and APIs sparked contention at a panel discussion on regulatory oversight of Asian drug manufacturing at the Chem Outsourcing Conference in Long Branch, N.J., earlier this month. Rutgers’ Santoro, a panelist, opined that China’s regulatory system puts the country’s API producers “decades away” from viable participation in the supply chains of Western drug companies. “China is not ready to manufacture drugs for the U.S. or any other market,” he said. SOCMA’s Acker, another panelist, suggested that the U.S. regulatory system is part of the problem, given its inability to adequately inspect foreign suppliers.

Attendees from drug companies and Asian contract manufacturers acknowledged problems with quality and safety but insisted that reputable companies in China and India are already playing a key role in the supply of drug ingredients. “We operate to Western standards,” said Charles Huang, vice president of business development at Sundia MediTech, noting that the Shanghai-based firm was founded by U.S.-trained scientists. Sundai, which has done pilot-scale API work at rented facilities in China, began construction on its first cGMP pilot plant but delayed work for a year because of the economic slowdown. Huang says that construction recently resumed with an uptick in business and that the first phase of the project, with capacity to produce four APIs, will be operational by the first quarter of next year.

Steven E. Spardel, vice president and general manager of contract manufacturer Porton Fine Chemicals, a company started in Chongqing, China, by former AkzoNobel scientists, agreed. “At the end of the day, it comes down to two factors,” he said. “Risk and return.” U.S. and European drug companies evaluate these parameters closely, he said, noting that Porton’s new 300-m3 multipurpose plant is “filling up with business.”

Participants from all corners of the industry agree that India and China will continue to play an important role in pharmaceutical supply chains, even as regulation tightens and prices in Asia rise. But growth in Asia, they say, will not always happen at the expense of U.S. production.

“We cannot have China and India producing for us and hope to take care of our health care,” Cambridge Major’s Major says. The links between discovery, development, and manufacturing, he claims, can best be maintained by U.S. outsourcing partners. “There is a need for domestic manufacturing. We need to invest in the development of new drugs,” he says.