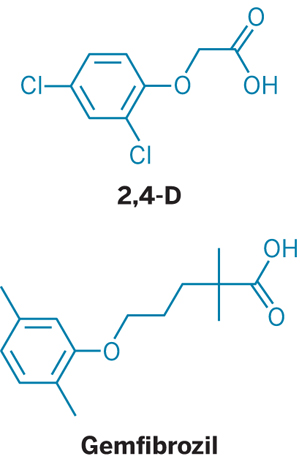 For the first time, researchers have discovered that some common herbicides such as 2,4-dichlorophenoxyacetic acid (2,4-D) and lipid-lowering drugs including gemfibrozil can prevent activation of a human taste receptor involved in energy metabolism and glucose regulation (J. Med. Chem., DOI: 10.1021/jm900823s). A team led by Bedrich Mosinger of the Monell Chemical Senses Center, in Philadelphia, tested these two classes of compounds because of their structural similarity to lactisole, a coffee bean component that inhibits the detection of sweet taste by blocking the receptor, which is known as type I taste receptor 3 (T1R3). The researchers recommend that the herbicides be screened for adverse metabolic effects on humans by using human tissues; these effects can’t be detected in rodent studies, because neither the herbicides nor the drugs affect the rodent version of the receptor. The team’s findings also open up a new pharmacological target for drug developers: Compounds could conceivably be designed that selectively target T1R3 in humans to treat metabolic syndrome, obesity, and type 2 diabetes, according to the researchers.