What’s Silly String, and why is it so sticky and light?

It's a party for polymer chemistry, all in a can 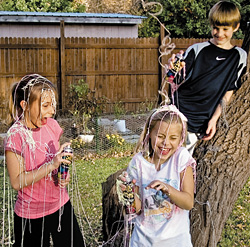 It was, perhaps, an unintended consequence of the wars in Iraq and Afghanistan that a children's toy got an image makeover. Once the domain of Halloween hooligans plastering innocent mailboxes and car windshields, the sticky ribbons known by the trademarked name Silly String got a new reputation as a weapon for heroes confronting a serious kind of terror.

U.S. Navy Explosive Ordnance Disposal teams, who defuse and dispose of explosives, have been using Silly String to find booby traps since 1997 in Bosnia, says G. J., a Navy Master Explosive Ordnance Technician who most recently served in Afghanistan. "By spraying it in front of your intended path in confined spaces, in the threshold of a doorway, or at the gate outside a compound, you can detect trip wires or other hazards," he says.

In 2006, Army mom Marcelle Shriver heard a similar story from her son and organized a massive donation of sprayable streamers for the troops, receiving extensive media coverage in return. The hoopla was a boon for the company that makes Silly String.

Patented in the 1970s by Wham-O Manufacturing, the same outfit that brought the Hula Hoop to the masses, the rights to Silly String were later handed off to Car-Freshner, best known for its tree-shaped air fresheners, and Just For Kicks, Car-Freshner's toy division, says Rob Oram, product marketing manager at the company.

The stringy stuff comes in an aerosol can that helps make streamers from the chemicals inside. Wham-O's patent may not contain the current formula, which is a trade secret, but it certainly serves up the chemical principles inside the can. 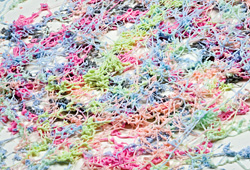 Silly String, and many of the other half dozen or so spray streamer products sold in the U.S., start out as a liquid containing a polymer resin, which provides the string's molecular framework. The original patent calls for polyisobutyl methacrylate or similar molecules, and a flame retardant such as hexabromobenzene to prevent the eventual dried-up string from catching fire. A touch of pigment provides the color.

Spray streamers balance stickiness, or adhesiveness, with an ability to hold themselves together, or cohesiveness. A few other parts of the original formula contribute to that balance. Plasticizers such as dibutyl phthalate boost the polymer's strength and cohesiveness while ensuring it is still sticky to the touch. Silicone fluids such as dimethyl siloxane make the finished streamers easier to peel away from most targets. A bit of solvent such as dichloromethane keeps everything as a one-phase mixture.

Mixed in with the other ingredients is a surfactant such as sorbitan trioleate, which gives spray streamers their light-as-air feeling by facilitating foam formation. Foams are bubbly materials, and the bubbles get into the spray streamer liquid mixture through their aerosol can housing. Surfactants adsorb at newly formed gas-liquid interfaces, where they lower surface tension and help to stabilize nascent bubbles, says Eric Dickinson, a food chemist with expertise in foams at the University of Leeds, in England.

All the ingredients mentioned so far make up only about two-thirds of what is found in today's cans. The rest is propellant. "Propellant is needed for the same reason it's required for shaving cream—to expel materials out of the nozzle to create the foamlike substance," Oram says. The patent recommends chlorofluorocarbon propellants such as CFC-12, which have since been banned in the U.S. and many other countries because of their ability to deplete the ozone layer. Silly String brand streamers don't contain ozone-depleting propellants; in their place is a propellant that is both nonvolatile and nonflammable, Oram notes.

Liquid spray streamers take on their familiar stringy form when they're propelled up a skinny tube and out of the aerosol can. That process is eerily reminiscent of how another Halloween mainstay, the spider, works with polymers, says biomedical engineer David L. Kaplan of Tufts University. Spiders turn a biopolymer solution into the sticky string we recognize as spider silk.

When a spider pulls the silk protein through a narrow duct—akin to the skinny tube in the aerosol can—the amino acid chains align, coaxing them into their new form, Kaplan says.

Kaplan and his coworkers have taken inspiration from both spiders and Silly String to develop a modified, extra-sticky version of spider silk that behaves like a spray streamer when extruded from a syringe. "We want to use it for medical reasons," particularly as an adhesive, Kaplan says.

Even though sprayable foaming polymers have found some serious applications, no one's forgotten the silly spirit of the invention. Army Sgt. Neil Gussman of Echo Company, 2nd Battalion, 104th Aviation, who was stationed in Iraq in 2009, can vouch for that. "On our big, well-protected air base, we used Silly String as, well, Silly String. People sprayed it on each other in the barracks," he says.

UPDATE: This article was modified on Oct. 31, 2016, to refresh its information and data.

Materials
Polar bear hair inspires stealth fabric
Biomaterials
Periodic graphics: The chemistry of spiderwebs
Business
Food Babe Strikes Again
Share X
To send an e-mail to multiple recipients, separate e-mail addresses with a comma, semicolon, or both.
Title: What’s Silly String, and why is it so sticky and light?
Author: Carmen Drahl
Chemical & Engineering News will not share your email address with any other person or company.