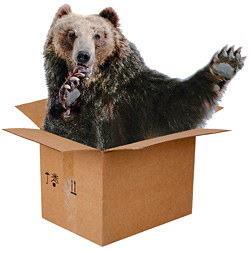 Credit: Shutterstock (both)
Smells like non-2-enal. Prefer to pillage minivans.

N o one likes coming home to find rain-soaked parcels on the doorstep. It's not just the feel of wet cardboard and worries of ruined contents that are off-putting. Chemists in Germany have found that WET CARDBOARD has a drastically more intense odor profile than dry cardboard (J. Agric. Food Chem., DOI: 10.1021/jf901435n).

Michael Czerny and Andrea Buettner of the Faunhofer Institute for Process Engineering & Packaging used aroma extract dilution analysis and high-resolution gas chromatography/mass spectrometry to determine which molecules give cardboard its distinct odor profile. Detailed knowledge about such scents and their sources could help prevent the scent of packaging from permeating its contents, they say—something that's particularly important when there's food in the box.

The researchers found that the classic woody cardboard smell comes from E- and Z-non-2-enal, as well as from an unidentified compound. In total, 36 compounds, including the peach-smelling dodecalactone and the "horse stable-like" 4-methylphenol, contribute to the bouquet.

Czerny and Buettner note that only some of these odor compounds are released from the surface of dry cardboard. The others, they believe, are intermingled with the cellulose in the inner portion of cardboard. When the cardboard gets wet, the water acts as a solvent and releases them, producing a more pungent odor.

Insect splatter is a nuisance for most of us, but for Pennsylvania State University genomics professor Anton Nekrutenko and his colleagues, there's a future in BUG CARNAGE that doesn't involve a squeegee. Rather, they report in Genome Research (DOI: 10.1101/gr.094508.109), it's possible to gather a mass of metagenomic data from the mess on your windshield.

Metagenomics obtains genetic material directly from environmental samples. So far, the technique has largely been used for cataloging microbes. After a long-distance drive to a conference, however, Nekrutenko wondered whether he could apply metagenomic analysis to higher organisms—the insects that met their demise on his bumper.

To test that idea, Nekrutenko recruited some colleagues and outfitted a 2006 Dodge Caravan dubbed "The Wanderer" as the team's sample collector by applying tape to the front bumper. They then took two road trips, one from State College, Pa., to Manchester, Conn., and another from Portland, Maine, to Moncton, New Brunswick.

Matching the meta-genomic data derived from splatter with species proved a bit difficult, the researchers concede, because the genetic code of just a fraction of the world's 10 million or so insect species is known. Still, the group was able to discern significant differences between the two regions.

The black bears of Yosemite National Park have a clear choice when it comes to vehicles that come within reach: A study in the latest issue of the Journal of Mammalogy (2009, 90, 1041) reports that YOSEMITE BLACK BEARS break in to minivans more often than any other model of car.

Stewart W. Breck and coworkers at the U.S. Department of Agriculture's National Wildlife Research Center, in Fort Collins, Colo., surveyed 908 black-bear break-ins from 2001 to 2007. They found that 26% of the vehicles targeted were minivans. The bears even discovered they can easily pop open the vehicle's rear side window like they're opening a soda can.

Why minivans? It's about minimizing effort and maximizing calories, the researchers say. Minivans, which are popular among families with small children, tend to smell of spilled food. They also often carry well-stocked coolers and grocery bags. So if you're a minivan driver heading to Yosemite, bear in mind two things: food lockers and car washes.