Photovoltaic prices will continue to drop, thanks to an oversupply of polysilicon 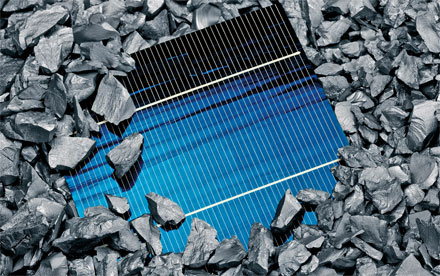 Executives at NextLight Renewable Power have long planned to construct a massive solar energy project in Yuma County, Ariz. Given the region’s hot, sunny climate, they were considering technology that concentrates the sun’s rays to create steam and drive an electric turbine. But last month, when Pacific Gas & Electric agreed to buy the entire output of the project, NextLight disclosed that it has chosen to install polysilicon-based photovoltaic panels instead.

“It would have been a great site for concentrated solar thermal, but it’s a question of cost, benefit, and value to our investors and customer,” explains Jim Woodruff, NextLight’s vice president of government affairs. Photovoltaic solar has been widely criticized for being expensive, but Woodruff says the market for photovoltaics abruptly changed during the project’s planning phase in 2008–09.

Prices of polysilicon photovoltaic modules have decreased by more than 30% in the past year and are likely to continue to decline through 2010, according to the consulting firm Lux Research. In 2007 and early 2008, strong demand for solar panels and a shortage of crystalline polysilicon kept prices high. To take advantage of the high prices, module manufacturers and polysilicon makers quickly ramped up capacity, and now there is an oversupply of both.

The result has been steep price cuts for both polysilicon and solar modules, causing near-term challenges for some firms. But in the long term, lower prices are good for the solar industry, analysts say, and will make solar electricity more competitive with fossil-fuel-generated power. NextLight’s $1.5 billion, 290-MW Arizona project may foreshadow the strong demand that awaits cheaper polysilicon solar panels.

For now, however, the solar industry is dealing with a lot of pain. “The price drop we’ve seen in the last 12 months was led by oversupply at the module level. Just at the time solar manufacturers would have reached their own self-created oversupply, you had the financial crisis, which exacerbated the process,” recounts Lux analyst Johanna Schmidtke. On the plus side, “the free fall in module prices has slowed, and the fall in polysilicon prices means solar makers will be able to cut costs,” she says.

An abundance of raw material is a new reality for the solar industry. Before 2006, the most important customer for polysilicon was the semiconductor industry. Manufacturers of solar modules made-do with leftovers. But by 2007, the growing solar industry was buying close to half the available polysilicon, triggering shortages and high prices. In mid-2008, polysilicon spot prices hit $400 per kg, up from a low of $40 in 2004, according to Dan Reis, solar analyst at investment adviser Collins Stewart.

The rapid run-up in prices had a predictable effect on polysilicon suppliers. “Many new companies entered the market, and existing suppliers started expansion plans. That capacity has begun to come on-line,” Reis says.

Indeed, new production lines are ramping up this year, including an 8,500-metric-ton-per-year addition to Hemlock Semiconductor’s facility in Hemlock, Mich. Hemlock, the world’s largest polysilicon maker, has also begun construction on a $1.2 billion plant in Clarksville, Tenn. The facility will have an initial capacity of 10,000 metric tons and the ability to expand production to 21,000 tons, according to the company. Overall, Hemlock plans to have 40,000 tons of capacity by 2011, up from 26,000 in 2009.

Meanwhile, Wacker Chemie, the number two producer, is also accelerating its expansion. It recently added 10,000 tons to its Burghausen, Germany, facility, 3,000 tons more than initially planned. It is building a $1.1 billion facility at its Nünchritz site in Saxony, which will add another 10,000 tons of capacity by the end of 2011. At that time, Wacker will have an annual capacity of 35,500 tons, compared with 5,000 in 2008. The firm also has purchased land for its own $1 billion plant in Tennessee.

Behind the two leaders are many new entrants in the polysilicon market, including Korea’s OCI Chemical (formerly DC Chemical) and China’s GCL Solar Energy Technology. Reis estimates the two firms will add 6,500 tons of annual capacity in 2009 and will continue to expand from there.

The oversupply will have a big impact on prices. Solar-module manufacturers that buy polysilicon on the open market, rather than under contract, have already seen spot prices fall rapidly, from $150 per kg at the beginning of 2009 to a current level of about $60 per kg. “Production cost for leaders like Hemlock is probably about $30 per kg. That’s important because we will see margin compression” as prices fall, Reis points out. The new entrants had been attracted by the earlier high spot prices, he notes. As those prices dip to as low as $40 per kg, they may be forced to scrap their plans, he says.

Lower polysilicon prices will lead to lower prices for solar modules in early 2010, industry observers say. “It’s unclear through 2010 how low pricing will go,” Schmidtke says. “A further slide is expected, but there is a floor beyond which companies just can’t survive, and they’re going to start getting there. Some of the largest manufacturers might not make it through the lowest level of pricing.” she contends.

Companies that offer “a clear advantage in efficiency and power density won’t see as strong price declines as other firms,” Schmidtke adds. For example, she says, Sanyo, SunPower, and Sharp sell differentiated products for residential markets that may be insulated from the fall.

Module producers in China with low costs and high capacities, including Suntech Power, Trina Solar, and Yingli Green Energy, will have an edge as prices drop, Reis says. “The Darwinian process is under way right now—higher cost regions may not have module facilities in the future,” he warns. Some vendors are already producing solar modules at a price below $2.00 per watt, Reis adds, down from $4.00 per watt in early 2008.

The price competition will also affect manufacturers of thin-film solar panels, which don’t use polysilicon. First Solar has become an industry leader because its cadmium telluride modules have a significant cost advantage over crystalline silicon. The advantage still exists, Reis says, but the company can expect its margins to narrow as overall prices of solar modules come down. Harder hit, he says, will be businesses that produce modules based on amorphous silicon. “My view is the economics of amorphous silicon are extraordinarily challenging. It had an easier time when polysilicon was expensive but will have a very difficult time when it is cheap.”

Lower materials prices are “a double-edged sword for solar-module makers, but overall for the industry it’s more positive than negative,” Reis says. He forecasts demand for solar modules to grow 49% in 2010 alone. “If your raw input falls, your production costs fall. You do have to go to lower prices for your product, but ultimately that can open up new demand,” he points out.

The combination of falling costs and rising demand is inviting speculation over when solar energy might achieve grid parity with energy from power plants. “The expectation is the photovoltaic market will have higher growth over the next five years with more use in the residential and commercial market,” forecasts Georgina Benedetti, a research analyst at Frost & Sullivan. If prices continue decreasing, she says, solar could hit parity in some sunny locations by 2015.

“If polysilicon goes to $40 per kg and the industry keeps lowering costs, we’re getting pretty close to the point where peak production in solar gets very attractive,” Reis agrees. “An excess supply of polysilicon is very positive for the solar industry.”

For its part, Hemlock is prepared to stay in the game. “Although we cannot discuss specific pricing, we can state that Hemlock’s pricing is designed to afford customers the ability to achieve grid parity in the near future,” Homan says.

“Overall it’s a painful experience,” Schmidtke says of the near-term price competition. “But out of it you should get a healthier market that can compete more strongly on its own within the power market.” She adds that some of the biggest players are ramping up capacity even though they are unsure about future prices. “There is a risk that if they build it, they’ll have no place to put it all. But to be a leader they will have to take some risks in the next couple years.”