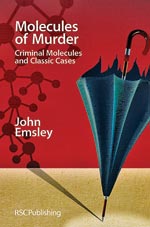 THROUGHOUT THE 19TH and 20th centuries, the British liked a subtlety in their murders, real and fictional, and this book in 10 chapters chronicles the tradition of the quiet pursuit of murder by poisoning. “Molecules of Murder: Criminal Molecules and Classic Cases” follows some interesting poisons from antiquity to the very recent, recounting some well-known crimes and introducing some others not so well-known. The author, John Emsley, is a Ph.D. inorganic chemist who has spent the past few years as a freelance science writer. His 2005 book, “Elements of Murder,” introduced readers to the poisons arsenic, antimony, lead, mercury, thallium, and so on. Now he has continued the story to include other deadly molecules and some of the more complex organic poisons, such as adrenaline and paraquat.

"Many of these cases resulted in the development of a more sophisticated forensic chemistry."

Explores the University of Akron’s pioneering contributions to rubber chemistry, polymer science, and polymer engineering. The author traces the school’s interaction with Akron rubber giants such as Goodyear and Firestone, recounts its administration of the federal government’s synthetic rubber program during World War II, and describes its role in the development and professionalization of the academic discipline in polymers that have become a pervasive part of our material lives, in everything from toys to biotechnology.

Emsley’s new book is divided into two sections of five chapters each. Part I, “Some of Nature’s Deadly Chemicals: From Medicine to Murder,” chronicles the murderous use of ricin, hyoscine (scopolamine), atropine, diamorphine (heroin), and adrenalin. Part II, “Dangerous man-made Chemicals: So Simple, So Useful, So Deadly,” introduces the reader to toxic chloroform, carbon monoxide, cyanide, paraquat, and polonium.

The format of the chapters is straightforward. A history of the poison and a brief description of its physiological effects are followed by a collection of anecdotes involving the material. Many of the stories have been told previously, but the emphasis on chemistry makes them well worth retelling. Plenty of trivia and unusual facts throughout the book should please the most jaded “Jeopardy” fan. Many of these cases resulted in the development of a more sophisticated forensic chemistry.

One well-known case recounted in the book is the 1978 murder of a Bulgarian dissident, Georgi Markov, in London. Markov was walking along when he felt a sharp pain in his leg. He turned around to find a man with a folded umbrella. The umbrella was actually a weapon that fired a small pellet into his leg. The pellet contained the extremely toxic ricin extracted from castor beans. Markov died four days later.

Another Bulgarian, Vladimir Kostov, was shot in a similar manner in Paris but managed to survive the assassination attempt. Emsley details how the materials used in the assassinations were eventually traced to the Bulgarian secret police who were trained in their use by the now-defunct intelligence service of the former Soviet Union, the KGB. Most of the information on the assassinations was destroyed when the communist government fell in Bulgaria. Ricin has been in the recent news as a possible terrorist weapon.

Because ricin poisoning can mimic certain diseases, techniques for its identification in humans are now available. Vaccines to prevent symptoms of poisoning are also now available.

Toxins from plants have always been a source of poisons because they are beneficial in one dose and deadly in another. Emsley describes two such alkaloids, hyoscine and atropine.

In yet another oft-told tale, the book recounts the 1910 murder in England of Belle Elmore, better known as the wife of the notorious Dr. Crippen. Mrs. Crippen was a minor but popular singer in Edwardian London. Dr. Crippen was, by most standards, a con artist with problems on both sides of the Atlantic. As many stories of the infamous crime tell, Mrs. Crippen had the money and Dr. Crippen had a mistress, ensuring that their marriage would come to an unpleasant end.

The murder happened when, after a small party, Dr. Crippen, who had earlier purchased hyoscine or scopolamine from a pharmacist, apparently gave his wife a drink containing it. Instead of dying neatly, she must have required a coup de grace that made the body impossible to pass off as a natural death. Crippen disposed of the body by removing the flesh, treating it with quicklime and burying it in the basement of his house.

After the murder was discovered and the body located, Crippen and his mistress—interestingly disguised as father and son—boarded a ship for Canada. The ship’s captain recognized Crippen and radioed the authorities in London, something unusual in 1910. A faster ship with a pursuing detective chased Crippen to Canada and he was arrested there. At his trial, he was convicted of murder, and he was subsequently hanged. The trial involved the well-known pathologist Sir Bernard Spilsbury (who appears again later in the book). This case strained the limits of the known sciences of the time, including an identification of the victim from soft tissue (a recently questioned identification), the chemist’s identification of the poison, and the use of the new “wireless” for communication to alert the police.

Atropine appears in another case of marital discord that is chronicled in the book. In 1994, a biologist, Paul Agutter, decided to kill his wife with atropine put into a bottle of tonic water. To throw off suspicion, he poisoned several bottles of tonic water at a local store. As his wife became ill and collapsed, he called the local doctor and left a message on his machine. The message, however, was picked up by another doctor who dispatched an ambulance immediately. The technicians recognized the seriousness of the situation and collected the tonic bottle and drink for analysis. The wife survived the attempt. Agutter was arrested, convicted, and served prison time. After parole, he went to work for the University of Manchester, in England, where he taught philosophy and medical ethics.

Chloroform is well-known as an anesthetic but rarely thought of as a poison. The history of chloroform is recounted in the book in some detail. The general consensus in the 19th century was that using chloroform was a safe way of limiting pain in operations and childbirth. The margin of safety for anesthetic use was rather small, however, and thousands of people died during surgery. Chronic recreational inhalation can also lead to liver damage. The 2005 murder of a child by inhalation of chloroform is recounted in the book and the direct ingestion of toxic amounts of chloroform in two Victorian-era murder cases is described.

Carbon monoxide, a gas that can kill at low concentrations (~0.1%), quite often accidentally, is covered in one chapter of the book. Emsley explains that intentional use of CO to commit suicide is common, but occasionally it has been used to commit murder. Accidental death from carbon monoxide kills about 250 people a year in the U.S., he writes, and thousands of people who have accidentally breathed it require treatment. About 1,000 people a year kill themselves with CO, usually from running cars in a closed garage, according to the author.

Carbon monoxide at low levels in the human body can produce hallucinations. Emsley speculates in the book that carbon monoxide that leaked from the town gas lines used to illuminate Victorian-era homes was responsible for the many supernatural sightings and hauntings reported in that time period. The CO suicides of Sir Bernard Spilsbury, the noted pathologist, and writer Sylvia Plath are recounted in this chapter. The chapter concludes with the story of Adair Garcia’s 2002 murder in California of five of his children using a charcoal grill to produce carbon monoxide.

The use of cyanide as a poison could fill several books, let alone a chapter, but Emsley provides enough detail in his book to satisfy the not too bloodthirsty. The 1982 Chicago Tylenol murders in particular are covered. These murders resulted in major changes to the packaging of over-the-counter pharmaceuticals and a new forensic discipline to test for product tampering.

Continuing with a Russian theme, the book recounts the 1916 complex murder of the mad monk Grigory Rasputin by royalists concerned with his influence on the royal family. He was first poisoned with cyanide, then shot, and eventually drowned. Was the dose too low to be fatal or did the presence of sugars limit the effectiveness of the cyanide? Emsley asks this in the book.

A final Russian story, the 2006 assassination of Alexander Litvinenko, a Russian émigré and writer, by polonium-210, rounds out the history of poisonings the book details. Litvinenko was a former member of the KGB and the Russian Federation successor, the Federal Security Service (FSB). His writings reveal that members of the FSB were involved in illegal activities, and he was regarded by them as a traitor. He became very ill after meeting in London with several Russian surrogate agents. After a number of wrong diagnoses, Litvinenko eventually was found to be suffering from poisoning by the radioactive isotope, a material almost certainly produced in the former Soviet Union. A radioactive trail was found throughout London and led back to Moscow. With no arrests and stonewalling by the current Russian government, this story has yet to reach a satisfactory ending.

Further chapters in Emsley’s book describe murders with heroin, adrenalin, and paraquat. The science of toxicology, the synthetic genius of chemists, and the perverse nature of people probably could make for many more books.

This book is clearly written and much easier to digest than the compounds it describes. It also includes a glossary to help readers understand unfamiliar terms and the differences between U.K. and U.S. English. A bibliography also helps the reader pursue the history of other crimes and molecules. Emsley has written a book that satisfies the true-crime reader as well as the science-oriented specialist. I’m sure Gil Grissom, former head of the forensics investigation team in the TV show “CSI,” would have a copy on his shelf.

Charles S. Tumosa is a chemist who retired from the Smithsonian Institution in 2006 and teaches part-time in the University of Baltimore’s Forensic Studies Program.