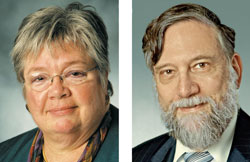 As 2009 draws to a close and signs of a modest recovery in the global economy begin to emerge, we want to take this opportunity to provide American Chemical Society members with an update on the society’s finances and briefly recap some of the difficult actions that were taken this past year to ensure the society’s financial sustainability.

The society is currently projected to end the year with a net contribution from operations that is slightly favorable to the 2009 approved budget of $10.7 million. If the projected results hold up, the society’s financial performance will represent a noteworthy accomplishment during what many economists are calling “The Great Recession.” That said, ACS is not immune to the adverse effects of the global downturn.

The economic pressures impacting our members, our institutional customers, and the larger chemical enterprise are also impacting ACS. We have seen weakness in revenue across all major categories. Electronic and printed services, advertising, meeting registration fees, investments, and dues are all expected to be down from the approved budget. These shortfalls are expected to be offset by a combination of board-approved contingency plan actions taken early in the year and a series of expense mitigation initiatives implemented across the society by ACS management. These actions included a strategic reduction in force, a hiring freeze in society programs and administrative units, cuts in discretionary spending, curtailments in the society’s postretirement benefit plans, a renegotiation of vendor contracts, and the implementation of business process changes that resulted in operating efficiencies.

In addition to the contingency plan actions and expense management initiatives, the ACS Board engaged in extensive discussions about how to optimize the allocation of limited resources to provide optimal value to members, the profession, and the public. There was consensus within the board that ACS should strategically deploy to areas that are core to our mission, where ACS can make a unique contribution and is uniquely positioned to excel, and that also provide ACS with a competitive edge for the future.

Using these guiding principles, ACS senior management was asked to develop multiple redeployment scenarios for board consideration. In developing the scenarios, management relied on several resources to inform the process: the ACS mission and strategic plan, the 2006–09 PRAG reports (Program Review Advisory Group), the 2007 Member Satisfaction Survey, the 2009 Budget & Finance Subgroup Report on Program Prioritization, the 2009 ACS Contingency Plan, and management’s overall assessment of the programs’ strategic impact and effectiveness.

In August, the board considered the redeployment scenarios and chose one that reduced or eliminated support for several society programs by $1.2 million and increased financial support of eight programs by $1.1 million (society programs include Membership & Scientific Advancement, Education, and the Office of Public Affairs). These changes serve to sharpen our strategic focus on areas that enhance our value to ACS members while also advancing the society’s broader mission.

Looking ahead to 2010, there are signs that the worst of the recession is behind us and we are now at a turning point. However, a robust recovery appears unlikely. Although the massive layoffs associated with mergers, restructurings, and plant closings in 2008 and 2009 should subside, conditions within the U.S. chemical enterprise are expected to remain challenging. At ACS, we fully expect another difficult year in 2010 with both revenues and expenses essentially flat compared with the 2009 year-end projections.

Society management continues to seek opportunities for operating efficiencies and will remain vigilant in its efforts to contain costs. And although the society’s financial health is improving, the ACS Board of Directors and management are keenly aware of the risks that face the society. We intend to monitor the economic situation closely and are prepared to adjust course if circumstances require it.

Budgetary pressures have led to high reliance on our publishing units—CAS and ACS Publications—for support of core ACS operations. Despite those pressures, the society continues to reinvest in its publishing units and is actively exploring new sources of revenue through its new business development efforts. And as noted earlier, we are strategically redeploying society program resources to core programs that enhance value to ACS members.

This has been an unusually difficult period and one that will long be remembered. But we should remind ourselves that the society has weathered many economic storms during its 133-year history and has always emerged well-positioned to continue the tradition of outstanding service to ACS members and the broader chemistry enterprise.

We extend to all our members best wishes for a happy, healthy, and prosperous new year.

Governance
Impact of COVID-19 on ACS finances
Policy
What are ACS Financial Planning Conferences?
ACS News
ACS Launches New Program Management Initiative
Share X
To send an e-mail to multiple recipients, separate e-mail addresses with a comma, semicolon, or both.
Title: 2009: A Year To Remember
Author: Judith L. Benham, Board Chair, and Dennis Chamot, Chair, Committee on Budget & Finance
Chemical & Engineering News will not share your email address with any other person or company.