ZeaChem will use its $25 million to expand this semiworks plant making ethanol and ethyl acetate.
[+]Enlarge
Credit: ZeaChem 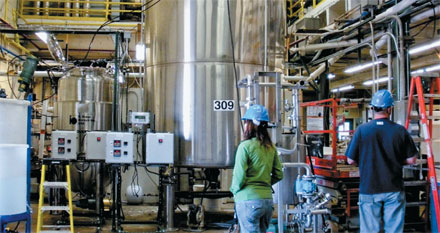 The nascent U.S. biorefining industry is receiving a half-billion-dollar injection from the Department of Energy. The money will go to 19 projects, most of which seek an as-yet-unattained goal: the large-scale production of fuels and chemicals from cellulosic and other nonfood agricultural sources.

The $564 million in grants, from the American Recovery & Reinvestment Act, will be matched with funds from private sources for a total investment of almost $1.3 billion, DOE says. “These projects will help establish a domestic industry that will create jobs here at home and open new markets across rural America,” Energy Secretary Steven Chu said in announcing the grants.

U.S. companies already produce billions of gallons of fuel ethanol from corn, but the government’s goal is for future biofuels to be based on nonedible feedstocks. In 2010, fuel blenders will be required to use 100 million gal of cellulosic biofuels, and the requirement rises annually from there.

Several of the projects will produce industrial chemicals. Archer Daniels Midland is getting $24.8 million for a plant in Decatur, Ill., that will produce ethanol and ethyl acrylate by acidifying biomass. Myriant Technologies is receiving $50 million to help build a plant in Lake Providence, La., that makes succinic acid from sorghum (see page 23).

Although many of the companies need more money before they can start construction, Dallas Kachan, managing director of Cleantech Group, a research, events, and advisory company, says private investors generally have confidence in projects that win the government funding. Projects that don’t, in contrast, have a harder time attracting investors. “DOE is picking winners and, by definition, losers,” Kachan says.

According to Kachan, investors’ long-term transportation bet is on electric vehicles. But the opportunity for transitional biofuels is still real. “Liquid-fuel cars aren’t going away within any of our lifetimes,” he says.