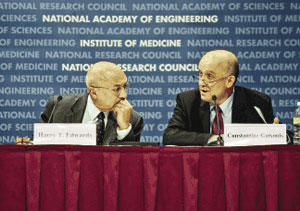 THE FORENSIC SCIENCE currently used by federal, state, and local law enforcement agencies has numerous deficiencies, according to a report released last week by the National Research Council, the research arm of the National Academies. It suffers from a lack of standards, insufficient oversight, and flaws in interpretations, the report says.

The congressionally mandated report, "Strengthening Forensic Science in the United States: A Path Forward," recommends actions for improving forensic science through government oversight, research funding, and education. The report was sponsored by the National Institute of Justice, which is part of the Department of Justice. The agency says it is evaluating the report and considering how best to address its findings and recommendations.

The problems with forensic science have many roots, the report states. Most forensic techniques have evolved piecemeal and vary between labs and jurisdictions, explained Constantine A. Gatsonis, report committee cochair, at a press conference. Gatsonis, a professor of biostatistics at Brown University, added that these techniques are often administered by law enforcement agencies, which can introduce bias.

To address these problems, the report says, "Congress should establish and appropriate funds for an independent federal entity dedicated to forensic science," which Gatsonis said would be called the National Institute of Forensic Science. This entity should be charged with establishing and enforcing best practices; accrediting forensic science labs; certifying forensic scientists; and funding state and local forensic science agencies, independent research, and educational programs, he noted.

Forensic tools for examining things such as fingerprints, ballistics, DNA, controlled substances, fiber evidence, paints and coatings, and explosives were evaluated in the report. The study found that some of these analyses—including the interpretation and presentation of the scientific data—need to be improved.

"The chemistry is not that bad," says Jay A. Siegel, report committee member and a professor in the forensic and investigative sciences program at Indiana University-Purdue University, Indianapolis. It is the standards and the variable interpretation of the data that are inadequate, he tells C&EN.

For example, despite the use of well-characterized analytical methods such as infrared microscopy or pyrolysis gas chromatography in fiber analysis, no criteria exist for determining a match or the significance of a match, the report states.

In such situations, experimental limits need to be clearly described and uncertainties in the data need to be acknowledged, the report points out. There is no absolute science, noted Gatsonis and his cochair, Harry T. Edwards, senior circuit judge for the U.S. Court of Appeals for the District of Columbia Circuit. They also suggest that the terms used by forensic scientists need to be clarified and standardized for the profession.

The report does not offer any guidance for reassessing past convictions or pending cases, but its recommendations are expected to have an impact on examining forensic evidence. The report committee has briefed Congress and is anticipating talking with them again, according to Edwards.

"For too long, forensic science professionals have not had the support or management needed to identify the real strengths and weaknesses of different assays and techniques," Peter J. Neufeld, codirector of the Innocence Project, a national litigation and public policy organization dedicated to exonerating wrongly convicted people, said of the report. "This report provides a road map for rectifying that problem."