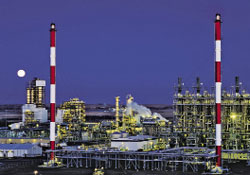 THE FINANCIAL CRISIS has forced Nova Chemicals to sell out on the cheap. International Petroleum Investment Co. (IPIC), an arm of the government of Abu Dhabi, United Arab Emirates (U.A.E.), that also controls the Austrian polyolefins firm Borealis, has agreed to pay $2.3 billion, including debt, for the Calgary, Alberta-based maker of polyethylene and styrenic resins.

Nevertheless, the purchase is more of a bailout than a sweetheart deal. Nova's shares traded at more than $32.00 a year ago. Between the economic downturn and the credit crunch, the company has been scrounging for cash to meet its debt obligations.

In a conference call following the deal's announcement, Nova CEO Jeffrey M. Lipton told analysts that the company had been considering a number of options, including a private equity deal, borrowing more money, or issuing more bonds. "Compared to a wide range of alternatives our company has explored over the number of months we have been doing this work, the IPIC agreement was assessed to clearly be the best alternative for Nova Chemicals," he said.

In a note to clients, JPMorgan Chase chemical stock analyst Jeffrey J. Zekauskas said that Nova has fallen hard. "Nova Chemicals effectively acknowledged that it did not have the stomach to face the current economic and petrochemical downturn with its relatively high level of financial leverage," he wrote, noting that the firm is selling out "at a far cry from the peak price for Nova of $52.00 reached in 2004."

Nova will retain its name. As planned, Christopher D. Pappas, Nova's chief operating offer, will take the reins from Lipton in May.

With sales of $7.4 billion last year, Nova is North America's fifth-largest producer of ethylene and polyethylene. According to Mark Eramo, a consultant with Chemical Market Associates, Nova's greatest strengths are its massive ethylene operations in Joffre, Alberta, which are based on low-cost natural gas in the region. "From a North American perspective, Nova is sitting on a very competitive site in Joffre," Eramo says.

The company also operates an ethylene cracker in Corunna, Ontario. A polystyrene joint venture with Ineos and a specialty styrenics unit have struggled in recent years.

Lipton expects no regulatory hurdles for the deal because there is no overlap with IPIC's other big petrochemical business, Borealis, which primarily operates in Europe and through its Borouge joint venture in the U.A.E. with Abu Dhabi National Oil.

IPIC is getting a bargain, Lipton contends. He said the replacement value for Nova's plants is more than $10 billion. According to Lipton, the financial crisis is creating similar situations throughout the economy. There are number of companies, he said, "with first-class assets and first-class businesses whose long-term value is being impacted by concerns about today's financial world."