Greenhouse gas may change the flavor of broccoli 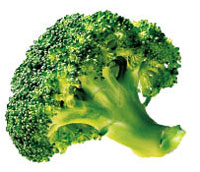 Adding carbon dioxide to the atmosphere can cause not only warmer temperatures and increased plant growth but also different chemical profiles within plants such as broccoli, reports a group led by Angelika Krumbein of the Leibniz Institute of Vegetable & Ornamental Crops, in Germany (J. Agric. Food Chem., DOI: 10.1021/jf903280w). Krumbein and colleagues grew broccoli in greenhouse chambers with varying amounts of CO2 in the atmospheres. They found that higher CO2 concentrations appeared to stimulate photochemistry, as measured from the fluorescence of chlorophyll molecules in the broccoli. Chemically, this translated into an increase in the biosynthesis of soluble sugars such as fructose, glucose, and sucrose, as well as volatile aldehydes and alcohols derived from amino and fatty acids. Although the altered chemical profile of broccoli would not affect its nutritional value, the change in volatile chemical composition could play a role in altering the odor and taste of the vegetable, the researchers say.