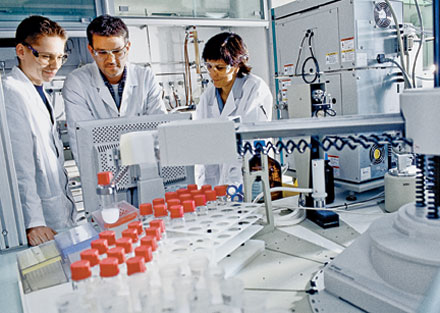 German pharmaceutical and chemical firm Merck KGaA has agreed to spend $7.2 billion to acquire Millipore, a maker of products for bioresearch and bioprocessing. After the acquisition, Merck will create a new business unit focused on lab and industrial products for the life sciences sector with about $2.9 billion in annual sales.

In deciding to boost its chemical operations while staying in the drug business, Merck is bucking a trend that most of its European compatriots have followed. Once-diversified companies such as AkzoNobel, BASF, and Solvay chose to go the opposite route and split apart their drug and chemical sides.

For Merck, however, the deal is an important step in the strategic reorientation of its chemical business, explained Karl-Ludwig Kley, chairman of Merck’s executive board, during a March 1 press briefing.

“This is a combination with an excellent strategic fit which will allow us to cover the entire value chain for our pharma and biopharma customers,” he said. “It contributes complementary high-margin specialty products with very attractive growth potential.”

In 2009, Merck’s pharmaceutical and consumer health business accounted for 75% of its sales. With the acquisition, its chemical side, which also includes liquid crystals and other performance materials, will increase to 35% of an estimated $12 billion in annual sales.

Moreover, the acquisition will double Merck’s chemical sales in the U.S., where the new business will likely operate as EMD Millipore. Merck intends to keep Millipore’s headquarters in Billerica, Mass., and combine it with its own U.S. operations. Kley said he hopes to retain Millipore’s senior management. Together, the companies expect to see about $100 million in cost savings within three years.

For Millipore, the decision to sell is the result of a recent strategic review, according to CEO Martin D. Madaus. Over the past decade, the 56-year-old company has focused on offering products for bioresearch and bioprocessing in pharmaceutical, biotech, and academic markets.

The deal is surprising because a $6 billion bid for Millipore—representing a 50% premium over its recent stock value—had been rumored to be in the works from lab products and instrumentation maker Thermo Fisher Scientific. The Merck acquisition, however, will give Millipore shareholders an even greater return.

Deutsche Bank Securities analysts view the $107.00-per-share Merck offer as “full value” for Millipore and don’t expect competing bids will emerge. But the earlier speculation around a potential Thermo bid has investors now wondering whether that company might be looking for another acquisition target.

Stock analysts at Morgan Stanley see the deal as an overall positive boost for the life sciences products and tools market. Kley pegged annual R&D spending by the new Merck business at about $166 million, placing it third after Life Technologies and Thermo, respectively.

Pending shareholder and regulatory approvals,  Merck and Millipore anticipate completing the transaction in the second half of the year.