The Promise Of Green Chemistry 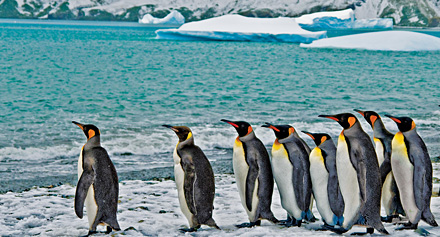 It has been almost five decades since "Silent Spring," by Rachel Carson, was published in 1962. Since that time, and even more recently, we have seen a number of books related to the negative impacts of the global chemical industry. The ones that capture the most attention are those that talk about disasters, corporate malfeasance, legacy issues, chronic health problems, and lawsuits; rarely do you see a book that speaks about the future. "Chasing Molecules: Poisonous Products, Human Health, and the Promise of Green Chemistry

," by Elizabeth Grossman, is different.

The book reports all the concerns we already know about, but it takes the challenges a big step further. The style of this book is similar to Grossman's previous work titled "High Tech Trash: Digital Devices, Hidden Toxics, and Human Health," a well-documented story of the waste and contamination associated with electronics. It was actually the work on electronics and the chemicals associated with them that led to an expanded interest in a wider range of chemicals—thus the drive that created "Chasing Molecules."

Let's start with the title. "Chasing Molecules" is a metaphor for what the author had to do to gather all the information and understanding that underpins this book. Grossman had to "chase" molecules around the world to elucidate their real migration paths, mechanisms of action, and global reach. She spent 18 months in pursuit of this knowledge. With "boots on the ground" experience, her efforts have provided a rich, concise resource for anyone seeking to obtain a global perspective on chemicals in our biosphere.

Likewise, some of the chapter titles are a result of the information learned about how molecules are transported and migrate. For example, swimmers migrate via water-based mechanisms; hoppers can move between a gas, liquid, and particle phase so they "hop" between phases and their associated mechanisms of transport; and fliers obviously migrate via air currents. Hence the chapter titled "Swimmers, Hoppers, and Fliers."

A series of questions seems to have driven the author: Why are scientists finding these chemicals of concern everywhere in the world? Why do these types of chemicals turn up in people and even newborn infants? Why do these chemicals migrate and why do they enter the food chain? But a more interesting question raised by Grossman is, why are we using these materials? Such questions lead to the real message of the book and are what makes it different from all the negatively focused books of the past. The emphasis here is how we can do a better job of protecting human health and the environment from hazardous and toxic chemicals.

To address the questions, Grossman has done a good job throughout the text of weaving in the concepts and perspectives of green chemistry. Green chemistry is the design of chemical products and processes that reduce or eliminate the use and/or generation of hazardous substances. What the author has done is add to the weight of evidence that supports the notion that the planet cannot meet the needs of an expanding population and increasing standards of living by a linear extension of existing technology. Given that fact, how do we make the transition to chemistry that is sustainable? The key is found in the 12 principles of green chemistry as crafted by John C. Warner and Paul T. Anastas in their seminal work, "Green Chemistry, Theory and Practice," published in 1998. 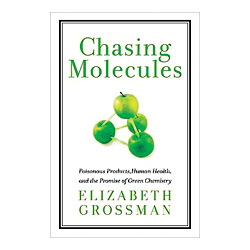 Grossman seems to have been able to get her mind around the role of green chemistry in moving us beyond a risk-based approach to chemical management. Historically, unless a chemical was considered a pharmaceutical, it was assumed that human exposure outside of the manufacturing facility was not a concern. Risk is a function of exposure multiplied by hazard and is traditionally managed in the industrial environment by the use of protective equipment along with the requisite record keeping, reporting, and training. Adverse health effects due to chemical exposures can and do occur. There also is the matter of fines and penalties from accidents and releases of hazardous chemicals.

It is interesting that Grossman uses a quote from Anastas and Warner: "In virtually every aspect in society, it has long been acknowledged that preventing a problem is superior to trying to solve it once it has been created." Clearly, "Chasing Molecules" is the latest book to paint a compelling picture that we have created problems of global proportions—problems that are serious, growing, and require urgent action to correct. At the same time, she tells us there is a rational path forward in the form of green chemistry.

Grossman also tackles the revolution taking place in mechanistic toxicology. Historically, the idea that the "dose makes the poison" was used to set many standards assuming a linear dose/response relationship. Modern toxicology has shown that old models of toxicology are not accurate. Growing evidence suggests that doses at extraordinarily low levels can result in significant adverse impacts and that the timing of such exposure can, in fact, be a key factor in multigenerational effects. Grossman also discusses the challenges of nanomaterials by recognizing that the properties of nanoscale-sized materials are different from macroscopic-scale materials due to surface area and physical size considerations.

The author posits that a toxic collection of petrochemical-derived materials has been changing the world's chemistry. She states that the entire chemistry of the planet, from the cellular level to the entire ecosystem, is now different from that at any other time in history. Grossman makes a compelling case that the transition to green chemistry could go a long way to replacing the existing cycle of putting persistent, pervasive, and toxic chemicals into our environment with terribly negative consequences.

Grossman echoes the concern of Warner, president and chief executive officer of Warner Babcock Institute for Green Chemistry, that among all the training of chemists who make and introduce new compounds and materials into the world, there is virtually no training at all in toxicology or environmental chemistry. Thus, traditionally trained chemists do not typically think about such criteria. Terry Collins, professor of chemistry and director of the Institute for Green Science at Carnegie Mellon University, refers to this state of affairs as the equivalent of giving car keys to people with no driver training. However, having recently attended the first Industrial Green Chemistry Workshop in India, I found it interesting and encouraging to see an emphasis on requirements for training in green chemistry in a country where pollution and health effects are now a high priority.

The book tackles a wide range of chemicals of concern, many of which are all too familiar. Anyone who wants a good overview of the global POP (persistent organic pollutant) scene would do well to read this work. It is well organized and crammed with data and information, much of which will help elevate the understanding of the challenges facing humanity.

Although Grossman is not a trained chemist, she has done a remarkable job of compiling a tremendous amount of technical information and translating it into language nonscientists can appreciate. Each page is rich with detail and data along with ideas on how to move forward, including the application of green chemistry.

What I like about Grossman's approach is that she not only reports the negative impacts or concerns, but also poses key questions about future initiatives related to green chemistry and sustainability. She ties in global warming by addressing the melting of glaciers and the associated release of contaminants such as DDT as the explanation for why DDT levels in penguins have not dropped. She asks why these substances were getting into our oceans and atmosphere in the first place and then delivers a compelling narrative to explain prevailing logic. She acknowledges that there are scientists who are as enthusiastic about explaining as there are people eager to ask.

My one main criticism of the book is that it does not address the vitally important role chemists must play in communicating our science in the future. Grossman states that "an important thing to know about the scientific detective work of monitoring and measuring pollutants is that generally you will only find what you set out to look for." I think she misses an important aspect of discovery with this observation, and that is: The most compelling discoveries often result from finding something you are not looking for and asking, "What is this?"

Grossman hits home with her statement that, now, well into the first decade of the 21st century, the full costs of our hydrocarbon society are becoming painfully apparent. She makes the point that more than 30,000 chemicals are in large-scale use in the U.S. and Canada and about 400 are recognized as persistent and bioaccumulative. Of those 30,000 chemicals, Warner would say that maybe 10% are known to be safe and perhaps another 25% can be relatively easily replaced with the knowledge we have today of green chemistry. That leaves 65% for which we have no data and no idea how to deal with. Here lies the golden opportunity for young scientists and engineers entering the field.

Grossman concludes by asking, "Can green chemistry gain the momentum it needs to effectively and substantively improve the prospects for human health and the environment?" I would add that in the eyes of nature, our current business models are not sustainable. Logic would then suggest we must do things differently in the future. The creation of new chemicals and materials built from the ground up using the principles of green chemistry is the key to a sustainable future for humankind.

People
25 years of green chemistry
Environment
Sponsored content: Pushing toward sustainability
Environment
Strategy Offered For Choosing ‘Safer’ Chemicals
Share X
To send an e-mail to multiple recipients, separate e-mail addresses with a comma, semicolon, or both.
Title: The Promise Of Green Chemistry
Author: Porter Robert Peoples
Chemical & Engineering News will not share your email address with any other person or company.