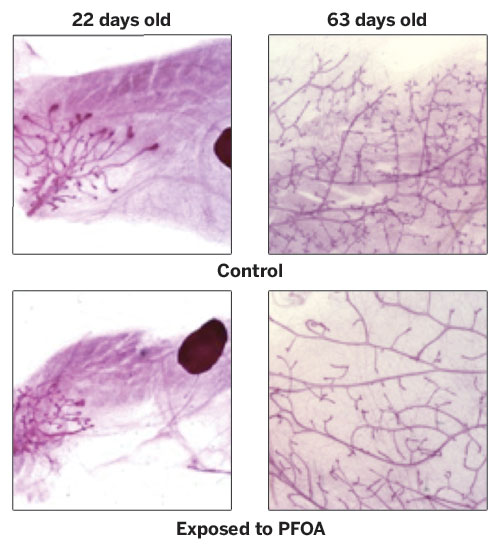 Evaluating chemicals for breast cancer risk should focus more on identifying critical disease pathways and high-throughput screening of compounds and less on traditional toxicology tests on adult animals, according to an expert panel.

The panel was convened as part of the Breast Cancer & Chemicals Policy Project (BCCPP), which was funded by the California Breast Cancer Research Program. One goal of the project was to develop a toxicity testing approach to identify chemicals that contribute to breast cancer. Another was to recommend ways to close gaps in toxicological methods and scientific knowledge related to identifying chemicals involved in breast cancer.

One in eight women develops breast cancer in her lifetime, and the disease is the second leading cause of death in adult women, said Sarah Janssen in a presentation at the February meeting of the American Association for the Advancement of Science. Janssen is one of the directors of BCCPP and a staff scientist at the Natural Resources Defense Council. More than 70% of breast cancer cases appear to be rooted in lifestyle or environmental causes, rather than genetics, she added, and more than 200 chemicals are known either to alter or to cause tumor formation in rodent breast tissue.

One problem with existing testing protocols is that they tend to involve dosing adult, nonpregnant animals, said Suzanne E. Fenton, a BCCPP panelist and a reproductive endocrinologist at the National Institute of Environmental Health Sciences. Fenton has looked at the effects of environmental chemicals on mammary gland development in the offspring of pregnant or nursing rodents exposed to compounds such as the surfactant perfluorooctanoic acid. The female progeny of the exposed mothers show delayed formation and branching of milk ducts in their mammary glands (Reprod. Toxicol. 2009, 27, 289).

Although the connection of these effects to breast cancer is unclear, Fenton said that research in this area points to a need for the use of toxicological tests that evaluate the effects of chemicals during critical periods of breast tissue development—specifically during gestation, puberty, pregnancy, and lactation. Evidence also suggests that at least some breast cancers involve a two-hit mechanism, with early exposure to certain chemicals making breast tissue more susceptible to carcinogens down the road.

Consequently, the BCCPP panel is recommending that chemicals be evaluated for their effects on mammary gland development and maturation. This would be in addition to evaluating chemicals for general carcinogenic mechanisms, such as gene mutations or DNA damage, and for endocrine disruption, which can promote breast cell division. “We may not know if a chemical causes breast cancer, but we can know if it affects some of the critical processes” that are likely to be involved in the disease, said Lauren Zeise, another BCCPP panelist and chief of reproductive and cancer hazard assessment at the California Environmental Protection Agency.

BCCPP’s panel is also recommending that toxicological testing of chemicals be prioritized based on hazard indicators, such as structural similarities to known breast carcinogens or physical/chemical properties that indicate a chemical could accumulate in the body. Another consideration should be exposure potential, which can be evaluated in biomonitoring studies, for example, or from data on chemical production volumes, according to the panel.

The group is not, however, recommending particular toxicological tests, Zeise said. Although it could identify existing validated tests to cover most of the necessary areas, cost and throughput would need to be considered for different situations. The panel also wants to leave the door open to emerging technologies, especially high-throughput screening methods that will be essential if thousands or tens of thousands of chemicals need to be tested (C&EN, June 22, 2009, page 30).

“We need to move away from the blunt instrument of whole-animal tests, where one chemical is tested over several years,” Berkeley’s Schwarzman said. “The backlog of chemicals to be tested is too big for that.”

Some high-throughput methods are being used in a partnership between the National Toxicology Program (NTP), the National Institutes of Health Chemical Genomics Center, and the Environmental Protection Agency’s National Center for Computational Toxicology, said Raymond Tice, chief of NTP’s Biomolecular Screening Branch. The project involves screening several thousands of chemicals selected by NTP and EPA with automated assays set up at the Chemical Genomics Center to flag, for example, endocrine disruptors that interact with the estrogen receptor.

Testing chemicals for their ability to interact with such receptors is an initial strategy, Tice said. Next in line might be screening for activation of various stress response pathways, such as those that respond to DNA damage. But one of the challenges with high-throughput screens, he said, is that “we don’t yet know all the pathways involved in a specific disease. No one does.”

Tice also noted that high-throughput screens don’t include the ability to metabolize compounds into potentially more reactive forms. And a screening hit doesn’t necessarily translate easily into a disease hit. In any toxicological evaluation, the goal would be to use high-throughput screens to flag chemicals of interest, then other assays would have to be run to narrow in on the exact effects, Tice said. To round out their efforts, Tice and colleagues are working to correlate the results of their in vitro screens with data from EPA’s Endocrine Disruptor Screening Program (C&EN, Sept. 14, 2009, page 25).

Ultimately, those working for BCCPP hope that their work will inform a broader approach to toxicological testing for diseases beyond breast cancer. Chemicals will need to be assessed across a variety of diseases through a battery of assays and considered, not just in isolation, but in the context of all other chemicals to which people are exposed, Zeise said.