A Chemical News Blunder, Powering Up With Cotton 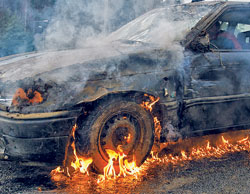 Watchers of the “Tonight Show”—especially the segment called “Headlines”—know that there are a lot of unintentionally funny, and sometimes worrisome, mistakes published in print media. Talk-show host Jay Leno encourages viewers and fans to send in error-laden clippings that he then uses to get a few chuckles out of his audience.

Recently, Newscripts received a newspaper clipping from reader David M. Manuta that could elicit both laughs and sad headshakes from our “audience”: hawk-eyed chemists who will recognize the molecular mistake immediately.

In its Feb. 27 issue, the Columbus Dispatch ran an article, “Washing Is Rx For Healthy Cars In Winter.” The short piece, from the syndicate Content That Works, set out to warn Ohio readers of various hazards that can damage their vehicles’ paint jobs and finishes. In particular, the article says, road deicers are most destructive. “SODIUM MAGNESIUM, used instead of sodium chloride in some locations, can be corrosive … on a vehicle’s undercarriage,” the piece reads.

Unsure of what type of fantastical compound “sodium magnesium” might be, Manuta wrote to Content That Works to point out the problem. “Based on the underlying chemistry,” he wrote, “ ‘sodium magnesium’ would act as a wonderful deicer, as long as no one is concerned about the ensuing explosion and/or fire!” Manuta, president of Manuta Chemical Consulting, in Ohio, has investigated “too many incidents where reactive metals displace hydrogen from water” and cause explosions, he tells Newscripts.

He postulates that the article probably meant to describe magnesium chloride, a salt that lowers the freezing point of water more than sodium chloride does. This phenomenon was discussed in detail in a 2008 Newscripts column (C&EN, March 31, 2008, page 56). Either way, Manuta says, “there could be potentially devastating consequences for someone tossing pellets containing ‘sodium magnesium’ on an ice or snow-covered surface.” So, readers, don’t try this at home. 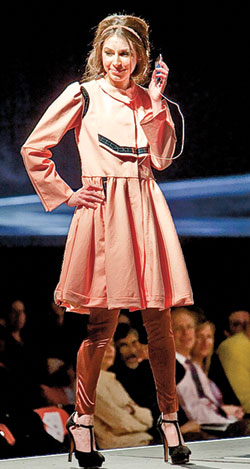 Another bit of science that Newscripts readers might get a charge out of comes from work being done at Cornell University. Juan P. Hinestroza, director of the Textiles Nanotechnology Laboratory there, has collaborated with researchers at the Italian Universities of Bologna and Cagliari to develop WEARABLE ELECTRONICS. The team has produced electrically conductive, flexible threads for garments by coating cotton fibers with hybrid nanoparticles composed of metal, metal oxides, and polymers, according to Hinestroza.

The utility of the new nanotechnology was recently demonstrated by Hinestroza’s student Abbey Liebman, who designed a solar-powered dress for a March 13 fashion show held at Cornell. Liebman used the nanoparticle-coated fibers to complete the electrical circuit between solar cells woven into the front of the dress and a USB charger sewn into its waist; wearers can make use of the connection to power a smartphone or MP3 player.

Although he can’t give Newscripts many details about the fibers’ construction because patents are pending, Hinestroza says the threads “feel like cotton, drape like cotton, and can be processed as any other cotton fiber.” The particles are arranged in a specific pattern to distribute the stress on the fiber when it is bent or twisted, he adds, and the final coating is only a few tens of nanometers thick.

Several companies have already shown interest in the technology for “applications that we never could have anticipated,” Hinestroza says. Proposals have been made to incoporate the threads in garments that contain flexible electromagnetic shields and health-monitoring devices.