[+]Enlarge
Credit: Oak Ridge National Laboratory
This platinum-based lean-trap catalyst may one day be replaced with one based on perovskite oxides. 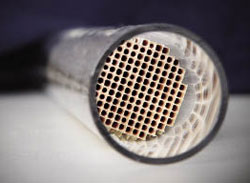 Credit: Oak Ridge National Laboratory
This platinum-based lean-trap catalyst may one day be replaced with one based on perovskite oxides.

An improvement to catalysts found in fuel-efficient diesel engines could make this clean technology less expensive.

Wei Li, a project manager at General Motors Global Research & Development, in Warren, Mich., and his colleagues replaced platinum in catalysts used to clean the exhaust gas from diesel engines with a mixture of palladium, which is four to five times cheaper than platinum, and perovskite oxides (Science 2010, 327, 1624).

“Platinum is a lot more expensive than everything else in the converter,” Wei says. He adds that his team is hoping to validate the new catalysts over the next few years, but “there is still a long way to go before the technology is put into new vehicles.”

James E. Parks II, a group leader at Oak Ridge National Laboratory specializing in emissions and catalysis, says in a commentary about the work that the perovskite catalysts being developed by Wei and colleagues are “encouraging.” Even though the new catalysts currently employ palladium, the perovskite oxides may eventually “help reduce or even eliminate the need for expensive and scarce platinum group metals in emission-control catalysts,” Parks notes.

Diesel vehicles with so-called lean-burn technology primarily operate in an excess of oxygen so that all the fuel is consumed. The lean-burn engine’s exhaust consequently contains oxygen, which prevents the use of common catalytic converters for cleaning up other components of the exhaust, such as nitrogen oxides. To deal with these pollutants as well as carbon monoxide and soot, engineers have developed two emissions control technologies, one that employs urea and a second called the lean NOx trap. The new catalyst was developed for the lean NOx trap, which currently uses one based on platinum.

All platinum group metals, including palladium, would ideally be avoided to reduce costs. But without palladium, the perovskite oxide catalyst was “prone to deactivation by sulfur, a contaminant present in fuel,” Parks says. “The oxidation activity of the catalysts improved in the presence of sulfur by adding palladium,” which is still a rare metal, but a cheaper one, he says.

Pollution
Satellites can now see air pollution inequality within cities
Persistent Pollutants
Goodbye to some PFAS in food packaging
Pollution
Mercury makes it deep into marine trenches
Share X
To send an e-mail to multiple recipients, separate e-mail addresses with a comma, semicolon, or both.
Title: Curbing Diesel Engines' Cost
Author: Sarah Everts
Chemical & Engineering News will not share your email address with any other person or company.