To ensure kosher dietary standards, rabbis need to account for every molecule

ESSENCES
[+]Enlarge
Credit: Mitch Jacoby/C&EN
To be certified kosher, rabbis must know the source of each compound used to prepare the flavoring. 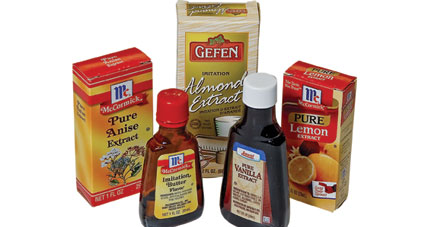 Credit: Mitch Jacoby/C&EN
To be certified kosher, rabbis must know the source of each compound used to prepare the flavoring.

Connoisseurs of Coca-Cola and other soft drinks sweetened with high- fructose corn syrup have been scouring grocery stores in recent weeks. They’re searching for the rare yellow-capped versions of these sodas designated kosher for Passover. During the Jewish holiday, which begins this week, consumption of certain grains, including corn, is prohibited by kosher dietary laws. So once per year, soft-drink makers substitute the corn-derived sweetener with pricier sucrose. This creates beverages that are closer to the original formulations, and according to soda mavens, the sucrose sweetener is less cloying than its corny cousin.

Although special batches of soda may seem like a supermarket oddity, the truth is that kosher foods take up a lot of space on grocery store shelves. Roger Horowitz, a food historian and author of “Putting Meat on the American Table: Taste, Technology, Transformation,” estimates that 40–50% of food items in the supermarket are kosher. That is, they meet the strict dietary guidelines set by Jewish law. Basically, a kosher diet excludes certain animals, such as swine and shellfish, and kosher meat must be slaughtered in a particular way. When keeping kosher, it’s forbidden to mix meat and dairy products, and kosher grape products, such as wine and grape juice, need to be made by Jews.

Thousands of years ago, when the kosher laws were written, such distinctions were easy to make. With modern-day foodstuffs, however, that’s not the case. Even the vanishingly small amounts of chemical additives and flavorings in foods must meet strict guidelines in order for them to be certified kosher.

“It was very difficult before the late-20th century for observant Jews to go into a supermarket and buy something just like everybody else,” says Horowitz, who is currently writing a book on kosher food science during his tenure as a fellow at the Chemical Heritage Foundation. He estimates that in 1970 there were, perhaps, 3,000 kosher foodstuffs available on supermarket shelves. “Many of these products were things like salt and pickles—things that were kosher the way they were made. There weren’t any changes involved,” he says.

Things gradually got better so that by 1985 there were 10,000 kosher products on the market, and by the early part of the new millennium the number had ballooned to more than 70,000.

“Coca-Cola was probably the first iconic food product to become certified kosher,” Horowitz says. Back in the 1930s, Coca-Cola approached Atlanta-area Rabbi Tobias Geffen to see about the soda becoming officially kosher. To do so, Geffen needed to know everything that’s in Coke, Horowitz says, including the famous secret ingredient. No matter how proprietary the knowledge, rabbis need to know everything that goes into a product in order to certify it. “The rabbis then promise that they won’t tell anybody,” he adds.

In the process of certifying Coke as kosher, Geffen discovered a problem: The chemical glycerin, also known as glycerol, is used as a flavor dispersant in the cola.

Glycerin is often derived from rendered animal fat, so its source can be nonkosher: a pig or even a cow that was not kosher-slaughtered. So, Horowitz explains, the question for the rabbis at the time became: Does it matter where the glycerin comes from? “In other words,” Horowitz says, “if it’s no longer a pig, if it’s a chemical extracted from the pig and the chemical itself bore no resemblance to the pig that it came from, can it be kosher?”

Geffen determined that the source does matter. Glycerin that comes from a non­kosher source cannot be kosher.

This decision turned out to be something of a watershed, Horowitz notes. “There are a lot chemicals that go into food at insignificant levels or some chemicals that are involved in the making of food that aren’t contained in the final product,” such as the so-called release agents used to grease baking pans, he says.

“Suddenly you’re saying lots of chemicals that go into food have to be looked at. So it establishes some stringent precedents in kosher law,” Horowitz points out. “Rabbis have to become chemists to some degree,” he says. “They need to understand chemical composition, chemical origin, and chemical manufacturing. That’s a very sophisticated level of knowledge.”

Because you can’t make Coke without glycerin, the company turned to Procter & Gamble, which was using cottonseed oil to make Crisco at the time. P&G could also use cottonseed oil as a source for glycerin, which Coca-Cola then purchased to make kosher soda.

These days, kosher flavorings and chemical additives are far more commonplace. Tom Courtney, director of quality assurance for International Flavors & Fragrances, estimates that 65–75% of the flavorings the company manufactures for the North American market are kosher. “What continues to drive us is customer preference,” he says. The food companies that make up IFF’s customer base often require kosher-certified products.

Although it may only be identified as “natural and artificial flavors” on a nutrition label, an individual flavoring can be made of a dozen ingredients, and in some rare instances even as many as 100 compounds.

“When there are so many ingredients, obviously just ascertaining the knowledge of which ingredients are kosher and which are not kosher” is a massive undertaking, says Rabbi Don Yoel Levy, chief executive officer of OK Kosher Certification, in Brooklyn, N.Y. OK certifies 114,000 products, including more than 10,000 flavorings.

Additionally, notes Rabbi Yitzchak Hanoka, who is a rabbinic coordinator with OK, “the food manufacturing world is always looking to make something unique, something new and special, so we have to adapt to the climate in which we function.”

“There are a few flavor ingredients that are inherently not kosher,” notes Rabbi Yitzchak Gornish, a rabbinic coordinator and food scientist with OK. But 99% of flavorings can be kosher as long as they come from a kosher source. “That’s the challenge,” Gornish says.

Grape-based colorings and flavorings, such as cognac oils, for example, need to have been made by Jews in order to be considered kosher. Some people even take issue with tartaric acid, the sediment that forms in wine casks, Gornish says, insisting it come from kosher wine.

Ethanol, a popular solvent for flavorings, can also pose some interesting challenges for kosher certification. Because ethanol can be derived from a number of sources—wine, grains, and even milk—knowing its source becomes critical for the certifying rabbi. If the ethanol is derived from wine, it must be kosher wine in order for any flavoring processed with the ethanol to be considered kosher.

Levy recalls one flavor company in Southeast Asia that was getting all of its ethanol from New Zealand, where it was made from lactose in milk. All flavorings that the company prepared with ethanol had to be labeled as “dairy,” meaning that any food they were used in couldn’t be served with meat-based products. Ideally, a company would rather its flavor carry the “pareve” label, meaning it’s made without dairy, meat, or their derivatives and can be served with either meat or dairy foods.

Another challenge is ensuring that equipment that is shared between kosher and nonkosher flavorings is correctly sanitized between uses. A machine that was used to process animal-derived glycerin, for example, would need to be thoroughly cleaned before it could be used to process kosher, vegetable-derived glycerin, even though it’s the same molecule.

And what about that distinctive yellow-capped Coca-Cola? “Passover formulas are often made under special production with a rabbi present and under special conditions because there are many more sensitivities involved,” Hanoka says.

In fact, kosher certification agencies, such as OK, keep rabbis posted at food and flavor production sites around the world to ensure that kosher standards are kept during production. To certify the thousands of flavorings at IFF’s Dayton, N.J., facility, OK has two rabbis employed full-time there.

“As a historian of food, what amazes me is how prevalent kosher food is,” Horowitz says. In the U.S., observant Jews account for about 1 million people in a population of 300 million. “From a business standpoint this is a real puzzle,” he says. “How do you get these huge companies to invest in accommodating their food to a population that’s such a small minority?”

Horowitz suspects that it’s the strict requirements that actually broaden kosher food to other markets. Vegetarians and vegans can look for kosher certification to ensure that certain products, such as glycerin from animals, aren’t in their food. Likewise, Muslims, who also eschew pork products, can trust that anything labeled with kosher markings is pork-free. It’s being stringent for observant Jews, knowing the source of every molecule in a recipe, that allows other consumers to trust kosher certification, he says.

Pollution
Satellites can now see air pollution inequality within cities
Persistent Pollutants
Goodbye to some PFAS in food packaging
Pollution
Mercury makes it deep into marine trenches
Share X
To send an e-mail to multiple recipients, separate e-mail addresses with a comma, semicolon, or both.
Title: Favored Flavors
Author: Bethany Halford
Chemical & Engineering News will not share your email address with any other person or company.