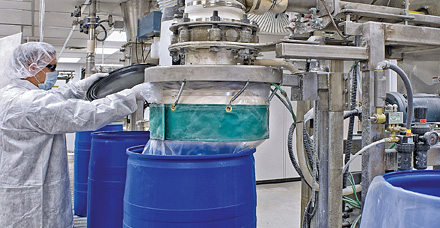 Following the passing of the well-known takeover titan at the age of 70, after complications from open-heart surgery (C&EN, Nov. 16, 2009, page 9), his wife, Ronnie F. Heyman, became ISP’s chair, Kumar says. ISP will continue to buy other companies, he assures C&EN. But from now on, the firm will do only small, friendly deals intended to boost its position as a niche supplier of specialty chemicals to customers in markets such as personal care, beverages, and pharmaceuticals.

Samuel Heyman was famous as an arbitrager who could make millions even if his takeover efforts failed. During the late 1980s, he launched buyout proposals for petrochemical giant Union Carbide and conglomerate BorgWarner. In 1999, he sought Dexter Corp. in an effort to gain control of that company’s ownership in the biotech supply firm Life Technologies. In 2003, he tried to wrest control of ailing specialty chemical maker Hercules.

Wayne, N.J.-based ISP was the one corporate asset Heyman succeeded in buying. He won control of the firm in a 1983 proxy battle for what was then known as GAF Chemicals.

Heyman withdrew from the daily management of ISP at about the same time that Kumar, a native of India who holds a mechanical engineering degree from the Indian Institute of Technology, Madras, joined as CEO in 1999. Heyman “gave us advice when we needed it,” Kumar recalls, “and was very much in charge of some big-picture issues, such as how much debt we carried.” In recent years, Heyman stopped keeping an office in Wayne, working instead from New York City.

Industry sources indicate that Heyman suffered financial setbacks during the recent economic downturn. However, Kumar says, Heyman’s family has no need to monetize ISP or other assets. “They are quite well-to-do,” he adds.

ISP is not for sale, Kumar insists. “But if a bona fide principal expressed a clear interest in us, it would be my duty to take it to the Heyman family,” he points out. Financial analysts contacted by C&EN say they aren’t aware of any offers to buy ISP.

Ownership of the firm is held in a family trust that includes Ronnie Heyman, her children, and her grandchildren. The family trust also owns ISP’s sister company, GAF Materials, a roofing materials maker. Because Ronnie Heyman has no interest now in continuing her husband’s takeover activities, ISP won’t be a springboard for such efforts, Kumar says.

Ronnie Heyman, who, like her late husband, is a lawyer, does meet with Kumar monthly to review operations. Major decisions, such as large capital expenditures, are subject to her approval. “Decision-making is very fast, as it was with Sam,” Kumar says. Two of Ronnie Heyman’s sons-in-law, David J. Millstone and David S. Winter, maintain a lively interest in ISP’s development. However, their daily focus is on an investment fund, Winmill Capital Partners, that they run together.

ISP At A Glance

Since Samuel Heyman died, no major changes have taken place at ISP, and it continues to operate as it has since Kumar, 60, left the helm of GAF Materials to take charge 11 years ago. As a niche player in businesses such as personal care ingredients, laundry additives, and pharmaceutical excipients, the company grows in four ways, Kumar says: through internal growth, opportunistic acquisitions, bolt-on acquisitions, and joint-development agreements with other firms.

Internal growth usually adds 4–5% annually to chemical sales, which were about $1.3 billion in 2009. Because of the recession, sales were down by nearly 20% compared with 2008, but profits were still strong, Kumar says.

A recent capital investment of about $35 million enabled ISP to build a pharmaceutical excipients plant at its Texas City, Texas, facility. The firm will now be able to supply customers with bulk quantities of its new high-purity crospovidone ingredient, which promotes tablet dissolution. Sold as Polyplasdone Ultra, the drug-delivery vehicle is made in a new process that excels at preserving peroxide-sensitive drugs, the firm says.

In fact, ISP has increased its focus on excipients for drugmakers. The company formed an alliance in October with Germany’s Coperion to develop hot-melt extrusion technology for solid-dosage-form drugs. The effort now under way links ISP’s know-how in polymers and disintegrants with Coperion’s expertise in designing and building hot-melt extrusion equipment. And to be close to a growing drug industry center, ISP is also expanding excipient capabilities at its R&D facilities in Hyderabad, India.

Internal growth at ISP is also driven through an annual R&D budget that Kumar sets at about $35 million. Most of it is devoted to customer-specific applications development.

Such development work, for instance, led to a butanediol-based adhesive, methyl vinyl ether-maleic anhydride copolymer, that ISP supplies to Colgate-Palmolive for its Total toothpaste, Kumar says. The adhesive bonds the gingivitis-fighting active ingredient, triclosan, to teeth and makes possible Colgate’s claim that the toothpaste provides 12-hour protection against gum disease.

But there is a limit to what ISP can do with its own R&D efforts. “When it comes to R&D, we are a small company with only 300 scientists, compared with DuPont and BASF, which have thousands of scientists on staff,” Kumar says. So the firm brings in new technology by purchasing small, often family-owned, businesses with good science.

About a year ago, ISP quietly bought Ionic Solutions, a small England-based supplier of ingredients for personal care, specialty water treatment, and paper coatings. The acquisition extends ISP’s chemistry range beyond its traditional butanediol-based derivatives to acrylate chemistry. Kumar vows to stay away from high-volume acrylic businesses in paint and water treatment and stick to niche applications. The firm is now looking for a new production site in the U.K., he adds.

Another notable deal is ISP’s 2007 purchase of cosmetic ingredient developer Vincience. The family-owned French firm brought ISP a portfolio of peptides and botanicals for skin care. “With private owners, it is important that the business grow after the deal is done, that their employees be taken care of, and that their ideas be nourished and be successful,” Kumar explains. Claude Dal Farra, the son of Vincience’s former owner, is still with ISP.

In giving family owners such assurances, ISP often pays what Kumar describes as an attractive price for assets, which in Vincience’s case brought with it more than 25 research scientists dedicated to clinical evaluations of ingredients and skin biology. Vincience’s technology is strong enough, Kumar says, that he has given Dal Farra, its research leader, a “blank check” to develop new products. “He brought in such good science, it would be suicidal not to fund it,” Kumar says.

And with the Vincience acquisition, ISP has also significantly boosted its personal care prospects, notes Gillian Morris, director of chemicals and materials at consulting and market research firm Kline & Co. “Vincience provides a platform to build out a successful skin care business and take advantage of higher growth in this sector,” she says.

Not every acquisition works out as planned, Kumar acknowledges. The 2006 acquisition of Progiven gave ISP a portfolio of industrial biocides made in a plant in France. But ISP mothballed the plant during the economic slowdown and moved production to Germany.

Although ISP doesn’t have the heft of BASF or DuPont, it does have a portfolio that crosses a wide range of industries and chemistries, Kumar points out. “In every category we play in, we are quite strong. In total, we are small. We survive because we are specialists,” he says.