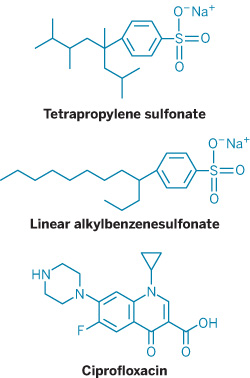 To reduce the impact of drugs on the environment once they pass through our bodies and down the drain, medicinal chemists should consider benign-by-design strategies when developing drugs, says Klaus Kümmerer, a chemist at the University of Freiburg Medical Center, in Germany.

Although there is not yet an ecotoxicity equivalent to Lipinski’s Rule of Five, which specifies molecular features that tend to make a drug orally active, researchers are beginning to tabulate some of the characteristics in a molecule’s architecture that can make it less environmentally persistent.

For example, Kümmerer suggests that medicinal chemists add ester bonds where possible because they help with biodegradability. Likewise, medicinal chemists should consider avoiding quaternary carbons because they hinder biodegradability by microorganisms, he says. Getting halogens out of drugs is also on the benign-by-design wish list. Halogens are often included in drugs to “increase bioavailability, but this also makes them environmentally persistent,” says Joakim Larsson, an environmental researcher at the University of Gothenburg, in Sweden.

Consider ciproflaxin, one of the world’s most widely used antibiotics and a drug consistently found in the environment. The molecule has a fluorine-carbon bond that prevents its degradation but also permits it to be stable in tropical environments, where it is most needed. Other drugs that are fluorinated to maintain stability include the anticancer agents gemcitabine and cytarabine, Kümmerer says.

“Size also matters,” Kümmerer notes. If a molecule is too large to be taken up by bacteria that break down pharmaceuticals in the environment, then the drug cannot be degraded.

Sometimes during synthesis, medicinal chemists add moieties such as blocking groups, which could end up in the final structure but are not required for activity. These might be removed if they are found to be problematic for the environment, he suggests.

Berkeley W. (Buzz) Cue Jr., formerly of Pfizer and now a consultant for the pharmaceutical industry, says that one way to reduce a drug’s impact on the environment is to increase its oral availability so it doesn’t pass so easily through the body. Some 80–85% of drugs have poor oral availability, he says. Lipitor, for example, is only 12% bioavailable. “That means that 88% of what is ingested doesn’t get to the site of action. If you doubled bioavailability, you’d halve the level of the drug entering the environment,” Cue explains.

Another strategy is to tweak drug stability. “Ideally, drugs would be designed that don’t degrade when you don’t want them to degrade—such as in the packet or in the patient—but do degrade when you want them to degrade, which is in the environment,” Cue says. “Excipients or additives could be designed that help drugs remain stable until they reached the environment.”

For those who advocate a benign-by-design approach to drug development, one of the biggest roadblocks is, in fact, the issue of drug stability, Cue says. Medicinal chemists learn to design drugs that are stable: specifically, drugs that don’t degrade in sunlight, don’t get easily oxidized in air, or aren’t thermally labile. These are precisely some of the same mechanisms by which nature reduces complex molecules to their mineral form. By engineering stability into pharmaceuticals, many chemists have engineered out simple ways to develop drugs that are nonpersistent, Kümmerer says.

He challenges the idea that “the stability of chemicals is an indispensable property for their application,” estimating that 25% of drugs currently available on the market are biodegradable. “If we’ve done it already by chance, what will happen if we do it in a targeted way?” he asks.

Some drugs that are more benign to the environment are moving through the pharma pipeline. For example, before Schering-Plough merged with Merck, it was planning to carry out animal and human drug trials on a birth control pill that contains a more biodegradable form of progesterone. The status of this drug could not be confirmed by C&EN’s press time. In addition, glufosfamide (β-D-glucosyl-isophosphoramide mustard, or β-D-Glc-IPM), a biodegradable anticancer drug, is being developed as an alternative to ifosfamide, which is not biodegradable. β-D-Glc-IPM completed Phase III trials sponsored by Redwood City, Calif.-based Threshold Pharmaceuticals, but the results were not statistically significant. The lead has now been licensed to Princeton, N.J.-based Eleison Pharmaceuticals.

The chemical industry has also set precedents in which tweaks to the structure of a molecule have not reduced its functionality but have improved its environmental profile, Kümmerer adds. For example, in the 1950s, tetrapropylene sulfonate (TPS) caused intense frothing in sewage plants. Chemists tweaked TPS, transforming it into linear alkylbenzenesulfonates (LASs) that could degrade more easily. Although LASs are actually more toxic to aquatic organisms than TPS, they disappear quickly enough that they have become broadly accepted.

Persistent Pollutants
Goodbye to some PFAS in food packaging
Pollution
Satellites can now see air pollution inequality within cities
Pollution
Mercury makes it deep into marine trenches
Share X
To send an e-mail to multiple recipients, separate e-mail addresses with a comma, semicolon, or both.
Title: Greener Drugs: Benign-By-Design Strategies
Author: Sarah Everts
Chemical & Engineering News will not share your email address with any other person or company.