Now more than ever, a Haitian ACS Scholar's family inspires him to achieve success in chemistry 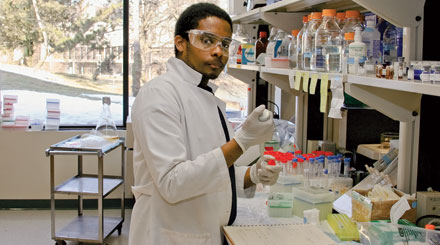 His hands folded, Kedy Edme sits at a metal table on the top floor of a modern student center. Natural light pours in, but it’s breezy out, so over his navy polo, he wears a zippered hoodie. It’s emblazoned with the black-and-gold logo of the University of Maryland, Baltimore County, where Edme, an American Chemical Society Scholar, is a junior. “I’ve always known I wanted to do chemistry,” he says, smiling. His family has supported that dream through good times and bad. “My family has always played a role in everything I do. I owe a lot to them,” he says.

The youngest of four children, Edme grew up in Haiti. His mother, a chemical engineer, and his father founded a school called Cours Prives Edme, in Port-au-Prince. After elementary school let out for the day, he’d clamber upstairs and sit in the back of his mother’s classroom, where she taught Advanced Placement chemistry lectures and labs. “I didn’t understand any of it at the time,” he recalls. But being surrounded by beakers and transformations was probably what planted the idea of becoming a chemist in his mind.

Edme graduated from his parents’ school at 17 and then stayed on for a year as a teaching assistant in chemistry, biology, and math. In the fall of 2007, he moved to Virginia to live with his older brother and his brother’s wife. He enrolled at Piedmont Virginia Community College and also took classes at the University of Virginia. At Piedmont, Edme found a mentor in chemistry professor Barbara L. Heyl. “Dr. Heyl is one of the people who contributed the most to my success,” he says. “She was very helpful when I first came to Virginia. I’d left home; it was a whole new experience,” he says.

Midway through Edme’s freshman year, Heyl told him and a classmate about the ACS Scholars Program and encouraged them to apply. When Edme learned he’d won a scholarship, “that was a big deal,” he says. Edme and his classmate were the only two community college students nationwide to become ACS Scholars in 2008.

Soon after hearing the good news from ACS, Edme left for a summer internship with structural biologist Michael F. Summers of UMBC, where he learned about protein and nucleic acid purification. “That was my very first summer research, and it was awesome,” Edme says, grinning.

After returning to Piedmont for his sophomore year, Edme started preparing applications to transfer to another college after finishing his associate’s degree. Choosing a four-year college was tough, but he ultimately ended up at UMBC, where in addition to being an ACS Scholar, he also has financial aid from the National Institutes of Health Minority Access to Research Careers program.

Before he enrolled at UMBC, it was off to Cornell University for summer research, this time with bioorganic chemist Hening Lin. There, Edme applied the biochemical skills he’d picked up in Summers’ lab while learning about histone deacetylation. He presented a poster about his project last November at the Annual Biomedical Research Conference for Minority Students in Phoenix and won a poster presentation award.

Edme has only been at UMBC for a semester and a half, but he’s already a fixture in the chemistry building, where he continues to do research in the Summers lab on top of a full junior-year course load.

But the earthquake that struck Haiti in January is very much on his mind. After visiting Haiti for Christmas, he came back to campus just a week before the quake hit. With the exception of his brother and sister-in-law, his entire family is still on the island. Luckily, none of them were hurt. “We were fortunate—we didn’t lose the house or the school. I would say we weren’t directly affected. But everyone lost a least a friend,” he says, more quietly. “I did lose friends.”

In the aftermath of the tragedy, “being here is tough because you don’t know what’s going on; communication was down for a while,” he says. “You’re losing your focus because that’s all you’re thinking about.” But “being able to continue with learning and everything else in my life here is a direct result of my family’s support,” he says. If they can go on amid disaster, he can, too.

Now Edme is looking to the future. This summer, he will work at inorganic chemist Harry B. Gray’s lab at California Institute of Technology. He plans to earn a Ph.D. in chemistry so he can teach and conduct research at a university, and Caltech is one of his top choices.

And he’s planning a trip to his first ACS national meeting for 2011. “ACS has helped cover my tuition but also has given me support and opportunities to learn more about research and research careers,” he says. “I’m very thankful.”

Please contact Kathy Fleming in the ACS Development Office for more information on contributing to this important program. She can be reached at (800) 227-5558 ext. 6210 or by e-mail at k_fleming@acs.org.

Career Tips
Zoomed out? Here’s how to manage expectations
Careers
Career Ladder: Joyce Nethery
Postdocs
Postdocs ponder missed opportunities caused by the coronavirus pandemic
Share X
To send an e-mail to multiple recipients, separate e-mail addresses with a comma, semicolon, or both.
Title: Kedy Edme
Author: Carmen Drahl
Chemical & Engineering News will not share your email address with any other person or company.