CLEANED UP
[+]Enlarge
Credit: Arvia
Paper plant wastewater before (left) and after treatment with Nyex. 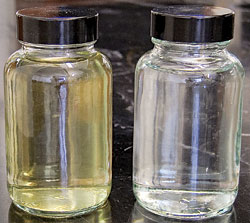 Credit: Arvia
Paper plant wastewater before (left) and after treatment with Nyex.

Activated carbon has long been used to adsorb tricky water pollutants. Carbon treatment is both cheap and effective, but it has one major downside: The material requires disposal once it has done the job. Now, Arvia Technology, a start-up from the University of Manchester's school of chemical engineering, has put a new spin on using carbon to clean water.

Arvia's technology is based on what it calls its Nyex adsorption material. Instead of light, fluffy activated carbon, Nyex is graphite-based and reusable. Martin Keighley, Arvia's chief executive officer, tells C&EN that the company is now busily testing Nyex in industries, such as paper manufacturing, that need to remove recalcitrant organic pollutants.

The Nyex particles are denser than activated carbon. They also adsorb pollutants faster, Keighley says, because their pores are only on the surface. Arvia takes advantage of these two traits by putting Nyex in a fluidized bed reactor. A stream of air bubbles is fed into the reactor, causing the carbon to mix with wastewater and absorb organic pollutants. When the particles have trapped the pollutants, they sink to the bottom of the bed.

The secret to reusing Nyex is that the graphite particles are electrically conducting. "We can pass a low-voltage electric current through the bed, and we get electrochemical oxidation of organics on the particles," Keighley explains. Arvia boasts that the Nyex system uses little energy, does not require chemical additives, and does not leave behind concentrated solid or liquid waste streams.

The company recently wrapped up its first trial, at a U.K. recycled paper plant that wished to reuse its water but found other solutions too expensive. Arvia had to contend with the plant's two difficult wastewater dilemmas. Resins from the original paper turned the water a yellow color that persisted even after it was treated. And the treated yellow water has too many negatively charged particles. If the plant tried to reuse the water, it would be forced to add more process chemicals.

The outcome of the trial was promising, Keighley says. "We were able to remove all color, reduce chemical oxygen demand by 30%, and reduce cationic demand by 90%." He estimates that Nyex costs a couple of cents per cubic meter of treated water—a significant savings compared with purchasing fresh water, which costs 50 to 60 cents per cubic meter.

Pollution
Satellites can now see air pollution inequality within cities
Persistent Pollutants
Goodbye to some PFAS in food packaging
Pollution
Mercury makes it deep into marine trenches
Share X
To send an e-mail to multiple recipients, separate e-mail addresses with a comma, semicolon, or both.
Title: British Start-Up Arvia Tests Its Technology At A Recycled-Paper Mill
Author: Melody Voith
Chemical & Engineering News will not share your email address with any other person or company.