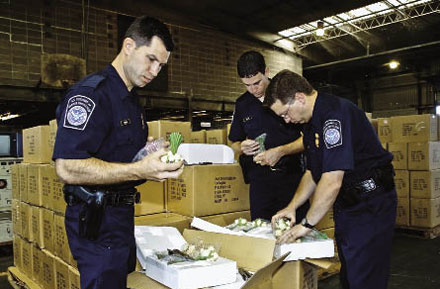 Legislation to strengthen food safety regulations and give the Food & Drug Administration new authorities to help keep the food supply safe is slowly making its way through Congress. Getting such a bill passed, however, is proving to be quite a challenge.

The House of Representatives passed the Food Safety Enhancement Act (H.R. 2749) last July with strong bipartisan support (C&EN, July 6, 2009, page 20). But the Senate has been much slower to act.

The Senate version of the bill (S. 510) passed the Health, Education, Labor & Pensions Committee in November 2009 (C&EN, Nov. 23, 2009, page 26), but it has yet to come up for a vote on the Senate floor. Food safety has taken a backseat to health care and financial services reform.

Many people expected the Senate to vote on the legislation before Memorial Day, but an amendment that would ban or restrict the use of the plastics chemical bisphenol A (BPA) in food and beverage containers, which Sen. Dianne Feinstein (D-Calif.) proposed last month, could kill senators’ support for the bill and delay that vote.

Several industry groups, including the U.S. Chamber of Commerce and the Grocery Manufacturers Association, have threatened to pull their support for S. 510 if the BPA amendment is added. The groups worry that such an amendment is premature. FDA is reviewing the safety of BPA after it announced in January that it had “some concern” about potential reproductive and developmental effects in infants and children (C&EN, Jan. 25, page 8).

Industry is asking lawmakers to wait until FDA finishes its review before imposing any ban or phaseout of BPA, noting that if problems are found, the industry will act with or without legislation. “If the FDA or other competent regulatory authorities conclude that BPA poses a risk to our consumers, our industries will move quickly to address these risks,” a coalition of industry groups wrote in a letter last month to leaders of the Senate Health, Education, Labor & Pensions Committee.

As the Senate dabbles with the food safety bill, some members of the House Energy & Commerce Subcommittee on Oversight & Investigations are worried that H.R. 2749 does not address problems raised by a report released in September 2009 by the Government Accountability Office on the safety of imported foods and another published last month by the Department of Health & Human Services Office of the Inspector General (OIG) on inspections of domestic food facilities.

The GAO report revealed that FDA physically examines only about 1% of imported food. In 2008, FDA inspected just 153 of an estimated 189,000 foreign FDA-registered food facilities, GAO found. Similarly, OIG found that FDA’s inspection of domestic food is inadequate. At a hearing held by the House oversight committee earlier this month, representatives questioned FDA officials and the report authors about whether these problems would be fixed by the pending legislation.

Many of the problems would be fixed, but not all of them, lawmakers heard. For example, to better target its screening efforts, FDA is developing a risk-based computer system called Predictive Risk-Based Evaluation for Dynamic Import Compliance Targeting (PREDICT), Lisa Shames, director of Natural Resources & Environment at GAO, testified. The system is now used at ports in New York City and Los Angeles, but its nationwide deployment has been “put on hold indefinitely because of technical problems, including server crashes and overloads,” she said.

“This is not the first time that we’ve heard of the failure of FDA to keep pace with changes in technology,” Rep. Michael C. Burgess (R-Texas), ranking member of the oversight subcommittee, remarked. “FDA remains technologically in the 1990s.”

FDA Deputy Commissioner for Foods Michael R. Taylor told lawmakers that the agency is investing in its information technology infrastructure and expects the PREDICT system to roll out nationwide later this year.

Technology problems are also preventing FDA from collaborating more fully with other federal agencies responsible for overseeing imported foods, Shames noted. Those agencies include the Department of Homeland Security’s Customs & Border Protection (CBP) and the Department of Agriculture’s Food Safety & Inspection Service. In some cases, such as with CBP, technology problems exist on both sides, exacerbating the challenges of communication, Shames noted.

In its report, GAO suggested that the agencies assign a unique identification number to each foreign facility that exports food to the U.S. Such firms often have multiple identifiers, making it difficult for FDA to track imported food. The pending food safety legislation does not address these technology-related problems. Even domestically, FDA’s database of food facilities is prone to problems, lawmakers pointed out.

The OIG report, which looked at FDA’s inspections of domestic food facilities, recommended that FDA require facilities to register on a more routine basis, testified Jodi Nudelman, OIG’s regional inspector general for evaluation and inspections. “That would allow facilities to provide updated information” and improve the accuracy of FDA’s database, she said.

OIG identified several other weaknesses with FDA inspections in its report. For instance, it found that many food facilities went for five or more years without an FDA inspection. “We found that there was a large decline in the number of food facility inspections conducted by FDA over a five-year period, as well as a decline in the number of violations identified by FDA inspectors,” Nudelman noted. And when FDA identified violations, she said, it “did not routinely take swift and effective action to ensure that these violations were remedied.”

Many of the problems would be fixed by the House bill, which requires each food facility to register annually with FDA and pay a registration fee, FDA’s Taylor noted. Those fees would help pay for more inspections, he said. The Senate version of the bill, however, does not include such fees. It is unclear how FDA would pay for more inspections if those fees don’t make it into the final bill, Rep. John Dingell (D-Mich.), a sponsor of H.R. 2749, pointed out.

Other lawmakers at the hearing brought up the fact that the food safety bill does not address the creation of a single food agency. The U.S. food safety system is fragmented, with responsibilities divided among multiple federal agencies, including FDA and USDA. Currently FDA is responsible for about 80% of the food supply.

“With 15 federal agencies already administering at least 30 federal laws concerning food safety, I’m concerned of the prospect of an increased size of the bureaucracy, budget, and statutory authority for the FDA,” Rep. Bob Latta (R-Ohio) said in his opening statement.

Nonetheless, H.R. 2749 “contains critical fixes,” emphasized Rep. Henry A. Waxman (D-Calif.), chairman of the House Energy & Commerce Committee. Even if it can’t fix everything, the bill would give FDA new authorities, such as access to company records and the ability to recall unsafe food, and it would increase civil penalties against facilities that break the law, he noted.

“Without legislative action, it is not a matter of if but when more lives will be put at risk by another outbreak,” House oversight subcommittee Chairman Bart T. Stupak (D-Mich.) stressed, urging the Senate to pass an effective food safety bill. “We cannot put off action any longer.”