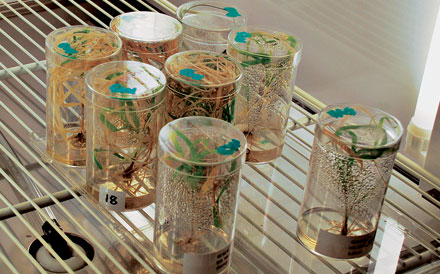 Credit: Melody Voith/C&EN
Agrivida’s switchgrass plants are designed to break down their cell walls when triggered by heat.

When Jeremy Johnson and R. Michael Raab founded Agrivida in 2005, they were still finishing their Ph.D.s at Massachusetts Institute of Technology. Although both are chemical engineers, they based their start-up not on chemical plant technology, but on a technology for making chemicals in plants.

The work, Johnson says, is a sort of homecoming for a kid from Kansas who grew up working on a small dairy farm. And it is farmers who would benefit from Agrivida’s products. The company is developing specialized crops that manufacture their own enzymes to more easily convert their cellulose into sugars for ethanol production.

Agrivida is one of a number of plant biotechnology firms that are hoping to leapfrog current technologies. Making today’s biobased fuels and materials involves growing crops and then using physical and chemical means to extract sugars that can be fermented into the desired product. The firm’s goal is to make plants do more of the manufacturing work.

For example, biobased plastics firm Metabolix is growing polyhydroxyalkanoate (PHA) resins in switchgrass, and the firm sees a future in biorefineries based on such modified crops. Other companies are forming partnerships in an attempt to engineer chemicals inside crops.

Syngenta is collaborating with research firm Edenspace Systems to develop easier-to-process plants for fuel production. Plant biotech start-up Ceres has worked with Rohm and Haas, now Dow Chemical, to determine whether energy crops could simultaneously produce methacrylate monomers. And Mendel Biotechnology has a partnership with BP to improve dedicated energy crops to speed reactions that break down cellulose and lignin.

Turning crops such as corn, switchgrass, miscanthus, and sorghum into living chemical factories holds the promise of lowering processing costs for renewable fuels and chemicals, proponents contend. Industry analysts agree that the plant biotechnology developments are showing early successes, and they confirm there would be strong demand for the plant-made products.

But for biobased technologies to displace petroleum, farmers will need to gamble on new, risky crops planted on vast acreages. And the new traits do not address questions that face the broader push for cellulose-based fuels and chemicals, including how processors will access and efficiently transport cellulosic feedstocks (C&EN, April 27, 2009, page 10).

It will be a few years before farmers have the chance to plant the new chemical-making crops. In the meantime, research and development of new traits is moving at a brisk pace in the labs of Agrivida and Metabolix, both located near MIT in Cambridge, Mass. 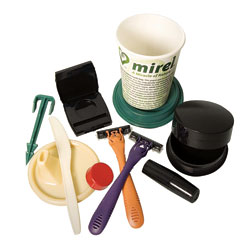 At first glance, the activities at Agrivida’s headquarters look like those at any other analytical lab. Scientists watch over automated machines pipetting small amounts of liquid for screening tests, while biological samples grow in stacks of petri dishes. But a visitor might note a curious-looking plant in the corner. The 4-foot-tall sorghum specimen is a source of genetic material for a team of DNA-transfer experts.

Johnson explains that the researchers are working to modify plant genes to produce a specialized enzyme that breaks down the cellulose in the cell wall. In addition to the enzyme, Agrivida will insert a switch, made from a protein segment, that activates the enzyme under specific conditions.

“Cell-wall-degrading enzymes, though desirable for sugar production, are bad for plant growth,” Johnson points out. With the addition of the enzyme alone, plants soon become limp and die. To preserve plant growth, the company is working with enzyme-arresting protein segments called inteins. “An intein is a peptide sequence within a protein that has the ability to cleave itself out and reconnect the rest of the sequence. That way there is no negative impact on the plant when it is inactive,” Johnson says.

The switch can be designed to splice out under different conditions, such as by heating a crop after it is harvested. Then the activated enzymes would begin to degrade the cell wall and make sugar from the cellulose.

Johnson’s team is working with wild-type enzymes and a selection of the 400 known inteins to find a pair that combines low initial enzymatic activity with high sugar production after the switch is triggered. The result for a cellulosic ethanol maker would be to reduce the need for expensive added enzymes, which can cost up to 70 cents per gal of ethanol. In addition, Johnson says, the sugar could be obtained with less mechanical, thermal, or chemical processing of the plant biomass.

The plants are not yet commercially viable. But Johnson says lab tests show that the modified samples produce a larger amount of sugar than control plants in cases where no enzymes are added, as well as when some or a lot of enzymes are added.

In contrast to Agrivida’s focus on sugar, Metabolix is working to produce plastics and chemicals in plants. The company currently uses sugar as a feedstock to manufacture its biodegradable plastic, a PHA resin called Mirel, through microbial fermentation. Its joint venture with Archer Daniels Midland recently started producing Mirel at a 110 million-lb-per-year facility in Clinton, Iowa.

In March, Metabolix told investors it had successfully produced PHA inside switchgrass plants at a dry weight concentration of 6%. The company can also produce PHA in oil seeds and sugarcane. “Our goal is to get to commercially viable crops in field trials within two years,” says Metabolix Chief Executive Officer Richard Eno. By then, he tells C&EN, the firm will have increased PHA content to a level where producing it inside of plants will be more cost-competitive than fermentation. 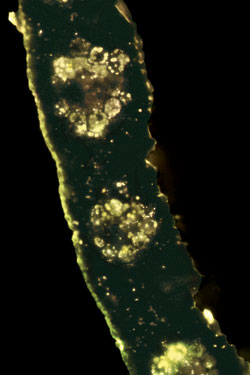 Credit: Metabolix
Metabolix has engineered switchgrass to manufacture PHA, as shown in this micrograph.

To get the most value from the plastic-producing crops, Eno says, they could be processed in a biorefinery. “We would harvest the plants, recover the PHA, and convert it to either polymers or industrial chemicals,” he says. The rest of the plant biomass, he adds, could be used for cellulosic ethanol, gasification, or for fuel in the refinery.

Metabolix is already finding a market for the relatively costly PHA made by fermentation, according to Laurence Alexander, chemicals analyst at the investment firm Jefferies & Co. He told investors recently that with recent Food & Drug Administration approval for Mirel in food contact applications, the firm’s addressable market size is about 4 billion lb per year. “Indicated customer interest to date should suffice to sell out the first commercial plant and justify expansions,” he predicted.

But as other firms enter the biobased plastics market, Metabolix will need to compete on price. “Right now, PHA can withstand a certain premium in consumer products because it is biobased and biodegradable,” says Samhitha Udupa, biobased materials analyst at Lux Research. “But that won’t last more than five to seven years.” Udupa says engineered crops may help get the price down, but she questions the scale the company would have to achieve to gain a sizable share of the polymers market.

All of the plant-based technologies face the same problem of reaching significant scale, Udupa says. “In recent years, venture capitalists and governments have been investing heavily in technology to convert biomass or sugar to chemicals or fuel. We’ve focused on how to get there but not on how much stuff goes into the front end.” The challenge, she says, is growing and accessing the large amount of biomass that would be needed to displace a meaningful amount of petroleum.

At Mendel, Donald M. Panter, senior vice president for bioenergy seeds, is optimistic that farmers will want to plant perennial grasses modified for energy production because they can “make use of secondary land without using inputs or taking away from the food and fiber supply chain.” According to the Department of Agriculture, 38 million acres of idled cropland is available for growing energy crops, if farmers feel they would make a profit.

Large agriculture businesses such as seed firm Monsanto and ethanol giant Poet would make good partners for the biotech firms, Udupa says, because they already have supply chains and distribution channels in place. Johnson agrees, and says Agrivida is looking to enter licensing deals with a large seed company or processor.

Plant biotech executives insist that the industry as a whole is developing more efficient technologies and processes that will make growing, collecting, and processing biomass for energy and chemicals profitable. But for now, the promise of large-scale cellulosic fuel production has yet to be fulfilled, and that concerns Johnson. “For our model to be truly successful, we’ll be somewhat dependent on the success of others,” he says.