W.R. Grace leverages its materials expertise to expand into the instrumentation market 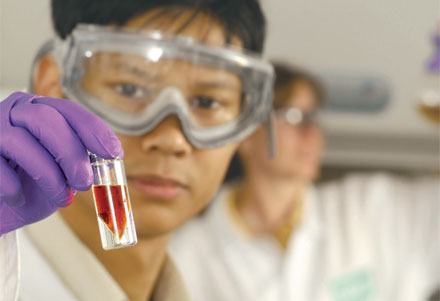 Few chemical companies have dared to venture into the scientific instrument market. Most prefer to stick with businesses they are familiar with and leave instruments to specialists such as Thermo Fisher Scientific, Agilent, and Waters.

But about nine years ago, W.R. Grace & Co., a $2.8 billion-per-year maker of specialty materials and chemicals, seized an opportunity to get into chromatography, the science of separating mixtures for purification or analysis. It has since acquired six chromatography column and instrument companies. “We like the business because of its high growth rates and margins,” says Gregory E. Poling, president of Davison, a Grace division best known as a maker of petroleum refining and polymer catalysts.

The chemical firms involved with scientific instruments can be counted on one hand. DuPont, for example, has the Bax line of food and environmental pathogen detection instruments. German coatings maker Altana sells a line of paint quality assurance instruments.

For Grace, chromatography was a logical extension of its silica business. The firm is a large maker of precipitated and colloidal silica. And, Poling points out, Grace is also the world’s largest producer of silica gel, which has a variety of purposes, including in chromatography columns, where it is used to isolate components of a complex mixture. The quality of the separation depends on the particle size, pore size, and treatment of the silica. Grace’s skill, which other instrument makers do not have, is in preparing grades of silica for use in chromatography columns.

Grace’s roots in silica go back to the 1920s. Its silica is used to support refinery catalysts and to reinforce tires. It is also used as an abrasive in toothpaste and as a filter in beer-making.

Grace began its separations foray in 2001 with the acquisition of the Separations Group, a Hesperia, Calif.-based maker of chromatography columns and separation media used in chemical, petroleum, environmental, and life sciences applications. At the time, Poling was general manager of Grace’s silica products business. In a press release, he was quoted as saying that the Separations Group, with about $6 million in annual revenues, “fits perfectly into our strategy to develop our businesses in high-growth markets that complement our existing products, technologies, and competencies.”

Poling says his attitude toward chromatography hasn’t changed since then. Despite being in bankruptcy reorganization since 2001 because of asbestos liabilities, Grace has continued to add to its chromatography capabilities through a series of small acquisitions.

In 2003, the firm acquired Germany-based Grom Analytic + HPLC, MODcol Corp., and the Jones Chromatography high-performance liquid chromatography line. The following year it added Deerfield, Ill.-based Alltech. It capped its acquisition spree in 2005 with the purchase of Flexit Laboratories, an India-based maker of chromatography products.

The firm does not disclose annual sales of the chromatography businesses, collectively known as Grace Davison Discovery Sciences. For accounting purposes, chromatography is part of Grace’s specialty technologies business, which includes polymer catalysts and had sales last year of $337 million.

Poling says Grace continues to sell silica to other chromatography column makers despite competing against them. “But frankly,” he says, “that business is not that big, and we feel the chromatography opportunity is the bigger one for us.”

Other big silica makers, such as Evonik Industries and U.S. Silica, stick to what they do best, notes Stefan Fritsch, editor of Instrument News, a periodical that covers the scientific instrument field. Grace may consider in-house silica production an advantage in the chromatography market, but Fritsch says the art of column packing and design is more important.

That is a perception Grace hopes to change with its Reveleris system, says Joanne Green, general manager of Grace Davison Discovery Sciences. Introduced in March 2009, the system uses a proprietary detection technology “to produce more samples with fewer impurities in less time,” she says. As a result, pharmaceutical companies can “bring important new drugs to market more quickly,” she adds.

Whereas most other firms in the chromatography business got there as instrumentation makers, Grace arrived via its expertise in materials science. Now, Poling is looking for other opportunities to link the firm’s chemical and instrumentation skills. “We have the capability to make the instrument, do the software, and modify the material,” he says.