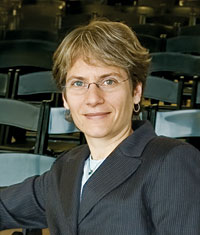 Carolyn R. Bertozzi, the T. Z. & Irmgard Chu Distinguished Professor of Chemistry and Professor of Molecular & Cell Biology at the University of California, Berkeley, has won the 2010 Lemelson-MIT Prize. Bertozzi, who also serves as director of Lawrence Berkeley National Laboratory's Molecular Foundry, a national nanoscience institute, was selected to receive the $500,000 award in recognition of her advances in "manipulating processes within living cells to engineer their surfaces and secreted proteins" and for those discoveries' "proven potential for future advances," according to the Lemelson-MIT Program, which sponsors the prize.

The prize recognizes creative researchers "whose work has improved our lives through invention," according to the program's website. Bertozzi's research efforts capitalize on insights derived from cellular chemical processes to develop new diagnoses and treatments for diseases such as cancer, arthritis, and tuberculosis.

One of the main thrusts of Bertozzi's work is developing tools for early detection of cancer. Her aim is to take advantage of clinical imaging technologies, such as magnetic resonance imaging (MRI) and positron emission tomography (PET), to recognize diseased tissue and thereby help sidestep the need to do surgery in search of cancerous cells.

At the heart of Bertozzi's cancer-detection strategy are metabolic processes in cells that convert simple sugars into polymers that migrate to the cell's exterior surface. The Berkeley researcher's group developed methodologies to attach distinct chemical functional groups to sugars, inject those sugars into cells, and cause the cells to metabolize the modified sugars and incorporate them into cell-surface polysaccharides. By functionalizing sugars known to be associated with cancerous cells, this "bioorthogonal" chemical strategy, as Bertozzi has named it, specifically selects cancer cells for tagging with probe molecules, such as radiolabeled species for PET or magnetic compounds for MRI.

Bertozzi and coworkers are also recognized for inventing genetically encoded aldehyde tag technology, which provides a novel route to protein engineering. This technology is being commercialized by Bertozzi's start-up company, Redwood Bioscience, which is developing new types of protein drugs that exhibit properties that are inaccessible to conventional molecular biology approaches. In addition to these accomplishments, Bertozzi has also invented bionanotechnology tools and artificial-bone materials.

Asked to describe her reaction upon learning she had won the prize, Bertozzi says, "This came completely out of the sky—it's totally stunning news."

The prize will be presented to Bertozzi at Massachusetts Institute of Technology during the Lemelson-MIT Program's fourth annual EurekaFest. The event, which runs on June 16–19, is described by the program as "a multi-day celebration of the inventive spirit."