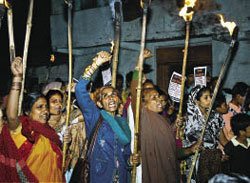 Credit: Jean-François Tremblay/C&EN
Demonstrators protest at a 2005 march in Bhopal.

The Bhopal District Court of India has ruled that seven former officials of Union Carbide India are guilty of criminal negligence in the chemical leak disaster that killed thousands in December 1984. The court sentenced them to two years in prison, the maximum allowed.

The ruling, by Chief Judicial Magistrate Mohan P. Tiwari, concerns a criminal case filed in 1987 by India’s Central Bureau of Investigation, the country’s equivalent of the FBI. In the course of the 23-year case, India failed to secure the extradition of Warren Anderson, the now-89-year-old former chairman of Union Carbide, who is described as an “absconder” from justice in the ruling. Over the years, the hot-button case has passed from one judge to another more than a dozen times.

Those sentenced include Union Carbide India’s then-chairman, Keshub Mahindra, and six other former senior officials. They all posted bail and have 30 days to file an appeal.

In his 95-page ruling, Tiwari said the defendants “omitted to do what they were entrusted to do.” Their company failed to anticipate the possibility of a large-scale leak of methyl isocyanate (MIC) and to fit the plant with suitable countermeasures. Tiwari moreover determined that Union Carbide was storing MIC in excessive quantities, that it had allowed maintenance and training to deteriorate, and that a critical refrigeration system was not working at the time of the accident.

Protesting outside the court, activists representing victims of the tragedy expressed outrage at the sentence. They said the former Carbide officials should have been accused of the more serious charge of “culpable homicide amounting to murder,” which carries far heavier penalties, and that they should not have been offered bail.

Safety
COVID-19 pandemic has spurred materials researchers to develop antiviral masks
Industrial Safety
The chemistry behind the Beirut explosion
Consumer Safety
Do we know enough about the safety of quat disinfectants?
Share X
To send an e-mail to multiple recipients, separate e-mail addresses with a comma, semicolon, or both.
Title: Court Convicts Bhopal Managers
Author: Jean-François Tremblay
Chemical & Engineering News will not share your email address with any other person or company.