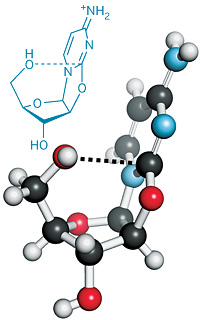 Electron delocalization might have been crucial to the chemistry that started life on Earth, reports a team led by Ronald T. Raines of the University of Wisconsin, Madison, and John D. Sutherland of the University of Manchester, in England (ACS Chem. Biol., DOI: 10.1021/cb100093g). Last year, Sutherland’s team developed a recipe for ribonucleotides that offered a plausible explanation of how a primitive Earth could have spawned starter life forms based on RNA (C&EN, May 18, 2009, page 40). At one point in Sutherland’s synthesis, a phosphate group gets attached to a secondary alcohol of a nucleoside intermediate, despite the presence of a more reactive primary alcohol. Now, the team thinks they understand why. A lone pair of the oxygen from the primary alcohol interacts with the antibonding orbital of a nearby carbon-nitrogen double bond, according to a crystal structure of the nucleoside and theoretical calculations. That delocalization diminishes the primary alcohol’s reactivity, allowing phosphorylation on the secondary alcohol instead. Until now, this type of interaction hasn’t been invoked as a way to control nucleic acid reactivity, the team notes.