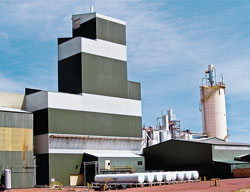 Manufacturers of sodium bicarbonate, the white powder typically found in the yellow box at the back of the refrigerator, are anticipating a jump in use for a very different application.

Makers of the common household compound, also known as baking soda, expect coal-fired power plants and other industrial facilities to embrace it as a means of treating harmful air emissions such as sulfur dioxide. Sodium bicarbonate neutralizes the gases in the same way it reacts with acid in a person’s stomach.

Earlier this month, the Environmental Protection Agency set the National Ambient Air Quality Standard for sulfur dioxide at 75 parts per billion over a one-hour period. Until that takes effect in 2012, the current standard is 500 ppb for a three-hour window, says Chad Daniel, senior environmental scientist with Stanley Consultants, an engineering and environmental services firm in Iowa.

Modifications to the National Emission Standards for Hazardous Air Pollutants and other environmental regulations set to be enforced in coming years will further restrict the amount of SO2 and other acidic gases that plants can release into the air. Sodium bicarbonate is currently a minor player in the sulfur removal market, but producers expect the material to become increasingly cost-effective as standards tighten.

Solvay Chemicals is placing a big bet on this prospect. Early this spring, the company opened a sodium bicarbonate plant in Green River, Wyo. The $26 million facility can produce 125,000 tons of bicarbonate per year.

“We have seen only marginal demand increases now, as the regulations have not yet tightened,” says Mike Wood, senior business manager for SolvAir Products, a subsidiary of Belgium-based Solvay that markets materials for controlling air pollution. “As the regulations tighten or go into effect, we feel the demand will increase significantly,” he adds.

Today, most power plants use lime or trona—a mineral that is roughly half sodium bicarbonate and half sodium carbonate—to control flue gas. Operators typically employ a dry injection system to blow the sorbent into a plant’s sulfur-rich exhaust before it exits to the atmosphere. “It’s an acid-base reaction,” Wood explains. The resulting salt is removed via an electrostatic precipitator or other fabric filter.

But in the future, factories and power plants are expected to need a higher purity product to do a better job than trona, the most common sorbent used today. “At certain points, depending on the system, trona becomes so inefficient that sodium bicarbonate,” the more expensive sorbent, “is actually better,” Wood says. Sodium bicarbonate can remove up to 99.5% of the SO2 from a smokestack, he adds.

Power plant operators aiming to lower emissions do have options other than sorbent-based technologies. Art Esposito, senior director of business development at Church & Dwight, the Western Hemisphere’s largest producer of sodium bicarbonate, says plants can turn to a cleaner-burning fuel source, buy emission-trading credits, or shut down if capacity isn’t needed. Esposito explains that operators are waiting for pending laws to be finalized before choosing an approach.

Although Solvay’s competitors are hopeful about the air pollution market, they have yet to make similar investments in anticipation of growth. “We’ve evaluated a number of different options, but I couldn’t go public with any of our plans,” Esposito says.

The traditional method of making sodium bicarbonate is to heat raw trona—mined from 900 to 1,500 feet underground—to drive off excess water and carbon dioxide. The result is soda ash, Na2CO3, which is most often used to make glass. Soda ash is mixed with CO2 and water, which react to create sodium bicarbonate, NaHCO3.

In its new plant, Solvay uses a different method to make bicarbonate. It takes a waste stream from its Green River soda ash production and adds CO2 to turn it into bicarbonate there.

Natural Soda also has a novel production technique. It uses water to solution-mine nahcolite, the mineral form of sodium bicarbonate, from the ground. Workers heat and cool the solution to crystallize sodium bicarbonate. “Our manufacturing process has long been recognized as cost-effective relative to our competitors,” Warneke claims.

Even though air pollution rules are still pending, sodium bicarbonate producers expect to cash in when the market shifts their way. “We’re in a holding pattern in a big way on federal regulations that will dictate the compliance standards for these various facilities,” Church & Dwight’s Esposito says. “But it’s fair to say that the interest level and the awareness and potential demand are gaining momentum.”

Pollution
Air pollution hurts honeybees
Greenhouse Gases
One carbon capture project stalls as another advances
Pollution
Satellites can now see air pollution inequality within cities
Share X
To send an e-mail to multiple recipients, separate e-mail addresses with a comma, semicolon, or both.
Title: Familiar Product, Different Use
Author: David Pittman
Chemical & Engineering News will not share your email address with any other person or company.